Long before the events of Ferguson and the ascendancy of the Black Lives Matter movement, the city of Oakland, California was notorious for having both a high crime rate and a police force that was ridden with scandals involving prostitution, evidence tampering and brutality. In 2002, the department was put under federal oversight and given a mandate to reform under the threat of a complete takeover. This did not stem the tide of problems and the next decade saw a number of troubling incidents (including one that inspired the film “Fruitvale Station”) and a revolving door of police chiefs who failed to inspire much trust in the local populace. Was it possible to implement any real and significant reforms or was the system as a whole so inherently flawed that it is beyond repair? The fascinating new documentary “The Force” offers viewers the chance to ponder that question, while giving an eye-opening view of an ambitious attempt at department reform that observes what went right and what went terribly wrong.

The focus of the film is on the tenure of Sean Whent, who was installed as police chief in 2013, promising a complete reform of the entire department. Realizing that one of his biggest problems was the complete mistrust that the citizens had towards the cops thanks to decades of troubles, Whent employs a series of new policies meant to mend fences with the community. They range from a crackdown on police silence towards the misdeeds of their colleagues to the implementation of body cams to outreach programs designed to give civilians the chance to voice their frustrations and complaints about the department. With new recruits, he tries to instill in them an understanding about the needs and concerns of the community and tries to impress upon them the importance of a less-aggressive approach to policing.

Between the force’s bad reputation and chronic understaffing, Whent’s ambitions might have struck some as pipe dreams but his efforts did have some immediate and impressive results—a 60% drop in complaints against officers, a complete halt in incidents with officers shooting suspects and a general drop in the crime rate. Whent’s efforts receive worldwide attention (we see him being interviewed for French television) and, more importantly, they even inspire the beginnings of a newfound sense of trust from the community. Alas, it doesn’t last. After a couple of years, the number of controversial officer-related shootings begins to rise—one is shot in the back while the other was revealed to be carrying a replica pistol. Later it is revealed that several cops were involved with sexual misconduct with an underage prostitute, igniting a scandal that winds up taking down Whent when it is suggested that he tried to protect the accused in order to prevent the derailing of his reform efforts.

Employing a cinema vérité approach to the material, director Peter Nicks (who won the Best Director prize for documentaries at this year’s Sundance Film Festival) quietly observes all of these goings-on, giving voice to the police and the community of Oakland without offering any overt commentary of its own. From what we see, however, it slowly becomes evident that Whent’s reform efforts, no matter their good intentions and initial success, were doomed to eventually fail because the recruits arriving already possessing the kind of aggressive mindset that is difficult to fully overcome. In one especially revealing episode, we witness a class where the recruits are presented dash cam video showing a suspect getting out of a car against police orders while holding something that proved to be a knife and being shot 13 times. Were all 13 shots really necessary, especially since the suspect was far enough away to not be able to do anything with the knife? Could it have been handled with one shot or, God forbid, no shooting at all? For most of the cops, they have no problem with what would appear to be a case of excessive force (when reminded that the suspect had a knife, not a gun, one cop exclaims “He could throw it!”) Meanwhile, a black female recruit tries to get a word in edgewise to raise her objections to the shooting—the same complaints that the community has been voicing for years—but finds herself shouted down or simply ignored by most of her colleagues. It is a moment that is both heartbreaking and anger-inducing, a perfect encapsulation of the kind of mindset that leads so many people today to have a lack of faith that the police have their best interests at heart.

The only time that “The Force” steps wrong is in the final scenes dealing with the ever-widening sex scandal and the turmoil that the department is plunged into as a result. The problem is that a torrent of new information is suddenly thrown at us in a manner that the fly-on-the-wall directorial approach is not especially well-equipped to handle—it cries out for a switch to a more investigative viewpoint that would help better process all the details, especially regarding what Whent may or may not have done once the scandal hit. Beyond that, this is a strong film that tackles a charged subject in a fair and even-handed manner. "The Force" will give viewers of all social and political persuasions much to think about afterwards. 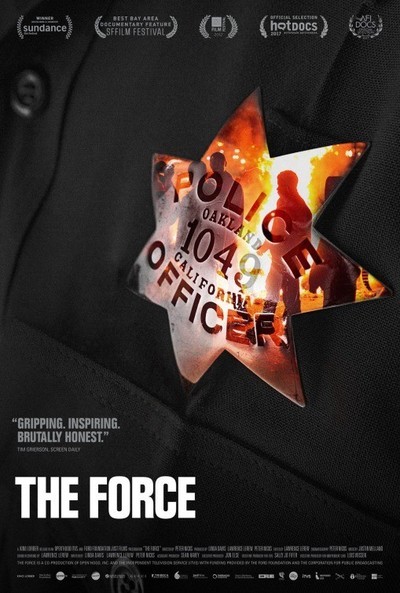