A superhero with a super-hangover

I have been waiting for this for years: a superhero movie where the actions of the superheroes have consequences in the real world. They always leave a wake of crashed cars, bursting fire hydrants, exploding gas stations and toppling bridges behind them and never go back to clean up. But John Hancock, the hero of “Hancock,” doesn’t get away with anything. One heroic stunt ran up a cost price tag of $7 million, he’s got hundreds of lawsuits pending, and when he saves a stranded whale by throwing it back into the sea, you can bet he gets billed for the yacht it lands on.

“Hancock,” the latest star showcase for Will Smith, has him playing a SkidRow drunk with superpowers and a super hangover. He does well, but there are always consequences, like when he saves a man whose car is about to be struck by a train, but causes a train wreck. What he needs is a good PR man. Luckily, the man whose life he saved is exactly that. He’s Ray Embrey (Jason Bateman, the adoptive father in “Juno”), and Ray has a brainstorm: He’ll repay Hancock by giving him a complete image makeover. If this sounds like a slapstick comedy, strangely enough, it isn’t. The movie has a lot of laughs, but Smith avoids playing Hancock as a goofball and shapes him as serious, thoughtful and depressed.

Embrey the PR whiz brings Hancock home to dinner to meet his wife, Mary (Charlize Theron), and son Aaron (Jae Head). The first time she meets him, Mary gives Hancock an odd, penetrating look. Also the second time and also the third time. OK, OK, already: We get it. One odd, penetrating look after another. They have some kind of a history, but Hancock doesn’t know about it, and Mary’s not talking.

She has a lot to keep quiet about, although thank goodness, she eventually opens up or the movie wouldn’t have a second half. I will not reveal what she says, of course, because her surprise is part of the fun. I am willing to divulge some of the setup, with Ray coaching Hancock to start saying “thank you” and “you did a good job here,” and stop flying down out of the sky and crushing $100,000 cars. Ray also gets him a makeover: Gone is the flophouse wardrobe, replaced by a slick gold leather costume, and Hancock gets a shave, too. Does it himself, with his fingernails.

He appeared some 80 years ago in Miami, as far as he knows. He doesn’t know very far. He has no idea where his powers came from, or why he never grows any older. He can fly at supersonic speeds, stop a speeding locomotive, toss cars around, and in general, do everything Superman could do, but not as cleanly, neatly or politely. Part of his reform involves turning himself in to the law and serving a prison term, although the chief of police has to summon him from prison to help with a bank hostage crisis. (In prison, there’s a guy named Man Mountain who must not read the papers, or he would never, ever try to make Hancock his victim.)

It’s not long after the bank hostage business that Mary reveals her secret, Hancock starts asking deep questions about himself, and the movie takes an odd, penetrating turn. This is the part I won’t get into, except to say that the origin stories of superheroes consistently underwhelm me, and Hancock’s is one of the most arbitrary. Even Mary, who knows all about him, doesn’t know all that much, and I have a shiny new dime here for any viewer of the movie who can explain exactly how Hancock came into being.

Not that it matters much, anyway. I guess he had to come into being somehow, and this movie’s explanation is as likely as most, which is to say, completely preposterous. Still, “Hancock” is a lot of fun, if perhaps a little top-heavy with stuff being destroyed. Smith makes the character more subtle than he has to be, more filled with self-doubt, more willing to learn. Jason Bateman is persuasive and helpful on the PR front, and it turns out Charlize Theron has a great deal to feel odd and penetrating about. 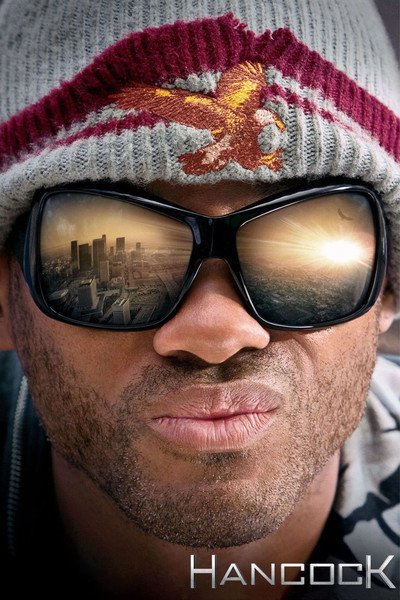 Will Smith as John Hancock