Written on the Wind

Opinion on the melodramas of Douglas Sirk has flip-flopped since his key films were released in the 1950s. At the time, critics ridiculed them and the public lapped them up. Today most viewers dismiss them as pop trash, but in serious film circles Sirk is considered a great filmmaker--a German who fled Hitler to become the sly subverter of American postwar materialism.

One cold night this winter, I went up to the Everyman Cinema in Hampstead, north of London, to see a revival of a restored print of Sirk's “Written on the Wind” (1956). This is a perverse and wickedly funny melodrama in which you can find the seeds of “Dallas,” “Dynasty,” and all the other prime-time soaps. Sirk is the one who established their tone, in which shocking behavior is treated with passionate solemnity, while parody burbles beneath.

All the reviews of this movie seem to involve lists: It's about wealth, alcoholism, nymphomania, impotence, suicide, and veiled elements of incest and homosexuality. And the theme song, by Sammy Cahn, is sung by the Four Aces. The pieces are in place for a film you can mock and patronize. But my fellow audience members sat in appreciative silence (all right, they snickered a little when Rock Hudson is told it's time to get married and replies, “I have trouble enough just finding oil”).

To appreciate a film like “Written on the Wind” probably takes more sophistication than to understand one of Ingmar Bergman's masterpieces, because Bergman's themes are visible and underlined, while with Sirk the style conceals the message. His interiors are wildly over the top, and his exteriors are phony--he wants you to notice the artifice, to see that he's not using realism but an exaggerated Hollywood studio style. The Manhattan skyline in an early scene is obviously a painted backdrop. The rear-projected traffic uses cars that are 10 years too old. The swimming hole at the river, where the characters make youthful promises they later regret, is obviously a tank on a sound stage with fake scenery behind it.

The actors are as artificial as the settings. They look like Photoplay covers, and speak in the clichés of pulp romance. Sirk did not cast his films by accident, and one of the pleasures of “Written on the Wind” is the way he exaggerates the natural qualities of his actors and then uses them ironically.

The film stars Rock Hudson as Mitch Wayne (think about that name), who grew up poor on the Texas ranch owned by oil millionaire Jasper Hadley (Robert Keith). He's been raised with Jasper's son Kyle (Robert Stack) and daughter Marylee (Dorothy Malone). Now Mitch holds an important post in the Hadley Oil empire, which requires him to wear a baseball cap and keep a yellow pencil parked over his ear, while studying geological maps. Kyle has turned into a drunken playboy, and Marylee into a drunken nympho.

As the film opens, Mitch and Kyle are in New York, where they both fall in love with the trim, intelligent Lucy Moore (Lauren Bacall). When she tells Kyle she wants to work in advertising, he picks up the phone to buy her an agency. She demurs. All three have lunch at 21, and then Kyle sends Mitch to buy cigarettes while he whisks Lucy off in a cab to the airport, where Mitch (who knows his tricks) is there ahead of them on the Hadley plane. Kyle pilots it himself, flying them to Miami Beach while confessing to Lucy, “I drink too much” and “Nobody has ever listened to me the way you do.” Of Mitch Wayne, he says: “He's eccentric. He's poor.” The terms are synonymous.

In Miami Beach, they check into a Hadley hotel, where the manager announces “Miss Moore's suite” while the music swells in materialistic ecstasy, and Kyle shows Lucy closets full of designer gowns, drawers full of purses and trays of jewelry, and asks her to prepare for dinner. Half an hour later (after dressing with Mitch in the suite they ... share), Kyle enters Lucy's suite, calling out, “Are you decent?” Discovering she has left for the airport, he muses, “I guess she was.”

Miami Beach was a painted backdrop. Texas, apart from a few shots of sports cars racing past oil derricks, is all built on the back lot. The plot heats up. Marylee has had a crush on Mitch since childhood, and wants to marry him. So great is her need, indeed, that when she sashays around in low-cut dresses, her knees almost buckle under the weight of her lust (Malone won an Oscar for the performance).

Kyle goes on the wagon, until a doctor unwisely informs him he is impotent. Well, not completely impotent--there is a “problem,” but a baby is “possible.” Kyle doesn't wait for the footnotes before racing to the country club to resume his boozing, and when Lucy tells him she's pregnant, he assumes the father is Mitch--a suspicion encouraged by Marylee, who wants Lucy off the ranch so she can regain possession of her childhood friends.

If I smile as I synopsize the plot, surely Sirk was smiling when he directed it; he's subverting the very lifestyle he celebrates. His use of artificial and contrived effects, colors and plot devices is “a screaming Brechtian essay on the shared impotence of American family and business life,” says film critic Dave Kehr, and encompasses deliberate distancing “that draws attention to the artificiality of the film medium, in turn commenting on the hollowness of middle-class American life” (Cinebooks). Well, yes, but it's possible to enjoy Sirk's subtleties as simple entertainment, too. Films like this are both above and below middle-brow taste. If you only see the surface, it's trashy soap opera. If you can see the style, the absurdity, the exaggeration and the satirical humor, it's subversive of all the 1950s dramas that handled such material solemnly. William Inge and Tennessee Williams were taken with great seriousness during the decade, but Sirk kids their Freudian hysteria (that Williams' work survives is a tribute to his poetry, not his common sense).

One test of satire is: At what point do we realize the author is kidding? There's a clue here in an early remark by Mitch to Lucy: “Are you looking for laughs? Or are you soul-searching?” And in the way the old swimming hole represents lost innocence and promise for Marylee. In one of the film's more lurid sequences, Sirk uses a closeup of her face in orgiastic nostalgia, as we hear little Mitch's childish voice piping out a promise to marry Marylee when they grow up. “How far we've come from the river!” Mitch later tells her.

There's a broad wink and nudge at the end. Old Jasper Hadley is often seen behind his desk, which holds a large bronze model of an oil derrick. (A portrait on his wall shows him at the same desk with the same bronze--a barbershop mirror effect.) At the end of the film, after Marylee's rivals have won, she is left alone in her father's office, where she caresses the erect derrick--first sadly, then tenderly.

To appreciate the trashiness of “Written on the Wind” is not to condescend to it. To a greater degree than we realize, our lives and decisions are formed by pop cliches and conventions. Films that exaggerate our fantasies help us to see them--to be amused by them, and by ourselves. They clear the air.

Douglas Sirk (1900-1987) had two careers. His first 37 years were spent in Germany, where he worked as a stage director, specializing in classics. His first American film was “Hitler's Madmen” (1943), and his critical reputation is based on a series of enormously popular melodramas he made for Universal, including “All I Desire” (1953), “Magnificent Obsession” (1954), “All That Heaven Allows” (1955) and “Imitation of Life” (1959). He also made Westerns, musicals and war stories, working with Hudson more often than any other star--perhaps appreciating the way Hudson's concealed homosexuality worked subtly to subvert the stock characters he often played.

Rainer Werner Fassbinder, another German obsessed with American forms of melodrama, said Sirk was the greatest influence on his work. Certainly Sirk was the father of prime-time TV soaps. “I have seen `Written on the Wind' a thousand times,” the Spanish director Pedro Almodovar said, “and I cannot wait to see it again.” Sirk's style spread so pervasively that nobody could do melodrama with a straight face after him. In countless ways visible and invisible, Sirk's sly subversion skewed American popular culture, and helped launch a new age of irony. 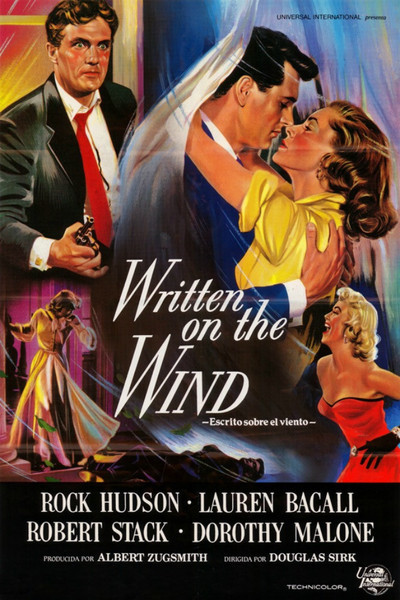