Movie lore has it that Bela Lugosi could barely speak English when he was chosen by Universal Pictures to star in "Dracula" (1931). Lon Chaney had been scheduled to play the role, a wise casting decision after his success in the silent classics "The Hunchback of Notre Dame” and "The Phantom of the Opera.” But he died as "Dracula” was going into production, and the mysterious 49-year-old Hungarian, who starred in a 1927 Broadway production of "Dracula,” was cast. Legend must exaggerate, because the Hungarian emigre Lugosi had been living and working in the United States for a decade by the time the film was made, and yet there is something about his line readings that suggests a man who comes sideways to English--perhaps because in his lonely Transylvanian castle, Dracula has had centuries to study it but few opportunities to practice it.

What was new about the film was sound. It was the first talking picture based on Bram Stoker's novel, and somehow Count Dracula was more fearsome when you could hear him--not an inhuman monster, but a human one, whose painfully articulated sentences mocked the conventions of drawing room society. And here Lugosi's accent and his stiffness in English were advantages.

Lugosi was by all accounts a strange, deliberately theatrical man, who drew attention to himself with stylized behavior. He made his foreignness an asset, and in Hollywood and New York used his sinister, self-mocking accent to advantage. After the success of "Dracula,” he often appeared in public dressed formally, with a flowing cape, as if still playing the role. In later life, addicted to drugs, he was reduced to self-parody, and a glimpse of his last years can be found in "Ed Wood” (1994), set during his last picture.

The vampire Dracula has been the subject of more than 30 films; something deep within the legend is suited to cinema. Perhaps it is the joining of eroticism with terror. The vampire's attack is not specifically sexual, but in drinking the blood of his victims he is engaged in the most intimate of embraces, and no doubt there is an instinctive connection between losing your virginity (and your soul) and becoming one of the undead. Vampirism is like elegant, slow-motion rape, done politely by a creature who charms you into surrender.

The Dracula myth has been filmed so often, in so many different ways (most recently by Francis Ford Coppola in his "Bram Stoker's Dracula,” 1992), that its material has become like an opera libretto, or a play by Shakespeare: We know the story and all the beats, and are concerned mostly with the style and production. All of the serious later movie Draculas draw from Lugosi's performance, not from the earlier work by Max Schreck, whose "Nosferatu” was more inhuman and distant, a skeletal wraith. Lugosi, with his deep eyes (made eerie by Freund with pinpoint lights) and his glossy black hair, created one of the most influential of all movie performances, making a distinctive impression that influenced movie Draculas for years to come--especially Hammer Films star Christopher Lee, who played the character at least seven times.

If the film's look and star performance were influential, so was its dialogue. Many of movie's great lines have entered into folklore:

For one who has not lived even a single lifetime, you are a wise man, Van Helsing.

Listen to them. Children of the night. What music they make.

The story is familiar to every moviegoer. Renfield (Dwight Frye), an English real estate agent, visits Transylvania to sell a London property to the count. He really wants to make that sale; he takes no warning from the fear of the villagers when Dracula's name is mentioned. He survives a terrifying ride in a coach with no driver. And then he plunges into his doom. The establishing shots of the fearsome interiors of Castle Dracula owe everything to the tradition of German Expressionism. There is the sinister politeness with which Dracula greets his guest and offers him food and ... wine. Then the overpowering of Renfield. The return to England on the ship with its deadly cargo of coffins (another sequence that owes much to "Nosferatu”). The ghost ship that drifts into port, everyone on board apparently dead except for Renfield, who is stark staring mad.

In London the vampire feasts on the blood of strangers encountered in the night, in scenes owing something to the legend of Jack the Ripper. Then he introduces himself into high society by insinuating himself into the box at the opera occupied by Dr. Seward (Herbert Bunston). The doctor owns Carfax Abbey, which is next door to the sanitarium where the unfortunate Renfield has been imprisoned (giggling and eating spiders for their blood). He meets Seward's daughter Mina (Helen Chandler), her fiance John Harker (David Manners) and her friend Lucy (Frances Dade). They are joined eventually by the vampire hunter Dr. Van Helsing (Edward Van Sloan), who explains vampirism in more detail than the drama probably requires.

The scenes in Carfax Abbey are an anticlimax after the Expressionist terrors of the scenes set in Transylvania and aboard the ship. They're based on the same Broadway play in which Lugosi first played Dracula, and owe more to the tradition of drawing-room drama (and, it must be said, comedy) than to the underlying appeal of vampirism. Yet even here Browning is able to add unsettling touches, as in the way he suggests Dracula's presence in the visits of bats and in the drifting of fog.

of the horror genre, and yet most of his best work is overshadowed by his

collaborators. Lon Chaney, "the man of 1,000 faces,” seems to be the key creative force behind Browning's silent landmarks "The Unholy Three” and "West of Zanzibar.” Lugosi, Freund and the subject matter are the creative engines behind "Dracula.” One Browning picture that stands alone as his personal vision is "Freaks” (1932), set in a circus sideshow, and so shocking it has been banned here and there ever since.

"Dracula” had no musical score when it was first released, apart from some fugitive strains of "Swan Lake.” That left an opportunity. I saw a restored version of the film in September at the Telluride Film Festival, with Philip Glass joining the Kronos Quartet in performing his newly composed score. That is the version now available on tapes and discs.

Purists argue that Browning's original decision was the best one--to enhance the horror by eerie sound effects instead of underlining it with music. But "Dracula” has been pushed and pulled in so many different directions by so many different artists that Glass is only following the tradition in adding his own contribution. The Glass score is effective in the way it suggests not just moody creepiness, but the urgency and need behind Dracula's vampirism. It evokes a blood thirst that is 500 years old.

Is the 1931 "Dracula” still a terrifying film, or has it become a period piece? The "most chilling, genuinely frightening film ever made,” vows the reference series Cinebooks. Perhaps that was true in 1931, but today I think the movie is interesting mostly for technical reasons--for the stylized performances, the photography, the sets. There is a moment, though, when Lugosi draws close to the sleeping Lucy, and all of the elements of the material draw together. We consider the dreadful trade-off: immortality, but as a vampire. From our point of view, Dracula is committing an unspeakable crime. From his, offering an unspeakable gift. 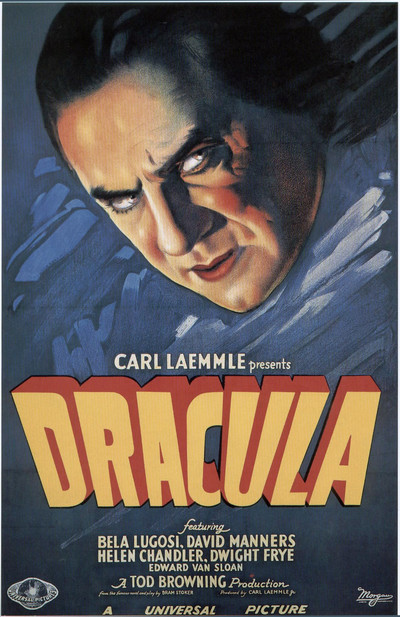