Although it is not yet as prominent as the saga-length classic rock biopic subgenre of documentary, the behind-the-scenes-celeb celebratory life story is becoming a thing. Pictures like “The Kid Stays in the Picture” and “His Way,” about Robert Evans and Jerry Weintraub, respectively, had a certain valedictory air to them. The more recent “Supermensch: The Legend of Shep Gordon,” about the manager and unofficial showbiz rebbe to dozens if not hundreds, had more of a “well why not?” impetus behind it.

The initial rags-to-riches story limned in the opening minutes of “Good Fortune,” intoned by narrator Dan Aykroyd in tones suggesting he really wants you to buy THIS Bass-O-Matic, suggest something similar in the works. But no. Soon Aykroyd is condemning the pursuit of profit at all costs, and talking about American success stories that pursue a “Triple P” bottom line: Profit, People, Planet. This is all by way of introducing John Paul DeJoria, who often goes by J.P. The lanky, pony tailed figure is familiar: back in the day, he was the TV ad and magazine ad face of Paul Mitchell hair products, to such an extent that many people came to think he was Paul Mitchell himself. He’s not, and that’s a big part of his story, one I won’t entirely divulge here. In any event, J.P. is seen entering a company called Chrysalis, one of the many philanthropic concerns he’s founded, cofounded, or has a profound interest in. Once inside, he gives a talk to a seminar about the first time he was homeless.

“Success unshared is failure.” That’s one of DeJoria’s mottos, one he says he learned from his mom, who once gave a dime to a Salvation Army bell ringer in spite of being practically broke. The terrifically engaging and likable DeJoria tells his own story of a late 1940s childhood in L.A.’s Echo Park. His buddy Danny Trejo discusses DeJoria’s Greek heritage and laughs that it took a long time for DeJoria to understand he wasn’t Hispanic. Another childhood pal, singer and actress Michelle Phillips, remembers how she and J.P. were once singled out by a grade-school teacher who said “These two will never amount to anything.”

J.P. grew up in a circumstance in which military service offered opportunities to learn not just discipline but specific skills, and his time in the Navy is recalled as productive and instructive. It also instilled him with a love of the sea, which he applied, once he became a multi-millionaire, to aggressive conservation and anti-poaching charities. Out of the Navy, he discovered he had great salesmanship skills. He applied them vigorously, to the extent that he got fired from several sales jobs for being too good. (This sounds improbable, I know, but as told by J.P. it makes complete sense.) A meeting with the influential stylist Paul Mitchell led to a go-for-broke attempt to conceive and market a viable line of hair-care products. It succeeded beyond each of their wildest dreams.

At this point in the film, Aykroyd and directors Joshua Tickell and Rebecca Harrell Tickell take on the excesses of 1980s success with a montage and some clever lines. “In the 1980s, hair was big,” one interviewee dryly notes. But DeJoria and Mitchell, instead of pumping their money into exotic, excessive or destructive lifestyles, concentrated on making their company green and researching sustainable habitats. Heartbreak was the main setback of Paul Mitchell’s death in 1986, of pancreatic cancer; Mitchell’s son and several others recount how DeJoria pulled both company and family together with a renewed dedication to doing good work.

The movie goes on to tell of how DeJoria founded Patron tequila, and how that brand took off. It details the incredibly humane conditions under which that spirit is manufactured, and how employees and even visitors at Paul Mitchell’s offices get a free lunch. Most of all it shows how DeJoria’s passion for doing good extends into a head-spinning variety of walks of life. He’s a guy who can chat with equal ease and sincerity with cops and outlaw bikers; a guy who will still make personal sales calls to hair salons to push Mitchell’s products. And of course he knows and is admired by everyone, as the steady stream of famous talking heads make clear.

Watching the Shep Gordon picture, I thought, “yeah, I guess he’s a pretty great guy if you’re already in his circle.” Whereas DeJoria seems like the type of person who’d give his time and a bit of his kindness to any stranger who didn’t present himself as an utter jerk. He’s a pleasure to spend time with, which is one reason this movie goes down so easy. Hell, I’d love to have him as a boss, although I doubt he’s in the market to hire a movie critic. 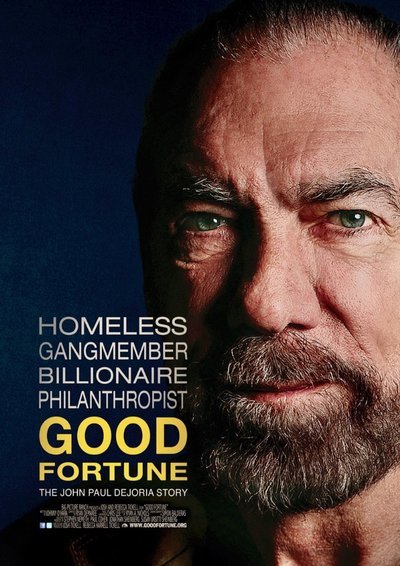 Rated PG for thematic elements, some language and smoking.