Supermensch: The Legend of Shep Gordon

"I’ve met more famous people through Shep Gordon than through anyone else I’ve ever met in my life," says one of the famous talking heads populating "Supermensch," the directorial debut of Mike Myers that celebrates a showbiz manager of unusual achievement, one does have to admit.

Gordon, seemingly as likable a prolific wheeler-dealer as you’re ever likely to encounter, rose from abject stoned hippiedom to starmaker at the end of the Age of Aquarius. Chance meetings with Hendrix and Joplin led to an introduction to rock rotters Alice Cooper (the group) and a verbal contract between Gordon and that band’s eponymous singer. A kind of innate showbiz acumen leads Gordon to great innovations on his client’s behalf (he was the guy who planted the live chicken on stage at the infamous Alice Cooper gig that got the artist tagged as a poultry slayer), and by the 40-minute mark of the movie he’s working the same magic for Anne Murray and Teddy Pendergrass. Director Myers is pretty deft at getting his aforementioned talking heads, which range from Stallone to Legase to the personal attaché to the Dalai Lama, to make sense of Gordon’s eclecticism.

The movie is like sitting at a restaurant with a guy who’s got some of the best stories you’ve heard in your life—provided, that is, that you’re into stories about showbiz. Gordon, it can never be said enough, has met and/or done business with anyone who was ever anyone, and in some peculiar ways—he and Cary Grant had a joint custody arrangement concerning a housecat. Gordon’s genius at showmanship—among other things, he pioneered the "For Ladies Only" concerts that shot R&B love man Pendergrass’ career into the stratosphere—is, per this portrait, matched only by his menschiness. Gordon, who has a distinct speaking style and infectious laugh, speaks of his philosophy of "compassionate business" as he recounts, with confidence but some modesty, how he put the business affairs of Groucho Marx in order. The recounting of some literally astonishing acts of generosity makes you like the guy quite a bit, in spite of his having sported a  "No Head, No Backstage Pass" t-shirt for a good portion of his drug-fueled ‘70s heyday. (And while his taste in music was all over the map, his accomplishments as a movie co-producer were refreshingly daring; he had a hand in bringing such pictures as "Koyaanisqatsi" and "Kiss of the Spider Woman" into theaters.)

It’s the generosity, we suspect, that moved Myers, who first met Gordon through "Wayne’s World," in which Alice Cooper appeared, to craft this loving portrait. He punctuates his talking head segments with animation sequences, flashes of punchline imagery, and the occasional cheeky caption, such as the description of CBC staple Gordon Pinsent as "Famous Canadian." It’s pretty entertaining and at times almost educational—Gordon’s account of how, and why, he created the category of celebrity chef is a short course in modern-day branding, for better or worse. The movie’s nutritional value, documentary wise, is pretty dubious in other respects, though; youngsters watching this are likely to come away with the impression that Alice Cooper was always a solo act rather than the front man of a band, none of the other members of which make an appearance here. 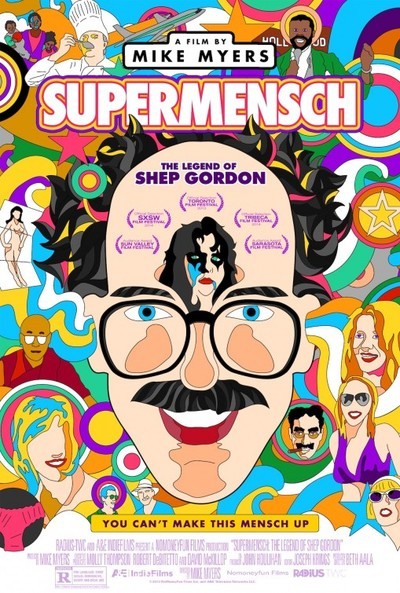 Supermensch: The Legend of Shep Gordon (2014)

Rated R for language, some sexual references, nudity and drug use