“Wake the neighbors, get the word out
Come on crank up the music, climb a mountain and shout
This is life we’ve been given, made to be lived out
So la la la la live out loud”

It’s rather amazing, and yet somehow appropriate, that so much religious music written to convey one’s spiritual awakening could easily double, “Sister Act”-style, as a coming out song. I’ve always envisioned the aforementioned lyrics from Christian singer/songwriter Steven Curtis Chapman’s hit tune, “Live Out Loud,” as an ideal anthem for any Pride parade, and the same could be said of “Amazing Grace,” with its refrain of “I once was lost, but now am found.”

The latter is quoted early on in David Charles Rodrigues’ documentary, “Gay Chorus Deep South,” by its central subject, Tim Seelig, who came out as gay after 35 years of living what he found to be a lie. Upon being open about his orientation, Seelig was forced by the Southern Baptist church where he worked and worshipped to permanently leave the premises while bidding his wife and children adieu, thus understandably sealing his hatred of organized religion. Yet his love of gospel music and its communal power led him to continue embracing the art form as Artistic Director of the San Francisco Gay Men’s Chorus (SFGMC), and after enduring the hateful vitriol empowered by Trump during the 2016 election, he decided to take his group on tour.

Such is the premise for Rodrigues’ film, which splits its title into two separate cards, as if to acknowledge the sheer incongruity of “Gay Chorus” and “Deep South.” As detailed during the film’s opening moments, 33 states in America have laws permitting the firing and eviction of LGBTQ+ individuals on the basis of their orientation, with many of the most discriminatory bills enforced in the South, namely HB1523 in Mississippi and HB2 in North Carolina. Perhaps taking a cue from black pianist Dr. Donald Shirley’s choice to perform for racist audiences, which should’ve been the primary focus of last year’s problematic Best Picture winner “Green Book,” Seelig takes the SFGMC to venues in both of the notorious states, along with South Carolina, Tennessee and Alabama.

What initially promises to be a confrontational polemic on the order of Penny Lane’s satirical masterwork, “Hail Satan?”, gradually subverts our expectations by illustrating how one of its key songs, “You Can’t Judge a Book By Its Cover,” should be heeded by not only southern audiences but the singers themselves. When chorus member Jimmy White admits how painful it will be if his long-estranged father fails to show up to their concert in Jackson, Mississippi—which just so happens to be his parents’ hometown—Seelig stresses the importance of White telling his folks how important their presence will be, rather than assuming they already know. It is our assumptions, the film suggests, more than any particular prejudice that widens the chasm between our differing ideologies.

Making the effort simply to communicate with one another through the universal language of art can prove to be extraordinarily healing. Despite saying years ago that he wished his son had never been born, Jimmy’s dad does indeed attend the concert, and can’t resist joining the audience in laughing when a singer in drag pulls an enormous pitchfork out of her bodice. After all, funny is funny. This encounter is the first of many in the film that goes in an unexpectedly optimistic direction.

Seelig appears almost disappointed when his interview on a right-wing radio network in Knoxville ends with the host, wearing a Make Radio Great Again hat, praising his group for their message of unity, before claiming off-air that southerners hostile to the gay rights movement are in the extreme minority. An Alabama family invites two chorus members to dine with them in their home, while insisting that they “love everybody’s soul” and want to take as many people to Heaven with them as possible (where exactly they received their guaranteed tickets in advance is another story). Less welcoming is Queer historian John Burford, who admits to Seelig that the very notion of a goodwill tour embarked upon by the SFGMC feels “white paternalist and condescending” to gay southerners who otherwise feel ignored. Seelig does not argue with him, apart from clarifying that this wasn’t his intention, and that it is “those in the middle” whom the choir is aiming to reach with their artistry.

Produced by Jesse Moss, whose enraging Netflix docu-series, “The Family,” provided ample evidence for why the godlessly corrupt National Prayer Breakfast should be abolished, “Gay Chorus Deep South” challenges us to accept its hopeful message at a time where our paranoia and cynicism is defensibly at an all-time high. Just when I was about to dismiss the alleged kindness of various well-wishers as the veneer of southern hospitality, Seelig does precisely that during the film’s best and testiest scene, as he meets with pastor William Pender about the possibility of performing at his Baptist church in Tennessee. Though the idea of exclusion makes Pender uncomfortable, he also fears the pushback he’ll receive if the choir’s performance “smells of demonstration.” This causes Seelig to affirm that he and his group are not looking to be merely tolerated, but to have their uniqueness celebrated, to which Pender replies that he hasn’t “felt the nudge” to do that.

As expected, the majority of naysayers in the film refuse to have their faces shown on camera, from the anonymous caller spewing bile to the homophobic senior minister in Knoxville newly appointed by the Bishop to steer his church away from progressive views. Only outside Selma’s historic Brown Chapel A.M.E. Church do young black locals voice their frustration to the camera, refusing to accept that the battle for civil rights waged by LGBTQ+ citizens is the same as the one fought by their ancestors over 50 years ago. Especially saddening is the confession of a protestor who shut out her own fantasies about women after her religion deemed them an abomination. Though Rodrigues never digs too deeply into how choir members have reconciled their sexuality with their faith, the film channels this internal struggle in its most powerful number, a piercing rendition of “Lawd, How Come Me Heah?” It’s sung by Valeria Scott of the Oakland Interfaith Gospel Choir, which represents multiple theologies under the leadership of Terrance Kelly, and volunteers to join the SFGMC on their unabashed love fest.

Stephen Cone, a writer/director whose own coming out story and Southern Baptist upbringing led him to helm one of the decade’s best films, “The Wise Kids,” once told me that it is the community found in religion that continues to appeal to him. Rodrigues’ movie pays tribute to this transcendent sense of unity in scene after heartrending scene, while deliberately failing to utter the name of the president or repeat any of his profane rhetoric. Instead, we observe ostracized teen Riley McLeod finding acceptance at a concert where the choir serenades the audience with “You Have More Friends Than You Know.” We see pastor Rob Lowry fighting back tears after a judgmental 83-year-old parishioner undergoes a change of heart, courtesy of the SFGMC’s visit to her church. We bask in the radiance of drag queen Ashlé Blow, whose gender transition brings newfound meaning to her lip-synced performance of Jennifer Holliday’s “I’m Changing.” And though there are no tearful familial reunions reserved for Seelig, we share in his elation when he does find a Baptist church that considers him and his choir worthy of celebration.

The overwhelming positivity in this footage is illuminating and encouraging, yet also more than a touch puzzling, raising questions of precisely where this intolerance hibernates when cameras aren’t around to support such devastating legislation. Let us pray that the optimism on display here, signaling an overarching move towards civil unity across the United States, is more than just a cinematic mirage. 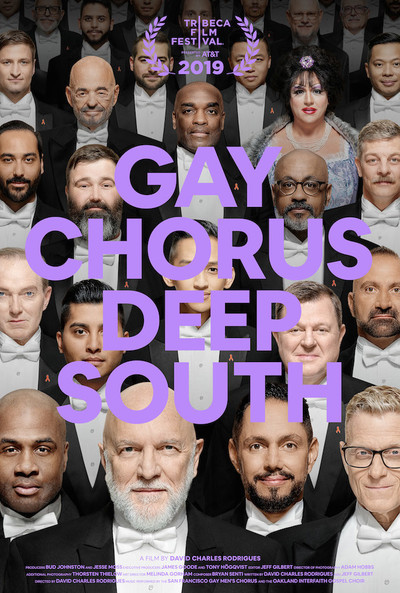