"Finding Nemo" has all of the usual pleasures of the Pixar animation style--the comedy and wackiness of "Toy Story" or "Monsters Inc." or "A Bug's Life." And it adds an unexpected beauty, a use of color and form that makes it one of those rare movies where I wanted to sit in the front row and let the images wash out to the edges of my field of vision. The movie takes place almost entirely under the sea, in the world of colorful tropical fish--the flora and fauna of a shallow warm-water shelf not far from Australia. The use of color, form and movement make the film a delight even apart from its story.

There is a story, though, one of those Pixar inventions that involves kids on the action level while adults are amused because of the satire and human (or fishy) comedy. The movie involves the adventures of little Nemo, a clown fish born with an undersized fin and an oversized curiosity. His father, Marlin, worries obsessively over him, because Nemo is all he has left: Nemo's mother and all of her other eggs were lost to barracudas. When Nemo goes off on his first day of school, Marlin warns him to stay with the class and avoid the dangers of the drop-off to deep water, but Nemo forgets, and ends up as a captive in the salt-water aquarium of a dentist in Sydney. Marlin swims off bravely to find his missing boy, aided by Dory, a blue tang with enormous eyes who he meets along the way.

These characters are voiced by actors whose own personal mannerisms are well known to us; I recognized most of the voices, but even the unidentified ones carried buried associations from movie roles, and so somehow the fish take on qualities of human personalities. Marlin, for example, is played by Albert Brooks as an overprotective, neurotic worrywart, and Dory is Ellen DeGeneres as helpful, cheerful and scatterbrained (she has a problem with short-term memory). The Pixar computer animators, led by writer-director Andrew Stanton, create an undersea world that is just a shade murky, as it should be; we can't see as far or as sharply in sea water, and so threats materialize more quickly, and everything has a softness of focus. There is something dreamlike about the visuals of "Finding Nemo," something that evokes the reverie of scuba-diving.

The picture's great inspiration is to leave the sea by transporting Nemo to that big tank in the dentist's office. In it we meet other captives, including the Moorish Idol fish Gill (voice by Willem Dafoe), who are planning an escape. Now it might seem to us that there is no possible way a fish can escape from an aquarium in an office and get out of the window and across the highway and into the sea, but there is no accounting for the ingenuity of these creatures, especially since they have help from a conspirator on the outside--a pelican with the voice of Geoffrey Rush.

It may occur to you that many pelicans make a living by eating fish, not rescuing them, but some of the characters in this movie have evolved admirably into vegetarians. As Marlin and Dory conduct their odyssey, for example, they encounter three carnivores who have formed a chapter of Fish-Eaters Anonymous, and chant slogans to remind them that they abstain from fin-based meals.

The first scenes in "Finding Nemo" are a little unsettling, as we realize the movie is going to be about fish, not people (or people-based characters like toys and monsters). But of course animation has long since learned to enlist all other species in the human race, and to care about fish quickly becomes as easy as caring about mice or ducks or Bambi.

When I review a movie like "Finding Nemo," I am aware that most members of its primary audience do not read reviews. Their parents do, and to them and adults who do not have children as an excuse, I can say that "Finding Nemo" is a pleasure for grown-ups. There are jokes we get that the kids don't, and the complexity of Albert Brooks' neuroses, and that enormous canvas filled with creatures that have some of the same hypnotic beauty as--well, fish in an aquarium. They may appreciate another novelty: This time the dad is the hero of the story, although in most animation it is almost always the mother. 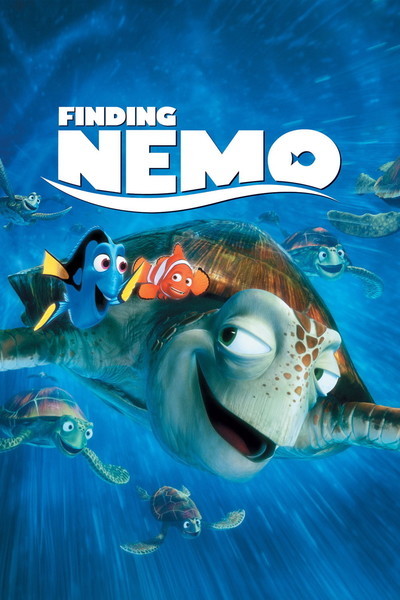