The problem with the "Fifty Shades" franchise—if it can be called a franchise—is not so much its portrait of a controlling man manipulating his lover past her comfort zone, although earlier installments feature such scenes. The problem is there's not enough sex and too much ... everything else. Kidnappings. Office drama. There's a gun in a drawer. People are stalked. A helicopter crashes in the mountains. High-speed car chases! When compared to, say, some of the films of Catherine Breillat, the "Fifty Shades" movies come off as coy '60s films about marriage, commitment, and—adorably—male ineptitude in the kitchen. ("Fifty Shades Freed," the latest film, shows Christian Grey trying to make dinner for his new wife and burning the tomato sauce, as she looks on affectionately.) There's a conservative streak in E.L. James' books, an acceptance of all of the "symbols" making up the heterosexual status quo: diamond rings, marriage, house-hunting. What would the stories be like if they did question the status quo? What would it be like if Anna Steele was not interested in the domesticated trappings of state-approved monogamy, but chasing pure experience because it's fun and exciting? Now that would be truly radical.

At the end of "Fifty Shades Darker," also directed by James Foley, the emotionally damaged Christian Grey (Jamie Dornan), whose penthouse includes 1.) a sex-dungeon room with red leather walls and 2.) a pommel horse, proposed marriage to his virgin-turned-submissive-sex-partner Anastasia Steele (Dakota Johnson). "Fifty Shades Freed" starts with the wedding. At first all is bliss, with a couple of kinks—sexually (what's a honeymoon without handcuffs?) and emotionally (he doesn't want her going topless on the beach). They are called back from their honeymoon because a bomb exploded in one of the "Grey Enterprises" warehouses. Security footage reveals the terrorist as Hyde (Eric Johnson), Anna's former boss who sexually assaulted her at the first available opportunity. The lengths Hyde will go to to get revenge makes up just one of the many non-sexual plot-lines of "Fifty Shades Freed."

Another aspect of the film is Anna's desire to have a life outside of her marriage. She keeps working at the small publishing house where she was promoted to Fiction Editor while she was on her honeymoon, because that's realistic. In an inadvertently entertaining moment, Anna instructs her team on a book's font size. The film is crowded with events, held together by pop songs: Anna asserts her primacy with a hottie real estate agent making the moves on Christian, Anna's friend gets engaged, there's a spontaneous trip to Aspen, Hyde's on the loose, Anna's in danger, Christian gets wasted. The emotional tension of "Fifty Shades of Grey" and "Fifty Shades Darker," where Anna has hesitations about submitting to his sexual tastes, is gone. Anna loves the sex they have. She feels safe with him. When he's too controlling, she tells him so. They're actually ... a boring couple, truth be told.

These movies are silly, and they're silliest when they get romantic, like the scene when Anna discovers Christian, moody and sensitive, sitting at a grand piano, playing and singing Paul McCartney's "Maybe I'm Amazed." In that moment, Anna sees him as the little boy tormented by his childhood "in the system." We, however, just see a dumb scene. There are many such moments.

A lot of the cultural commentary on "Fifty Shades" has been worried concern—or outright contempt—about its portrayal of a controlling abusive relationship, where a man gaslights a woman into sex she's not comfortable with. That's not quite what's going on, though. She is willing to walk away from the relationship (and does so in former installments). When she comes back, she comes back on her terms. If everyone's consenting, then what's the problem? There's another aspect of "Fifty Shades" that deserves mention, relevant in particular to our current moment: because of the couple's chosen kink, verbal consent is built into the relationship, even after marriage. Consent is never assumed. She blurts out her safe word at one point, and he stops because those are the rules. She tells him what she didn't like. He apologizes. At one point, he stops what he's doing and asks her if it's all right. She says yes. A little bit later, he checks in with her again, and she gives him verbal consent to keep going. If you want to talk about the utopia of "enthusiastic consent," this is what it looks like.

Christian Grey is an impossible role for an actor. He is pure fantasy, but it's a particular kind of fantasy, emotionally complicated, with night terrors and abandonment issues. Some people are into the hotness of the fantasy of "healing" a damaged partner. It may be unhealthy in the "real world," but it's the stuff of the "Hurt/Comfort" subgenre of fanfic, which could fill every library in the world it's so popular. If that's your freak flag, let it fly. But Dornan never finds a "way in" to this frankly unrealistic bazillionaire-dom. He was so good as the serial killer in the television series "The Fall," but here—when he has to show Christian's playful side, or emotionally damaged side—he is extremely inhibited.

Dornan's inadequacy is accentuated by Dakota Johnson's natural force of personality and charisma. Throughout, she makes intelligent choices (no small feat, considering the material). She doesn't take any of it too seriously, and yet she takes it seriously enough that she doesn't seem like she's "slumming." A sexy scene involving ice cream works because Johnson turns it into a game she finds amusing. Her sense of humor never leaves her. "Fifty Shades" is pure relationship melodrama, and the role of Anna requires an honest commitment to those aspects of the story. A true test of an actor's talent is how they survive silly or bad material. Dakota Johnson survives. Thrives, even. It will be fun to see what she does next. 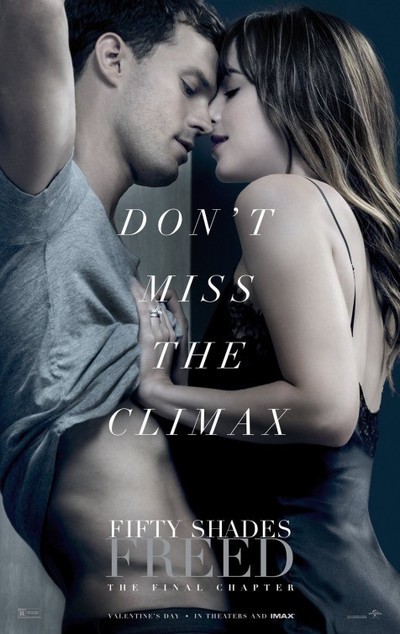