Who would have guessed that, when he was a boy, Christian Grey, the controlling, sexually sadistic bazillionaire at the center of E.L. James’ "Fifty Shades of Grey" juggernaut, was a "Chronicles of Riddick" fan? In a scene in "Fifty Shades Darker," the sequel to "Fifty Shades of Grey," Christian (Jamie Dornan) sits in his childhood bedroom and tentatively opens up to his girlfriend Anastasia (Dakota Johnson). Looming behind his head on the wall is a gigantic "Riddick" poster. Did the set decorator put the poster there to add texture? Backstory? Whatever the intent, having "Riddick" loom as the background image in a desperately serious, post-coital conversation was inadvertently hilarious. There's a lot of inadvertently hilarious stuff in "Fifty Shades Darker," directed by James Foley (and he'll be directing the final installment too, "Fifty Shades Freed”), with Johnson and Dornan back as star-crossed lovers Anastasia and Christian, respectively. These films take themselves extremely seriously, which makes them very easy targets.

“Fifty Shades Darker” starts with Christian waking up from a nightmare of the abuse he experienced as a child. This is the main thrust of the movie (puns are unavoidable): Christian’s unresolved trauma from his Dickensian past and whether or not Anastasia can help him heal. I don’t judge other people’s fantasies. But what works for E.L. James as fantasy fodder makes for tiresome viewing. Christian and Anastasia have subtext-free conversations, where Anastasia murmurs howlers such as, “So you pick women who look like your mother?” with a straight face. (Hats off, Ms. Johnson.)

Christian wants Anastasia back. He’s even willing to go “vanilla” if that’s her preference. It is, so they have vanilla sex, and everything is going great—with boat rides and masked balls and makeover montages—until … well, until all kinds of things, so many, many, MANY things—old lovers, a shady business deal, PTSD flashbacks, an attempted sexual assault, a helicopter careening out of control—intervene. (Screenwriter Niall Leonard had his work cut out for him adapting the book.) These two lovebirds cannot catch a break and “vanilla” cannot withstand such unbelievable pressure. Anastasia is drawn back into the web of Christian's desires. And she has fun with it, for the most part. Good for her.

The thing about Dakota Johnson—and it’s very important—is that she is unable to suppress her clear intelligence and, even rarer, sense of humor. It's so evident that it becomes a defining characteristic, as well as an important anchor for a film that desperately needs it. The dialogue is so silly and so repetitive that it could sink a far more seasoned actress. But she survives. There’s a goofiness about her, a charming awkwardness that feels organic; Foley was smart enough to realize how much Johnson's sense of humor helps the film. She was wonderful in Luca Guadagnino's “A Bigger Splash,” one of the best films of last year, playing a manipulative little sexpot who enjoys messing with the heads of the men in thrall to her. Up against some serious competition in “A Bigger Splash” (Ralph Fiennes, Matthias Schoenaerts, Tilda Swinton), she more than held her own. Here, she's at the center. Johnson doesn’t quite make Anastasia distinctive or unique, but she does come off onscreen as reactive, and impulsive. She is not afraid of the material and also not afraid to show how absurd she finds some of it, how absurd she finds him. This is no small feat. She's fun to watch.

Kim Basinger shows up as Elena Lincoln, the oft-mentioned “Mrs. Robinson” in “Fifty Shades of Grey,” the older woman who initiated Christian into all the joys of bondage play, at the very same moment she was committing statutory rape. Basinger shows up as a Cassandra-like figure, hell-bent on warning Anastasia off. Bella Heathcote plays Leila, Christian’s “sub” before Anastasia, who is now out of her mind, stalking Anastasia through the streets, wearing raggedy clothes that make her look like an extra in “Les Miserables.” Marcia Gay Harden returns as Christian’s mother, overwhelmed with joy that her bizarre adopted son is involved with someone so normal. It’s a weird mix. There’s so much going on that the sex scenes are incidental, rather than the whole damn point. And that’s the worst sin of all.

There have been so many “think pieces” about “Fifty Shades,” the books and the movie, because whenever millions of women go crazy about something en masse, it becomes a National Concern. What does it MEAN that women respond to this? Both men and women participate in the concern-trolling. Why is a woman submitting to a guy’s misogynist demands considered sexy? Well, maybe because this is a fantasy, and fantasies don’t make sense. You can have a fantasy about being abducted by pirates and have no desire in real life to be abducted by pirates. Both Anastasia and Christian consent to the sex they have. This is not to say that Christian is not a nightmare. He is, but not because he wants to tie her up and spank her. He’s a nightmare because he blows a gasket when she has to go on a business trip. There are so many real things to worry about in this world. What people get up to behind closed doors, if they’re both into it, is not one of them.

However, when sex is presented as this serious (as opposed to a normal thing that consenting adults choose to do with one another—and the kinks here aren't all that "out there" anyway), you want everyone to just admit the absurdity of it. Sex can be—and often is—hot AND absurd. The 2002 film "Secretary," also about a dom-sub relationship involving a Mr. Grey, portrayed fear, desire, humor, simultaneously. In other words, “Secretary” had its ball-gag and ate it too. But “Fifty Shades Darker” is less interested in exploring how the power plays of S&M have to be negotiated (a rich topic), and more interested in the conventional narrative of a damaged man terrified of intimacy and a loving woman waiting for him to transform into the wonderful boyfriend that she knows is inside of him. “Fifty Shades Darker” may wear leather and chains, but it’s still a retro bore. 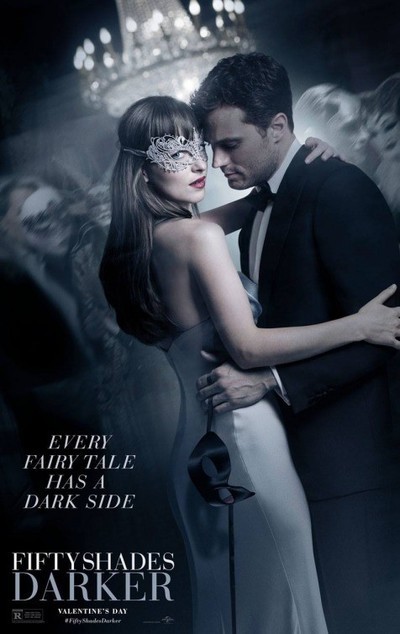