Leigh Janiak ends her "Fear Street" movies with a triumphant finale, and a sizable spoiler warning. Given the plotting of this trilogy, to talk about “Fear Street Part Three: 1666” in much detail feels like giving up a third act of a story. The biggest revelations are in the first hour, so I’ll tread lightly. But really, if you’re a fan of the movies, you should probably watch “1666” before reading any reviews—it’s good enough to see first before someone tells you all about it.

Janiak’s films have been their own emotional journey, one that started with a “Scream” riff in a shopping mall and now flings us back to 1666, inside the life of a woman named Sarah Fier, whose centuries-long curse is behind all of the horror. In this case, our main franchise hero Deena (Kiana Madeira) is seeing the period through Sarah’s eyes, but we in turn understand it through Deena’s experience. That means that everyone from her life and imagination is transposed into this otherwise quiet colonial version of Shadyside, including the supporting actors from “Fear Street Part One: 1994” and “Fear Street Part Two: 1978.” Many have rickety accents, and historical accuracy is a big con. This is definitely colonial life as imagined by a high schooler not fixated on detail. It’s not “The Witch,” it’s R.L. Stine.

Written by Janiak, Phil Graziadei and Kate Trefry, “1666” gets to the heart of the series by showing the curse that lead to all this chaos, which involves a tragic love story. In 1666, it was about Sarah and a woman named Hannah (portrayed here by Deena's girlfriend, Olivia Scott Welch's Sam). This third "Fear Street" uses Deena and Hannah's relationship from “1994” as a type of shorthand so that we understand the connection between Sarah and Hannah, and then fear for them when the rabid townsfolk think they have brought evil. The water supply is poisoned, fruit begins to mold, and unspeakable, effectively disturbing act is done by a pastor; according to the residents, it must be the work of the two women spotted being intimate in the woods the night before. “Fear Street Part Three: 1666” builds to a tense witch-hunt, a return to the boiling misogyny that lead to numerous women being hanged, especially when they made men fearful.

There is indeed a real witch in the mix, but with “Fear Street”’s ideas of challenging norms and shaking up a timeline’s narrative, it’s not like the real witch is the true force of evil. She's played by Jordana Spiro, who was previously seen as a babysitter in “1994,” and the camp nurse who tried to kill Tommy in “1978,” aware of what he was about to do. Here, she again has too brief of a point to make. But she helps move the story along, introducing the book with the Satanic spells that starts this whole mess when it get into the wrong hands. Sarah was hanged for it and created a curse before she died, but Deena learns more about what really happened, and how to beat the curse. Then WHAM! the “Fear Street” logo reappears, and it’s time for “Fear Street Part Two: 1994.” It feels great to be back, especially with what Deena realizes must be done.

More than the horror action itself, the series has really been driven by plotting that works to connect all of these different pieces, building a mythology with a few set of rules that play throughout (like how the monsters seek Deena’s blood, which the characters use here to clever advantage). It shows just how planned this franchise is, how meticulous; the intricacies come more from the history and the symmetry than the current timeline being presented, which has also made dangerously slow burns of all three movies and their first acts, "1666" in particular. But there’s a special thrill in how shots are recalled, locations are reused, and one generation of Shadysiders acts similarly to another. The effort is rewarding to the viewer, and highlights the franchise's larger idea about how time is truly a flat circle.

The reprise within “1666” reminds you of how much of a Herculean effort this is, churning out three movies in one year, without the overall story losing their momentum from the usual two-year waiting period for a horror sequel. Big gaps develop however, in what hasn’t been tended to: in my book, it’s the Shadyside/Sunnyvale idea that gets a little lost in the plotting and symbolism, especially with all of the attention put on the tension in the past two films. There’s a hint of more to come with a sequel (obvious, it's Netflix), and here’s hoping that the history is fleshed out even more. It’s worth noting too, that while the movie’s biggest twist is relatively juicy, it doesn’t thoroughly check out.

With all of its secrets out in the open, the last half of "1666" is not particularly scary but it's a blast. It douses everyone in the neon light of the shopping mall that kicked off the series, and brings back even more major players. It's got brutal monsters, funny one-liners, Super Soakers, and some spiky anti-authority sentiment. A couple extra twists are added for good measure, to all the more affirm the series’ ingenuity and love for R.L. Stine’s books. Executed with the confidence of a victory lap, the last hour of "1666" is a series highlight, especially as it captures the brand of out-and-out fun that has made Janiak a newly minted crowd-pleaser in horror. 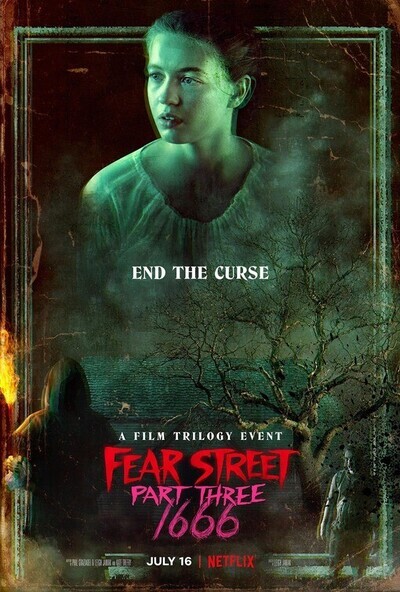