Last week’s “Fear Street Part One: 1994” introduced the horror of a centuries-spanning witch's curse, and balanced its terror and bloodshed with a hope in the storytelling tact itself. This sequel, unfortunately, is bleaker across the board. Leigh Janiak's “Fear Street Part Two: 1978” has more slasher thrills, but the fun of this series that makes it Halloween in July returns with an overly serious face, resembling something of a killjoy.

The terror in “Fear Street Part Two: 1978” concerns the towering, axe-swinging menace seen in “1994,” who provided some of that movie’s biggest jolts. Written by Janiak and Zak Olkewicz (and based on the Fear Street books by R.L. Stine), it takes the plotting back to the 1978 massacre at Camp Nightwing, which is meant to take after cinematic predecessors like Camp Crystal Lake (“Friday the 13th”), Camp Blackfoot (“The Burning”), Camp Arawak (“Sleepaway Camp”), among others. It’s a more gruesome backstory for the town of Shadyside, in this prequel about residents of Shadyside and neighboring Sunnyvale who are unaware that they’re in a gruesome sequel.

The deeper horror to these movies is about being stuck in an existence you can’t escape, in which everyone looks down at you, and which makes you hate yourself and others more—also known in “Fear Street” as being from Shadyside. “1978” foregrounds this self-loathing and focuses on characters with even more angst than those we saw in “1994,” as with Ziggy (Sadie Sink). She’s bullied by fellow campers and snotty young citizens of Sunnyvale, to the point that they call her a witch after hunting her down, beating her up, and burning her arm. It only fuels Ziggy’s anger at the world and herself, and Sink’s intense performance gets a great deal of volume out of this one note. Her harrowing intensity later brings in references to Stephen King’s “Carrie,” which are not inaccurate. But you wouldn’t want to follow Carrie around at summer camp, and this movie reminds you as to why.

Ziggy receives no help from her older sister and camp counselor Cindy (Emily Rudd) who is basically a traitor because she’s desperately trying to look like a Sunnyvaler. She doesn’t swear, is sexually tame with her boyfriend Tommy (McCabe Slye), and she wears a pricey white polo shirt as a symbol of this purity. Ziggy hates her for this fakeness, which makes their sisterhood estranged and even more tragic, and so does Cindy’s ex-friend Alice (Ryan Simpkins), another self-loathing Shadysider with the scars on her wrists to prove it. Alice has more fun than Cindy at camp, and popping pills and having sex with her boyfriend on campgrounds are an extension of her nihilism. The contention between Cindy and Alice only gets louder when they’re later stuck together underground, investigating a creepy witch maze, but the emotional beats are about them going for other’s heads. Even though the movie has an affection for these characters and their flaws, it uses them in a counter-productive way—have you ever been to a party where people yelling at each other stops the music and sours the whole vibe? “Fear Street Part Two: 1978” is like that, during the parts that otherwise try to stoke our intrigue.

Like “Fear Street Part One: 1994,” the script here tends to slog through more backstory related to Sarah Fier, the witch who soon enough possesses Cindy’s sweet boyfriend Tommy and turns him into a scowling, relentless, axe-wielding murderer. We know a good deal of this stuff from creepy cutaway moments in “1994,” and “1978” can’t reignite the sense of discovery in watching counselors learn about the cult-like scenario with their own eyes. “1978” feels held back by the information it needs to show about how to stop Sarah’s curse, to justify the bodies that piled up in the process.

The whole excitement of a summer camp horror movie only comes in glimmers; playing “Carry On My Wayward Son” by Kansas to accompany swooping shots of a sun-kissed campground (the needle drops are used with more restraint this time, and the period details aren’t self-sabotaging as in “1994”) only does so much. The big camp event this particular is a “Color War” (like capture the flag, and as seen in a banner in the high school in “1994”), but it's only seen in fragments, even with its “Wet Hot American Summer” potency. And there’s more about the Nick Goode character, who was a sheriff in “1994” but is seen here as a wholesome camp counselor (played by Ted Sutherland) on the verge of becoming more powerful thanks to his family name, while getting emotionally close to Ziggy. Their chemistry is knowingly awkward (she’s a camper, he’s a counselor after all) but their scenes are flat; Goode’s character continues to be one of the less interesting pieces in the saga as in "1994," even if we're bound to get more about his family’s roots in the Sunnyvale evil in the upcoming “Fear Street Part Three: 1666.”

But poor Cindy, poor Ziggy, and poor Alice. And yet a few other doomed counselors and campers get it even worse from “1978,” as they become the grounds for this movie to make a hard pivot into classic, but easy slasher thrills. If this film were a one-off, it’d be easier to write off or accept. But because “1978” takes place in a developing universe that comes with an intricate tone, their expendability stands out even more as cynical or uninspired. The mix of horror and straight-up fun is far less dynamic, and the original magic trick of getting you to care about every main young character in “1994,” only to make their death that more shocking, vanishes. Instead of enriching the experience of what makes a “Fear Street” movie different than your usual horror movie, Janiak aggressively course-corrects to the typical.

At least the hacking is top-notch. One of the most cohesive elements to the series remains its visceral sound design, and whenever an axe blade forces itself into someone’s face it’s incredibly rich; built up by slick editing and in-your-face cinematography, Tommy’s baseball swings and downward hack insta-kills make the abrupt violence unsettling on its own. It all pairs nicely with the excellent score too, this time by Marco Beltrami and Brandon Roberts, which elevates the intensity with a demonic chorus and frantic horn section.

Brutality and tragedy can make a point, especially in the second movie of a trilogy. “The night is darkest just before dawn,” as we’re told by “The Dark Knight,” echoing “The Empire Strikes Back,” or “The Matrix Reloaded,” etc. But there’s something overwhelmingly miserable about this sequel that makes its psychological point over and over, without the air of newness from its predecessor. Meanwhile, its most exciting developments are pushed to the bookends, like watching Gillian Jacobs tell this story in 1994 as the one frazzled survivor of the Camp Nightwing massacre, and the enticing cliffhanger for our franchise lead Deena (Kiana Madeira), who is trying to put an end to all of this. The rest of “1978” is more of a frustrating bummer—a summer camp slasher that’s afraid of campiness, and one that’d be a better fit for group therapy sessions than sleepovers.

Available on Netflix on July 9. 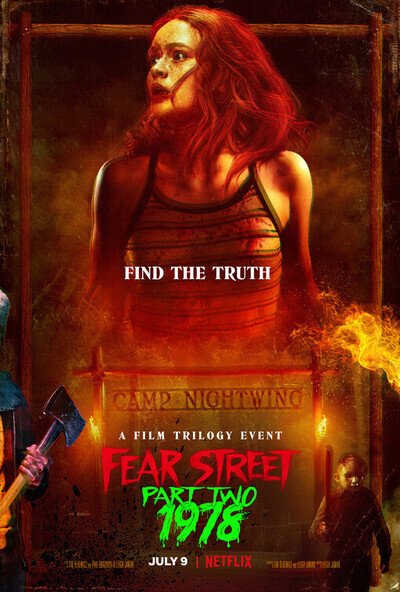 Writer (based upon the Fear Street books by)