Like so many other movies during this weird year, “Fatale” has been kicking around the calendar because of COVID-19 movie theater closures. It was originally supposed to come out in mid-June and has had a few other scheduled dates before finally arriving “only in theaters!” this Friday, if that’s the kind of calculated risk you’re prepared to take.

But director Deon Taylor’s film feels much, much older than that with its cheap thrills and archaic approach to women characters. They’re all crazy, or adulterous, or murderous, or all of the above. That retrograde attitude might at least be vaguely tolerable if “Fatale” leaned harder into its inherent cheesiness. And yet, this modern-day take on the “Fatal Attraction” premise never fulfills its promise as a lurid, guilty pleasure. Despite its slick aesthetics, with gorgeous stars in luxurious clothes driving flashy cars and enjoying multimillion-dollar views from the beachfront to the hilltop, “Fatale” is weirdly dull. It lacks the verbal punch of a pulpy film noir. Its pacing is too slack to serve as a gripping romantic thriller. It even rings hollow as a cautionary tale, because everyone is scheming and duplicitous and so no one has been truly wronged.

Its most grievous sin of all, however, is the miscasting of Hilary Swank. As the jilted woman who drives the film’s busy and bloody plot, Swank is strangely subdued. With her cool, steely presence opposite a shmoozy and ambitious Michael Ealy, her performance never quite jells. Swank delivers her threats with a degree of menace that’s so understated, it’s borderline monotone. Sure, she eventually gets the opportunity to let loose with the fearless physicality that’s the two-time Oscar-winner’s trademark. But it makes you wonder what she’s doing here, and what kind of direction she received once she arrived.

First, though, we meet Ealy’s Derrick, a handsome and successful Los Angeles sports agent and former college basketball star. The always formidable Mike Colter co-stars as his best friend and business partner, Rafe, who’s pressuring him to sell the company they’ve built to the behemoth William Morris Endeavor and reap millions. Derrick, however, wants to keep control of what they’ve worked so hard to achieve and continue their focus on providing the most lucrative deals for their lineup of African-American clients. That’s an interesting idea and would have made for a more inventive movie—in the vein of Steven Soderbergh’s “High Flying Bird,” perhaps—but screenwriter David Loughery doesn’t have anything nearly so substantial or complex on his mind.

Derrick is married to the beautiful but distant Traci (Damaris Lewis), a real estate agent who’s suspiciously out late showing expensive properties from Hancock Park to Marina Del Rey. (She and Derrick live way up in the Hollywood Hills off Mulholland Drive. That’s a lot of driving.) At a friend’s Las Vegas bachelor party, Rafe urges Derrick to have a little extramarital fun at a nightclub, even going so far as to pull the wedding ring off his buddy’s finger.

Enter Swank’s Valerie, from an entirely different movie, it seems. From the first moment Derrick and Valerie meet at the bar and he accidentally spills a drink on her slinky dress, there’s a directness about Swank’s delivery that conflicts with Ealy’s steamy demeanor. It’s as if she’s taking this all seriously as an acting exercise. Ealy, meanwhile, co-starred for Taylor last year in the gleefully bonkers stalker thriller “The Intruder,” so he’s familiar with this territory.

After a passionate one-night stand—or so Derrick thinks—his first clue that things may be amiss comes when he tries to leave Valerie’s hotel room in the morning and finds that she has locked his cell phone in the safe. Once he returns home to L.A. and treats his wife to a guilt-induced romantic evening, a violent home invasion interrupts their intimacy. And guess who shows up as the lead investigator on the case? It’s Valerie—better known as LAPD Det. Valerie Quinlan.

What are the odds???

You know the story from here. Valerie never boils Derrick’s bunny, but she does find flimsy reasons to show up at his minimalist mansion and his high-rise office. Theoretically, it’s all part of the investigation, but she’s also trying to make him squirm. And as we see in a few brief scenes with her ex-husband (Danny Pino), with whom she’s embroiled in an ugly custody battle over their young daughter, this is a pattern of behavior with her. “Fatale” is the kind of movie that depicts Valerie’s previous alcoholism and the mistakes she made while drunk not as a trait that reveals her humanity or vulnerability, but rather as a lazy shorthand. It suggests she’s weak, unstable, and undesirable, and explains away why she might be driven to such madness that she’d kill repeatedly if necessary.

As her body count rises, so do questions like: How do her neighbors in her downtown loft building not hear those noisy shotgun blasts? What did she do with the victims? And how does she drive back and forth across town so fast in pre-pandemic traffic? These are the places the mind wanders while watching “Fatale,” which makes the fatal mistake of being boring. 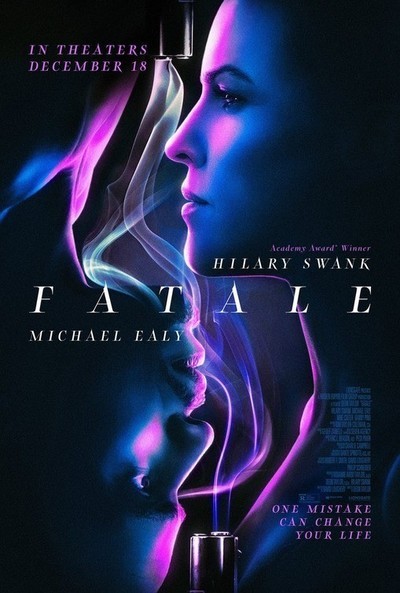