“Cliff here is meant to help carry the load.”—Rick Dalton (Leonardo DiCaprio) in Quentin Tarantino’s “Once Upon a Time…in Hollywood”

Had Dalton, as portrayed by one of Hollywood’s most outspoken champions of environmental preservation, served as the narrator of Louie Schwartzberg’s documentary, “Fantastic Fungi,” that is precisely how he would’ve described its titular subject. Just as the survival of DiCaprio’s aging actor is ensured by the efforts of his ever-present stunt double, Cliff Booth (Brad Pitt), the fate of mankind depends entirely on the ability of fungi to carry our collective load through decomposing matter, redistributing nutrients and evening out carbon in our atmosphere.

Though its generic title may evoke memories of the archaic science videos you fell asleep to in grade school, Schwartzberg’s film quickly proves to be one of the year’s most mind-blowing, soul-cleansing and yes, immensely entertaining triumphs. With the Amazon rainforest on fire and no discernible endgame for our dependency on fossil fuels, this picture provides a beacon of hope that feels neither hollow nor forced. Its illustration of fungi’s resilience is dazzling on both a visual and intellectual level, while affirming with matter-of-fact clarity that we, as a species, must evolve with nature in order to prevent our own extinction.

In a celestial voice suggesting Captain Marvel minus the sarcasm, narrator Brie Larson articulates the perspective of mushrooms—defined as the fruiting bodies of fungi—yet it is the documentary’s most engaging human subject, mycologist Paul Stamets, who channels their very essence. I must disclose that Stamets’ brother, Bill, is a longtime colleague and RogerEbert.com contributor who shares his sibling’s inquisitive nature. He’ll often lean toward me at the end of a screening and make an observation so out of left field that it might as well have flown in from a separate ballpark. It is this innate gift of viewing the world from a wholly original and analytical angle that can lead to visionary and transformative change, as illustrated by such trailblazing figures as Temple Grandin and Greta Thunberg, whose placement on the autism spectrum has been dubbed their superpower.

Having endured a conservative upbringing that resulted in his copy of Charles T. Tart’s Altered States of Consciousness being burned by a friend’s disgruntled father, Stamets was galvanized into researching the epiphanies brought about by fungi. In an exhilarating sequence, he describes how his initial experimentation with magic mushrooms cured his stuttering, allowing him to look a woman he desired in the eye and hold a conversation with her, rather than avert his gaze. He went on to found Fungi Perfecti, a family-owned company specializing in mushroom products where its workers, as claimed by Stamets, are so unified on the same wavelength, they communicate primarily through gestures.

On the heels of illuminating the painterly designs of nature in his series, “Moving Art,” director/cinematographer Schwartzberg removes the stigma so often associated with the word “fungus” by filming it in a way that emphasizes its majesty without leaving the realm of reality. Even the time lapse footage of a dead rat decomposing isn’t as repellant as one would expect, since it illustrates the cyclical transference of matter without lingering on any gore. Insects that we would normally stamp out at first glance become marvels of ingenuity under Schwartzberg’s lens, conjuring empathy for the world teeming with microscopic life lying just beneath our feet. It’s also no coincidence that the mushrooms exude an oddly erotic glow while growing before our eyes, since they are defined as the fungi’s organ of sexual reproduction that spews countless numbers of spores in what one young scientist refers to as a “spore-gasm.”

The film’s sprawling array of experts detail how penicillin molds have played a crucial role in everything from creating some of the world’s finest cheeses—such as gorgonzola—to saving thousands of American soldiers’ lives during WWII. Psilocybin mushrooms, the same ones that relieved Stamets of his stutter, caused lab rats to overcome fear-conditioned responses by opening new neurological pathways in their brain. According to the “stoned ape theory” supported by Stamets, this sort of hallucinogenic plant may have functioned as the monolith does in “2001: A Space Odyssey,” altering the minds of early man in a way that caused them to develop speech, build tools and ultimately become civilized beings.

The tagline to Kubrick’s aforementioned sci-fi opus—“The Ultimate Trip”—would’ve been a superior title for “Fantastic Fungi,” in part because its replications of psychedelic visions expressing the infinite space of existence are awe-inspiring even when viewed on a small screen. Yet the film is also a trip because its wealth of information contained within a running time barely exceeding 75 minutes minus credits can prove dizzying at times. Mark Monroe, whose past writing credits include the Oscar-winning documentaries “The Cove” and “Icarus,” does an impressive job of compiling the multitudinous strands of facts and theories in a way that is coherent and compulsively watchable, yet it’s worth wondering how some of these concepts would stand under scrutiny had the film been expanded into a miniseries.

What is inarguable are the motivations of those in power when attempting to censor the medical and spiritual breakthroughs produced by fungi. The ability of lion’s mane mushrooms to stimulate nerve regrowth could potentially lead to a treatment for Alzheimer’s if proper studies were conducted. Diagnosed with Stage 4 breast cancer, Stamets’ mother made a full recovery after taking turkey tail mushroom capsules. We also meet patients diagnosed with terminal illnesses who were aided by psilocybin, a far less costly option to Prozac, in finding peace, including a woman who recalls hearing the voice of God affirming her value and purpose. These divine encounters are as valid as any had in church, yet are freed from the predatory pyramid schemes of organized religion. Among the film’s most euphoric images is that of towering mushrooms projected on the Vatican in celebration of Pope Francis’ decision to support the Paris Agreement, a crucial example of how science and faith can indeed be in sync.

Throughout history, indigenous cultures have demonstrated that the closer one is to understanding nature, the more adept that person is in tapping into a universal consciousness, a oneness that binds all living things together not unlike the Force. Mycelium, the fungi’s vegetative web of threadlike cells, serves as nature’s social network, enabling plants to recognize their own kin, while moving carbon between them to store. Amazed by this invisible web of communication, I couldn’t help recalling Jim Henson’s childhood memory of studying the leaves and branches of an enormous tree as he lay in the grass. “I remember feeling very much a part of everything and everyone,” he wrote. What Schwartzberg has achieved here is akin to the humanizing blend of plant and animal life in Henson’s 1982 classic, “The Dark Crystal,” and its masterful Netflix prequel series, “Age of Resistance.” Not only has the world rarely seemed more richly alive than it does here, it has never appeared more equipped at providing solutions to our modern crises, if only we bothered to listen. 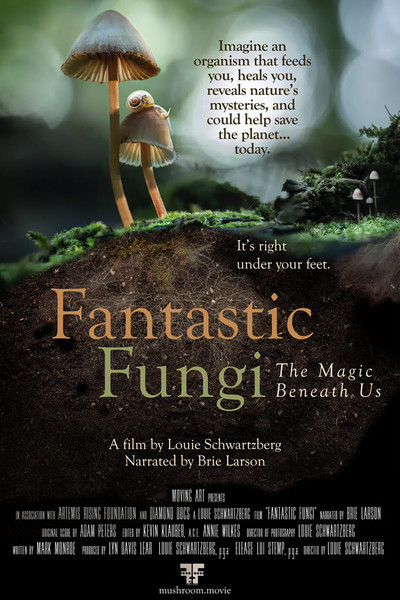 Paul Stamets as Himself

Roland Griffiths as Himself

Andrew Weil as Himself