Picked up at Sundance for a lot of money by Netflix, “Icarus” is a crackling documentary, the kind of piece that gets subscribers talking, and that’s exactly what the company needs. In theaters, a film like this might not get a lot of attention, playing only in limited markets. Say what you will about the dangers of Netflix curating the entire home entertainment industry, there’s something valuable in getting a unique documentary like "Icarus" to a wider audience. It’s an imperfect film—the first half-hour should have been cut by at least half to really get to the meat of the story—but the pacing of the final 3/4s of “Icarus” is remarkable, as we watch a man’s life and safety circle the drain. It’s a movie that only begins as a commentary on doping in sports and becomes something greater about the dangers of being a whistleblower, especially when the whistle blows on Russia.

“Icarus” starts as a first-person investigation of doping in sports—a sort of “Super Dope Me” if you will—in which director Bryan Fogel, an amateur cyclist, tries to game the system in the same way that Lance Armstrong did for years. Fogel begins a drug routine, injecting PEDs, testosterone, and who knows what else into his thighs and ass. The first half-hour of “Icarus” centers on Fogel trying to increase his stamina and cycling ability through drugs, and trying to pass tests designed to stop such things at the same time. To guide him, Fogel is put in touch with Dr. Grigory Rodchenkov, the head of the Russian anti-doping program and an important figure in athletics in that country. Rodchenkov is a documentarian’s dream, the kind of larger-than-life character that typically exists only in Hollywood. He regularly quotes George Orwell, forms a playful friendship with Fogel, and even comes to visit.

And then “Icarus” takes a turn that you may have read about in the papers. It turns out that Russia, under Rodchenkov’s watch, wasn’t so much anti-doping as anti-getting-caught-doping. Rodchenkov becomes an international whistleblower, revealing that he helped design and implement a system that not only gave the Russian Olympians a drug-fueled advantage but then worked to hide the regimen from WADA and the IOC. And Rodchenkov claims this systemic cheating was overseen and ordered from the very top, Vladimir Putin. Yes, it’s another story of Russian conspiracies and urine, although maybe not the one you heard.

As “Icarus” gets deeper into Rodchenkov’s whistleblowing, it becomes less Spurlock and more Poitras. Fogel wisely steps out of the spotlight and often allows Rodchenkov to tell his stories with minimal interference. He clearly realized that a film that started as the story of a cyclist interested in doping in his favorite sport became something much greater. Rodchenkov honestly fears for his life as more and more details of the Russian conspiracy are recorded not just by the film but by attorneys, the IOC, and even the New York Times. When one of Rodchenkov’s colleagues dies under suspicious circumstances, “Icarus” takes on qualities of a thriller. Will Rodchenkov survive long enough to blow his whistle loud enough for the world to hear it?

There’s a skill to documentarians that know how to get out of the way, and that’s arguably what Fogel does best here. He could have stayed over-attached to his own story, but he smartly realizes that he’s stumbled on a far-more-interesting one. There’s also a palpable sense of empathy in Fogel’s filmmaking—he clearly became friends with Grigory, and he relays his love for the man through his direction and construction of the piece without over-idolizing a man who is, after all, admitting to destroying competitive balance on a world stage.

My one question though is who is the Icarus of this tale? At first, it seems like it’s Fogel, who tries to use the same drugs that cycling legend Lance Armstrong did but he crashes to the Earth. Then it could be Rodchenkov, although he personally never seems to have achieved the fame of the athletes whom he helped cheat. Maybe they are the Icarus of this tale, and Rodchenkov merely Daedalus, the man who built the wings of wax, sure to inevitably burn in the heat of the sun. 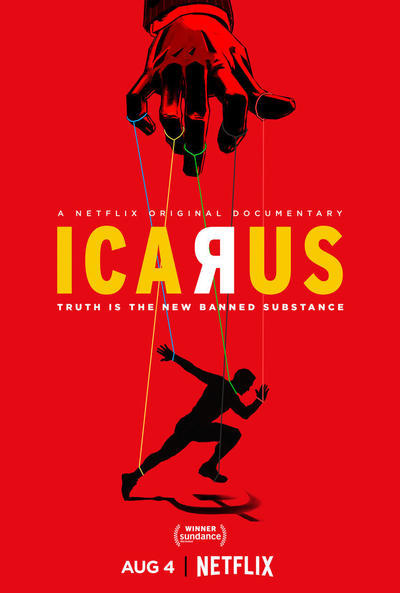 Bryan Fogel as Himself

Grigory Rodchenkov as Himself