Faith of Our Fathers

"Faith of Our Fathers," the latest Christian-themed film from the studio that produced "God's Not Dead" and "Do You Believe?", tells the story of two men whose fathers fought in Vietnam and never came back. The two mismatched guys, one a domesticated Christian yuppie, the other a rough sullen non-believer, team up to go on a road trip to Washington D.C. to visit the Vietnam Memorial and find their fathers' names. Over the course of the improvisational trip, they butt heads, they open up, and the "faith of their fathers," revealed slowly over the course of the film though the surviving letters written home from Vietnam, opens their eyes to redemption, grace and faith.

"Faith of Our Fathers" doesn't work, and not because of its Christian message. The main problems are the obvious script (every plot-twist can be seen coming from miles down the road), the bad acting, and the cheaply-done, unconvincing Vietnam flashbacks. Director Carey Scott (who wrote the script with lead actors Kevin Downes and David A.R. White) seems to hope the message will be enough. It's not.

Kevin Downes plays "John Paul George." His Beatles-inspired three first names are used as a joke in almost every scene. He's a good Christian guy, engaged to to Cynthia, a cheerful woman (Candace Cameron Bure) who's busy planning their wedding and practicing cooking meals for her husband-to-be. At Cynthia's suggestion, he sets out to find a guy named Wayne, the son of the man his dad befriended in Vietnam. Landed in Mississippi, he finds Wayne living holed up in a hillbilly shack, eating food he shot himself and grumpy about everything. (Notice that their two first names add up to "John Wayne." Subtle, this film is not.)

John and Wayne have a bumpy beginning. Wayne has a bunch of letters from his dad in his possession that mention John's dad, but he refuses to hand them over. He demands payment for each one. He blusters and grunts and chews Twizzlers and chomps on a toothpick, and it's a performance full of broad indicating that calls to mind James Dean's advice to a young Dennis Hopper: During the filming of "Rebel Without a Cause," Hopper was so impressed by Dean that he started imitating Dean's mannerisms. Dean noticed, and pulled Hopper aside, saying, "If you're going to smoke a cigarette onscreen, just smoke the cigarette. Don't act like you're smoking the cigarette." David A.R. White is very busy acting like he's chewing on Twizzlers, acting like he's doing everything. The character is a grotesque stereotype, but we soon learn of his pain and angst in a later scene, during the only good-looking shot in the whole film, the two men sitting in adjoining jail cells with golden light streaming in through the bars.

The impromptu road trip to D.C. is interspersed with flashbacks to Vietnam, showing their fathers becoming friends in the rainy "jungle" of 1969. Half of the time, the sun is clearly shining and there's fake rain coming down in the foreground. Dry-ice fog billows at night. Adding to the lack of verisimilitude is that we see these two men writing letters home on tiny scraps of paper with smudgy wet pencils all as the rain pours down on the paper, but back in the present, the letters the men read are all written on pristine loose-leaf paper that looks like it was torn out of a notebook yesterday. Details like this are not irrelevant. They matter.

In Vietnam, John's dad Steven (Sean McGowan) and Wayne's dad Eddie (Scott Whyte) form a bond. Steven reads his Bible all the time and the other soldiers rib him about it. His sergeant (Stephen Baldwin) scolds Eddie for talking about death and Heaven and the afterlife to the soldiers who should be focused on staying alive. Shades of the Christian persecution complex. Eddie is cynical, but drawn to Steven's strength and peace, and wonders if he's missing out on something. To give credit where it's due, both actors do a very convincing job in their scenes, bringing forth a believable sense of the fear and disorientation that comes with combat (especially when the confused commanders seem to be setting them up to fail.) Their scenes feature the strongest proselytizing message in the film, with Steven telling Eddie about Jesus and the Bible, but the actors "bring it" in a sincere and open way. Again, it's not the message that is the problem, ultimately. It's how it's delivered.

The wacky buddy road movie sections are strained and false, featuring many gigantic closeups of the men in the car behaving and reacting in broad ways to one another, and green-screen roads stretching out through the rear window (with a couple of scenes showing what is obviously the same stretch of road). Along the way, they have adventures, they pick up hitchhikers, get into fights with rednecks and accidentally buy a stolen car. Meanwhile, nag-Cynthia puts in increasingly threatening calls to John about leaving her, even though she was the one who suggested he find Wayne in the first place.

Many great films have explored Christian themes. There were the Biblical epics like D.W. Griffith's "Intolerance," or "Ben Hur" and "The Ten Commandments." More recently, there was the smash-hit of Mel Gibson's visceral "The Passion of the Christ." These films brought forward an explicit Christian message and did so with panache and scope, not to mention artistic seriousness. There is no excuse for a film with Christian themes to slack off artistically, considering those examples. More recently, there was "Calvary," with its story of redemption and sin in one small Irish town, or last year's Oscar-winning foreign film "Ida," which took issues of faith and devotion seriously, backdropped by ghosts of the Holocaust. Early this year came "Against the Sun," a true story about three WWII pilots stranded in a life-raft in the Pacific. It had a Christian message about strong faith in difficult times, and it was a well-done film. "Selma" showed how the faith of the civil rights leaders helped them stay strong in dangerous times, with African-American churches calling on their long history of protest and resistance. "Selma" did not condescend to the faithful, belittle them, or mock them. These are all serious films. But the lightweight Christian films, films like "Kirk Cameron Saves Christmas," or last year's dreadful "The Identical," or "Faith of Our Fathers", prioritize the message in ways that are amateurish and obvious. 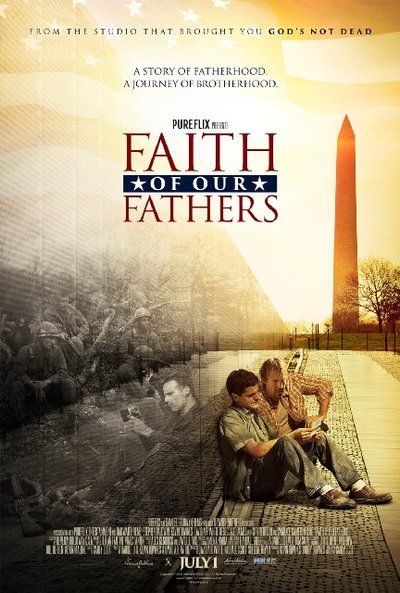