Arriving on the heels of Angelina Jolie's "Unbroken," which also featured a sequence involving a life raft adrift in the Pacific ocean during WWII, The American Film Company's "Against the Sun" tells the true story of an air crew who had to take to the life raft after their plane went down in the Pacific. The three man-crew was presumed missing at sea, after a cursory "box search" was done for them. It was January, 1942. "Against the Sun" is a respectfully told survivalist story of pilot Harold Dixon (Garret Dillahunt), bombardier Tony Pastula (Tom Felton), and radioman Gene Aldrich (Jake Abel) in a life raft with no food, no flares, no water, no supplies, all of it had gone down with the plane.

There's a universal appeal to such stories, perhaps because they enact a horrified sense of empathy and worry: What would I do in such a situation? How would I fare? Stories as varied as "Touching the Void," "All is Lost," "Lifeboat," books like Alfred Lansing's Endurance, Jon Krakauer's Into Thin Air, or Piers Paul Read's Alive: The Story of the Andes Survivors, examine the lengths human beings will go to to survive, the problem-solving stamina required, and how often it is the will to make it out of the situation that makes the difference.

"Against the Sun" takes place almost entirely in the life raft, with a short prologue showing the crew's final moments in the plane when they realize they have somehow flown off-course and don't have enough fuel to get back to the aircraft carrier. The film features three strong no-frills performances from actors who are quite literally on top of each other for the duration. Director Brian Falk, who co-wrote the script with Mark David Keegan, worked well with cinematographer Petr Cikhart to keep the story visually interesting, despite the limitations placed on the tale by the monotonous setting. Sometimes the camera is in the raft, the men's limbs pig-piling on top of one another, and sometimes the camera pulls back to long shots, the raft appearing tiny and fragile in that vast heaving ocean. There are a couple of effective overhead shots showing the sharks circling beneath the raft, or the men tearing into a raw fish with their bare hands, shoveling meat into their mouths.

The best parts of such stories are when the characters have to troubleshoot terrible situations. How will they make fish hooks? How will they gather water? What about sunburn? How will they know in which direction they are drifting, and how far? In Laura Hillenbrand's book Unbroken, she describes how Louis Zamperini and the other men in the raft would talk to one another about food back home, going into intense detail about recipes, and preparation. It was not just a way to stave off hunger, but to keep their minds sharp. The men on the raft in "Against the Sun" do that, too, pantomiming pouring one another hot cups of coffee, and discussing the foods they can't wait to eat again back home.

The script in "Against the Sun" is slightly over-written, with characters exclaiming things like, "Maybe if I could get one of these magazines open we could use the springs as a hook!" The real power of "All is Lost" lay in the fact that the character was alone. He had to troubleshoot by himself in a tense silence. It was all action and thought. There are nice touches, though, small unexpected details like the three men introducing themselves to one another once they clambered into the life raft after the crash. They shake hands as though they are at a dinner party. There's another nice scene when Aldrich suggests they pray together. The other two aren't sure, one isn't the praying type, the other only knows prayers in Polish. But they do pray, Pastula finishing it up with, "Dear God, I'll go along with what the other guys said, but mostly we need some rain, dear Lord." There's a realistic feel to moments like that, a practical and humorous edge.

There are a couple of hallucinatory sequences that don't quite work, and the score by Paul Mills comes swooping in, insistent upon being inspirational in a way that feels like unnecessary underlining. One doesn't need the score to be inspired by these guys' gritty will to survive. 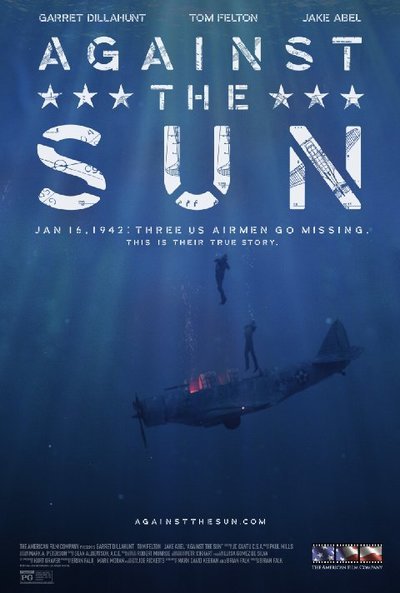