“Extraction” is based on a graphic novel that was written, and is now adapted by, "Avengers: Endgame" co-director Joe Russo as a starring vehicle for Thor himself, Chris Hemsworth. Shorn of his blonde locks, his mighty hammer, and his sense of humor, Hemsworth plays a superhero mercenary for hire named Tyler Rake. With a name like that, you can bet your last money that at some point during the film’s 116-minute runtime, Tyler will take a baddie out with the garden instrument that bears his name. It’s a gnarly kill, right through the eyes of one of the hundreds of expendable extras. Such grotesquerie signifies just how hard the R-rating will be on this Netflix release; heads are treated poorly, broken bones protrude and bodies are flung from buildings and riddled with bullets. Not that I’m complaining, mind you, considering how welcome it is that stunt coordinator-turned-director Sam Hargrove frames the carnage in well-edited, easy-to-follow chunks. I’m just letting you know what you’re in for here.

The event of the title involves Ovi Mahajan (Rudhraksh Jaiswal), the adolescent son of an imprisoned Mumbai gangster. He’s kidnapped by his father’s rival, Amir (Priyanshu Painyuli), which puts Ovi’s protector Saju (Randeep Hooda) in mortal danger. The elder Mahajan can’t pay the ransom because his finances are frozen, but his syndicate still hires Rake to rescue his kid. This latest mission comes to the drunk Aussie’s attention courtesy of his colleague, Nik Khan (Golshifteh Farahani). The percentage for failure is high, but it’s not insurmountable. Plus, Rake needs the money and he has a death wish. That latter thing may have something to do with the hazy flashbacks interspersed throughout the first half of “Extraction.”

Hemsworth’s character has more action movie clichés than Carter’s got liver pills: He’s unflappable even in extreme danger, he’s got a tragic secret, he never misses a shot, he abuses various legal and illegal substances, and he makes the kind of friends who invariably will turn on him at inopportune moments. But he’s also got a softer side, a paternal instinct that comes out once his rescue mission goes violently awry. He refuses to abandon Ovi even after the kid becomes expendable. “Do you trust me?” he asks. Ovi replies that he does not. “Good,” says Rake before pushing him off one roof and onto another.

Helping ruin Rake’s day and raise the body count is Saju, who’s running his own extraction plan at his boss’ behest, and Amir’s army of vicious killers. They all figure prominently in the film’s exciting centerpiece, a rowdy sequence where cinematographer Newton Thomas Sigel evokes the one-take gimmickry of last year’s "1917." It starts and ends with a car crash and warrants as many repeat viewings as the Netflix platform will allow. Most importantly, Hargrove abandons the device before it becomes obnoxious.

Russo’s script moves fast but his villains are flat and one-dimensional. Amir is nothing but a glowering sadist who has his henchmen fling children off buildings when he’s not hiring them as killers. The film’s attempt to generate sympathy for Rake’s predicament comes off like a job interview, as Ovi peppers him with questions about his past while Hemsworth tries to be macho and emotionally wounded. He almost pulls it off, too. This excuse for exposition is bookended by visits from Gaspar (David Harbour), a fellow mercenary who “owes Rake his life.” Harbour is appropriately smarmy, but his character brings a shocking plot development that the script doesn’t have the guts to address further.

“Extraction” climaxes with an intense, well-staged gun battle on a bridge blocked by Amir’s henchmen. We get a brief flash of this action at the beginning of the film, with Rake taking several bullets and dragging his bloody body across the concrete. When we return, we’re privy to a slight pivot toward a different character with the film’s tragic hero and Nik Khan finally taking up arms instead of just being Rake’s eye-in-the-sky. We also get a muddled grasp at irony and a final shot that’s an absolute cheat. No matter what we’re getting at any given time, it’s always punctuated by bullets whizzing through flesh and explosions warping buildings and vehicles.

Throughout the mayhem, Ovi is treated less like a child in distress and more like the kind of kid you’d find in a Shane Black movie, though he isn’t world-weary enough to weather Black’s cynical universe. Jaiswal and Hemsworth have a winning chemistry that attempts to soften the uneasy optics of a White guy violently blasting through a sea of brown villains. There are armed kid villains too, but Rake just beats them up. You can’t blame him for that; they’re trying to kill him! But I wonder if this element would be as nonchalantly depicted—or depicted at all—if Rake were in Norway instead of India and Bangladesh. Something to consider while you enjoy the carnage. 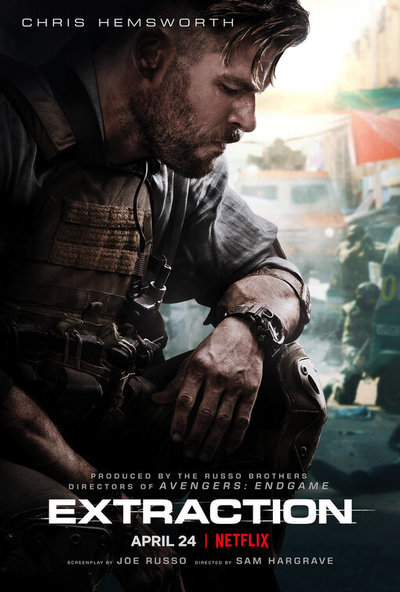 Rated R for strong bloody violence throughout, language and brief drug use.

Writer (based on the graphic novel "Ciudad," from a story by)