There is no American nonfiction filmmaker as simultaneously difficult and accessible as 86-year old Frederick Wiseman, whose 44th film, the documentary “Ex Libris: New York Public Library,” opens this week at Film Forum in New York City. All of Wiseman’s movies use a variation of a strategy he’s been employing since the late 1960s, when he broke through with “Titicut Follies,” about a mental hospital; “Basic Training,” about the U.S. Army during the Vietnam war, and “High School,” about public education. Wiseman chooses a subject, usually an institution that’s either resisting change or leaning into it. Then he explores it with multiple cameras, watching what happens in and around various rooms and buildings, generating mountains of raw footage (during the days of celluloid film; now it’s hard drives full of video), then goes into the editing room and figures out how to arrange it all.

Every documentary practices a version of that process, of course. But Wiseman’s approach feels more immediate and unadorned. And now that more and more documentarians are shaping their work to resemble fiction films—aping the structure of the muckraking TV expose, the heist thriller, the war movie, the sports film and so on—his approach feels stubbornly retro. Many of his documentaries run between two and four hours. There are sequences that spend several minutes watching people talking to each other, or failing to communicate. But then you settle into the peculiar rhythm of the thing and realize that there’s a subtle, intuitive structure to the way that A leads to B, B leads to C, and so on. The editing doesn’t make blatant arguments, but it does suggest ways of seeing.

Clocking in at three hours and seventeen minutes, “Ex Libris” at first seems like one of his least polished films. There are long scenes where speakers address crowds, moderators interview famous people on stages, anonymous citizens clean floors, advise tourists and sift through microfilm, and administrators argue about funding and policy behind closed doors (a process that nearly always boils down figuring out how to do more with less). Almost every scene changes direction or tone several times, to the point where you can imagine a rhetoric teacher shouting, “Digression!”

An early sequence shows Khalil Gibran Muhammad, director of Harlem’s Schomburg Center for Research in Black Culture, speaking to a crowd at Macomb’s Bridge branch, a quarter mile north of the main branch on 42nd Street (the one with the lions). Muhammad talks for a while about the lived experience of poverty in communities of color. Then he segues into a freewheeling gripe session about how state-approved textbooks oversimplify or distort history. This same film shows celebrities, including rock stars Elvis Costello and Patti Smith and essayist Ta-Nehisi Coates, visiting major branches to speak to crowds. We also meet an author in a small lecture hall who notes that, while there are countless books and films about the first wave of European Jewish migrants settling on the Lower East Side of Manhattan, there aren’t nearly as many about the second generation, which deserted urban centers for the suburbs after World War II, taking their culture with them. This morphs into a slide show about the Jewish deli as cultural center. The photos cover the first half of the 20th century.

I’m pretty sure the author described in that last bit is Ted Merwin, and the book is Pastrami on Rye: An Overstuffed History of the Jewish Deli in America. I say “pretty sure” because Wiseman doesn’t identify people with title cards, like 99% of documentarians. Some consider this an affectation, but it’s part of Wiseman’s method. His films encourage you to consider what’s happening right in front of you, at that moment, then jump way back, putting that moment in context.

What’s key here is the idea of the library changing, in the digital era, to become less focused on physical books filed on shelves according to the Dewey Decimal System, and more devoted to the exchange of information—not just digitally (by making computers and Internet access available to those who might not otherwise be able to afford them), but by creating a series of public events that encourage people to gather together and exchange information and ideas. Wiseman's editing arranges footage of these events so that the library begins to seem like an intellectual and cultural circulatory system, similar in form to subways, highways, and water pipes.

This notion infuses every scene in the film, from the lecture about the central importance of the deli in Jewish urban life to Costello discussing the role of the singer-songwriter in shaping political attitudes; a group of art students searching through image files containing photos and illustrations that have been grouped by situation as well as subject; firefighters and border patrol officers hyping their professions during a jobs fair at a Bronx branch, and Muhammad describing how public school textbooks distort students’ perceptions of slavery.

The idea of “communication”—what it means to get your point across, how you go about doing it, and why some people do a better job of it than others—is explored through Wiseman’s freewheeling juxtaposition of public speakers. Some are so charming that they could mesmerize a room by reading a cracker box. Others can barely get through a sentence without stumbling over their words, or letting their anxiety or enthusiasm overwhelm what they’re trying to say. An ineffective or confusing staff member or public speaker can impede the flow of information through the system, like leaves constricting water flow through a drain pipe.

"Ex Libris" is not one of Wiseman’s tight, sharply focused works. It's sprawling and digressive, seemingly by design. It’s not as searing and revelatory as his two “Domestic Violence” documentaries set in shelters for battered women, as compact and intimate as his 2010 classic “Boxing Gym,” or as symphonic as “In Jackson Heights,” a portrait of a Queens neighborhood that bears favorable comparison to “Our Town” and “Berlin: Symphony of a Great City.” There are long sections where the film just seems to give itself over to whatever person happens to be onscreen, fixating on them like library patrons who miss appointments because they got immersed in an old magazine or randomly chosen coffee table book. (“Ex Libris” seems to acknowledge that Wiseman’s approach here might not be everyone’s cup of tea: there are regular cutaways to people texting, zoning out, even napping.)

But the film’s boundless enthusiasm for the idea of the library wins the day. “Ex Libris” portrays the New York Public Library system and by extension all such systems as counterweights to anti-intellectual attitudes, and barrier-eroding forces that help nourish a sense of community and collective responsibility in an era of technologically induced loneliness and narcissism.

“Ex Libris” is also filled with cool stuff that you’ll want to tell other people about. I still haven’t gotten over learning about how, in the pre-Internet days, an commercial artist might go to the library and say, “I need pictures of dogs in motion, for a magazine illustration I’m supposed to draw,” and a clerk would go to a storage area and pull out a folder: Google with live human beings. This is not a hypothetical description, by the way. Wiseman makes sure to give you close-ups of images in the dog file. There’s a whole other movie in that scene—one of dozens in an endearing shaggy dog of a documentary. 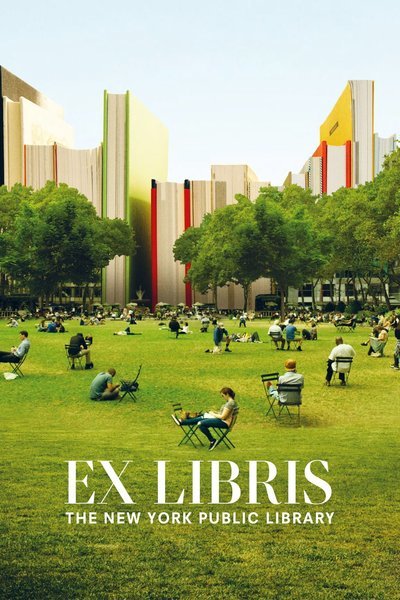