Every Thing Will Be Fine

The opening and closing sequences of "Every Thing Will Be Fine," the first fiction feature from German director Wim Wenders in almost a decade, are among the most masterful he’s created, and over the course of his long career he’s created quite a few such scenes … and, more to the point, quite a few such whole films. But bear with me.

The opening sequence sees young writer Tomas (James Franco) seeking space to create in a fisherman’s hut on a frozen lake. Dispirited, unproductive, he tools around on land a bit, having intermittent tetchy phone conversations with his girlfriend Sara (Rachel McAdams). Driving in a snowstorm, he’s distracted, and has an automobile mishap. He’s relieved to find a completely intact, but very shaken up child propped right next to his front bumper, and walks the boy to the remote farm house up the hill, from which he was no doubt darting out with his plastic sled. Once they get to the house, the other shoe drops when they meet the boy’s mother, Kate (Charlotte Gainsbourg). There’s almost no dialogue, only a calm command of cinema language, conjuring suspense, dread and poignancy, enhanced by Wenders’ expressive use of 3D, a format he also used for his spectacular 2011 dance documentary “Pina.”

So far so good, at least as far as the movie is concerned. Not so much for Tomas, who’s traumatized by the accident to the extent that he checks out on life big time, ending in a hospital bed after what Sara recognizes as a half-hearted suicide attempt. So, yes: this is a movie in which James Franco plays a white, male, mostly-self-tortured artist, coping with a major spiritual crisis. What could be worse?

In theory, I agree with you. And in practice, “Every Thing Will Be Fine” wears a certain preciosity on its sleeve, starting with the title, with its deliberately broken “Everything,” oy. One might suspect The New Sincerity in action, except that Wenders has always been a one-hundred percent sincere filmmaker, whether creating such acute stories of existential anxiety as “The American Friend,” luminous, mysticism-laden parables of love like “Wings of Desire,” or atrociously soft-headed meditations on being a man out of time, as in his dire 2008 “Palermo Shooting,” his most recent fiction feature and not a particularly good omen for this one.

“Every Thing Will Be Fine” is in a very real sense thematically quaint, and too often the screenplay, by Bjørn Olaf Johannessen, is spectacularly verbally maladroit, not to mention vague. “Neither of us is fine … we want different things in life … I just want to write … ” is the sort of thing the performers have to work with for the first half of the movie. As irritating as the commonplaces are, and as distractingly bad as the dialogue gets, glints and glimmers of perception and feeling find their way out from the 3D frame. Gainsbourg’s single mom character, an illustrator, has a quiet, enigmatic dignity, and the scenes at the center of the film between her and Franco seem to want to take the narrative in a more expansive direction, away from the commonplace solipsism of Tomas’ character, who by this point has moved on from Sara and into a relationship with Maria Josée Croze’s Ann, herself the mother of a young girl. The narrative, as it happens, moves across a span of twelve years, and does go to some disturbing and unexpected places. Tomas’ encounter with Sara many years after the fact is satisfying in a way the filmmakers perhaps did not intend, but I can’t be too confident about that.

And Franco actually does mostly alright by his possibly impossible character. His inspired work in “Spring Breakers” notwithstanding, he’s been frittering away his credibility as a dramatic actor for some time, but given the lack of detail he’s got to work with here, he’s not a presence you want to eye-roll off the screen. Although the point in the film at which his performance needs to gather strength—a tense kitchen-table confrontation with another male near the end—is exactly the point where he trots out his stoner squint-and-smirk; not really the right choice. Elsewhere he’s fine, and particularly fine when his character is called upon to examine his own lack of affect.

“Every Thing Will Be Fine” is far from a perfect film. But Wenders is trying to do new things within the confines of a pretty standard European art-film scenario, and the viewer can see he’s not approaching the material as though it’s rote; he’s really trying to use the camera to get through the feelings of loss the characters suffer. Wenders is also the author of a book of essays called “Emotion Pictures,” and he once again brings some honor to that concept with this flawed but intriguing work. 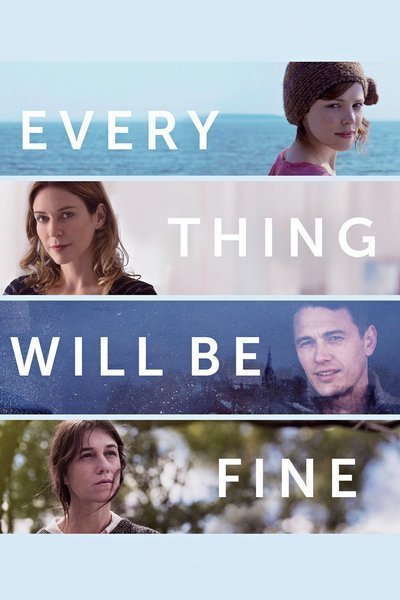