"Empire of Light" is a grandiose title for Sam Mendes' intimate new character drama, which starts out a bit dim and unfocused and becomes sharper and more illuminating as it unreels.

The story is set in the fall and winter of 1980-81 in the seaside town of Margate, Kent, around a palatial two-screen Art Deco theater that shows films that were new back then (including "Raging Bull," "Stir Crazy," and "9 to 5") and that fed the imagination of young Mendes, who based parts of the script on his youth. The result keeps seeming as if it's about to fully commit being another "Behold The Magic of the Movies" movies (we get a couple of those a year, at least; film awards voters like them) as well as a quasi-memoir that puts a new frame around an established director's work (there have been several of those recently as well; sometimes they're the same movie). And in the first third of "Empire of Light," there are many warning signs that the film is going to amount to nothing more than an Oscar campaign for itself. There's a projectionist played by Toby Jones who demonstrates how a projector works and talks about the persistence of vision and how light can shut out darkness. Various characters keep urging the heroine, the lonely, workaholic duty manager Hilary Small (Olivia Colman), to go sit in an auditorium once in a while, and let cinema transport her away from her miseries (one guess as to whether she takes their suggestion).

Mendes and his cinematographer Roger Deakins use the panoramic screen shape to emphasize how ordinary lives unfold within a landscape of history that the tiny figures in its foreground can't fully comprehend. The problem is that, at first, all the characters are written Small, not just Hilary: figurines of "ordinary people" that would seem condescending if the performers didn't give them life through body language and intonation, and if Mendes and Deakins didn't frame and light them with such care.

We see sad-eyed Hilary rallying herself to banter with the staff, having a furtive and degrading sexual encounter with her married boss Mr. Ellis (Colin Firth), eating alone and walking alone and sitting in her apartment alone, and sliding down into a tub and staying underwater (the gestural expression of a suicide wish). Her newest trainee, an affable and handsome young Black man named Stephen (Micheal Ward), connects with her so strongly that we know a rejuvenating (though inappropriate) workplace affair is right around the corner. Ward brings an early-1960s Sidney Poitier energy to the role: the character is engaging and witty and game for anything, but wise about how brutally post-Thatcher England treats people like him.

But he remains an abstraction for too long, to the point where it looks like the film is setting him up as more of a plot device (or sacrificial lamb) than a man. The movie trembles with intimations of impending doom for Stephen, and the dialogue mentions then-recent racial incidents. But Mendes presents his anger, fear and distress with the same dissociated stare that freezes Hillary in her tracks when she sees skinheads tormenting Stephen on a sidewalk. Here, as in other parts of the film, the storytelling is jumbled. And it seems less easygoing (in the manner of a "hangout" movie) than inclined to digress for rhetorical purposes. You can't tell if a scene seems perfunctory or underwritten or flat because the movie doesn't want to give you too much too early, or if it's one of those films that's can't decide what to do with itself.

Eventually, though, "Empire of Light" finds its groove and stays in it. The positive transformation is so sudden and surefooted that it might make you wonder why the film didn't lay all its significant narrative and characterization cards on the table in the first few minutes and jump to what's interesting: the tension between the social obligation to help people who are troubled or otherwise in need, versus the collateral damage that tends to happen when the helpers don't realize that their own compulsions are in the mix, too.

Slivers of biographical detail are offered in the first few scenes, but don't get explored with sensitivity and in detail until (too much) later. Hilary, for instance, is on Lithium and had to go on medical leave from work a year earlier; absent an immediate, layered presentation of these factors, a lot of the early scenes read as a compendium of Sad Single Lady movie cliches. Stephen, likewise, is not the bright but opaque Nice Outsider Who's Too Good for This World that the film lets us think he is. The most important person in his life is his mother, a workaholic single parent who has been a nurse for decades and taught her son that he has a moral imperative to heal wounded creatures (such as the pigeon with a broken wing that he tends in an early scene with Hilary). You don't need a therapist to figure out how these two ended up together, much less know that their affair can't last—and shouldn't, considering the forces roiling in both of their heads. (Between Stephen and Hilary's on-site trysts and Ellis' exploitation of Hilary, this theater is an employment lawyer's gold mine.)

Mendes has said that Hilary is based partly on his own mother, so it's not surprising that "Empire of Light" is at its best when it's simply observing her behavior (and Colman's acting). The filmmaking subtly shifts points of view, depending on whether Hilary is in a scene by herself or with others. Sometimes we're over her shoulder, or in her face, experiencing what she feels, and rooting for her to impose a narrative on her life that will reclaim her dignity and solve her problems, by turning her into the hero of one of the films she's heard other people describe but hasn't seen for herself. Other times we're more in the headspace of Stephen or one of the other theater employees (including Tom Brooke's gabby, nosy Neil, who figures out what's going on with Stephen and Hilary). We understand how big a mess her life is, and that most of the other characters aren't models of peace and stability, either.

Colman inhabits Hilary with her customary fullness and impeccable judgment, always putting her energy into conveying the character's churning, contradictory feelings rather than trotting out the virtuoso tricks and mannerisms that too often signify Great Screen Acting: English Division. When Hilary is at her lowest, with tears in her eyes and lipstick on her teeth, the sight pierces as deeply as seeing someone you know crater in front of you.

Ward can't match her because the material isn't on the same level, but he's still remarkable. His greatest achievement is convincing you that the character has his own inner life that's as complicated as Hilary's, even though there's little in the script to support such a claim. The last 15 minutes nearly undo all the good the film's second half has done: it feels as if Mendes is using a public calamity to forcibly merge the character study, historical/political epic, and Magic of Cinema elements that were on parallel tracks until that point. (Maybe the problem is that each of those tracks needed its own film.) Fortunately the concluding scenes pull the movie back from that particular brink, settling on a "life goes on" sort of ending.

"Empire of Light" never entirely coheres, but it's worth seeing for the power of Colman's lead performance and the expertly judged backup acting (by Firth especially; Ellis is a minor-league scumbag with delusions of respectability, and the actor presents him without editorial comment, which makes his actions feel more real).

The true star of the film, though, is Roger Deakins, who has steadily become the closest thing to an heir to Gordon Willis that 21st-century cinema has allowed. Like Willis, who is best known for shooting the "Godfather" films and several classic paranoid thrillers, Deakins loves silhouettes, long shadows, and high-contrast lighting. He isn't afraid to try to create an iconic, overwhelmingly potent image, but here—working in subtler key than he's usually asked to play in—he seems to let the natural world guide his decisions. The film's look errs on the side of simplicity, highlighting beauty that's already present rather than superimposing it with technique and technology.

There isn't a dull or purely functional composition in the film, nor is there one that tries so hard to be weighty that it crushes Mendes' wilting-flower characters. Deakins lets door frames and window frames, support struts, roof eaves, stairwell railings, and the lines of sidewalks and streets guide our eyes and create frames within frames. The movie even attempts some multi-panel effects, like a sequence of thematically similar paintings hanging on the wall of a gallery, and smuggles little grace notes into every scene and lets us find them on our own, seemingly not worried about whether we might miss them. Notice, for instance, how he and Mendes will put a reflective surface somewhere in the frame that lets us see the faces of characters placed in the foreground with their backs to the camera. You might not notice the other character's reflection right away because they aren't visible at every moment, only sometimes—as a real person would be. 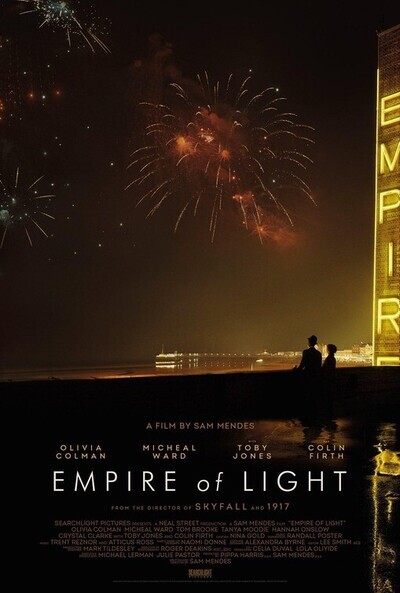