This originally ran on February 21, and we are re-running because of its early VOD drop.

There was a two-year period in the mid-1990s when Emma Woodhouse was everywhere. First came Amy Heckerling’s “Clueless," a modern-day classic with the action of Jane Austen’s 1815 novel transported to 1990s-era Beverly Hills. The following year came two versions, one on film, starring Gwyneth Paltrow, and the other on television, starring Kate Beckinsale (a perfect actress for this type of material; see Whit Stillman’s “Love & Friendship,” based on a story Austen wrote at 14). About 10 years ago, there was a BBC mini-series adaptation. You’d think we would be Emma-ed out by now. Not so. The new adaptation, starring Anya Taylor-Joy, and directed by Autumn de Wilde, is here, and it’s wonderful!

Emma may live alone on a giant estate with her father (Bill Nighy), but her world is very crowded. She has “taken on” Harriet (Mia Goth), an orphaned girl of unknown parentage, boarding at a local girls’ school. Harriet has a crush on Mr. Martin, a humble widowed farmer (Connor Swindells), and based on Harriet and Mr. Martin’s interactions, her feelings for him are reciprocated. Emma can’t bear this (a farmer? To quote Cher in “Clueless": “As if!”), and basically throws Harriet at the vicar, a smarmy Mr. Elton (Josh O’Connor). This fails spectacularly, since Mr. Elton falls for Emma instead of Harriet. There’s more. (There always is in Austen.) Emma floats above attachments, and yet she is drawn to a man who isn’t even on the scene for half the movie, a Frank Churchill (Callum Turner), who is wealthy and about to be wealthier. A wrench in Emma’s plans arrives in the form of Jane Fairfax (Amber Anderson), the niece of a local woman (Miranda Hart), who floats into town, soaking up all the male admiration, irritating Emma. Emma is a glorious brat. Meanwhile, Mr. Knightley (Johnny Flynn) sees through Emma. The two have known one another since childhood, and she can’t “put on airs” with him. He won’t allow it. He sees what she’s doing, and he doesn’t like it. He calls her on it.

Match-making is tricky. It requires subtlety and finesse. It probably, also, requires a professional. Left in the hands of enthusiastic amateurs, match-making often leads to heartbreak. Jane Austen understood this dynamic all too well, and in Emma—the last novel to be published during her lifetime—she brings us an irrepressible and confident match-maker, albeit a totally incompetent one. Emma thinks she knows best, when in reality she wreaks havoc. Unlike the majority of Austen’s heroines, Emma has her own fortune, and therefore feels no pressing need to marry. She’s seemingly totally un-interested in the subject for herself.

Autumn de Wilde’s approach to this tale of frenzied and complicated social activity is both elegant and comedic. Charm is one of the hardest qualities to capture (or even explain), and there is genuine charm here. The performances are uniformly excellent, each actor bringing depth and shading to their characters (even the hovering footmen, who never say a word, clearly have opinions about the people they serve. Watch the behavior in the background of scenes!) Jokes set up in the beginning of the film (like the schtick with the fire screen, for example) pay off big in the final scene. This kind of thing takes real care, a sensitive and pointed accumulation of details which add up to the unmistakable sensation that those palatial estates are inhabited by living breathing eccentric people.

Taylor-Joy, one of the best new actresses today, does not try to make us like Emma, and does not attempt to soft-pedal Emma’s selfishness. She does not try to be adorable. Austen herself knew that nobody (save her) would probably “like” Emma. Instead, we see a woman who rushes headlong into chaos, for her own reasons, some of which she isn’t even aware of herself. Johnny Flynn, a singer-songwriter-actor (who plays David Bowie in the upcoming “Stardust"), is just superb here, a perfect Austen romantic lead. Knightley is independent, a little bit lazy, and also vaguely cranky. He, like Emma, lacks self-awareness. When he takes Emma down a peg (as he does, over and over again), there’s such a sense of conviction in him that the movie holds its breath, especially since it’s overwhelmingly obvious that these two prickly people should get it over with and start kissing one another as soon as possible.

Autumn de Wilde has a busy career as a photographer and director of music videos and video shorts. This is her first feature, and she comes to it with panache, confidence, and a welcome sense of bravado. “Emma.” has a bold vision and style, with cinematographer Christopher Blauvelt, costume designer Alexandra Byrne, and production designer Kave Quinn, working in sync. The needle drops—of traditional English songs thrumming over the green landscape—are perfectly placed, and all of it pours into the thematic and textual concerns of the film, highlighting not only the artificiality of Regency society (its pretensions, colors and textures) but the swirling undercurrents of human feeling, which the surfaces desperately try to hide and/or suppress. The hats perched on women’s heads look like giant predatory birds. Schoolgirls wear red hooded cloaks, and march in unison through town like a bunch of Little Red Riding Hoods (or Margaret Atwood’s Handmaids).

The actual title of the film is “Emma.” Period included. This is very intriguing. What does “The End” even mean to Jane Austen? Happily ever after? Not so fast. The portraits of married life Austen provides are not encouraging. There’s the married couple in Sense and Sensibility, complete with squalling baby, echoed in Emma by two other young married couples, neither of which suggest “domestic bliss.” I always think of the final sentence of Sense and Sensibility, which—on the surface—suggests a happy ending, but just count all of the negative words!

Between Barton and Delaford, there was that constant communication which strong family affection would naturally dictate, and among the merits and the happiness of Elinor and Marianne, let it not be ranked as the least considerable, that though sisters, and living almost within sight of each other, they could live without disagreement between themselves, or producing coolness between their husbands.

Ambivalence, thy name is Austen. De Wilde understands this intimately. Her cast understands this. Emma’s ambivalence towards marriage goes mostly unremarked-upon, although it is the proverbial elephant in the room. The sexual heat and romantic chemistry generated between Emma and Mr. Knightley (and Taylor-Joy and Flynn) could light up those gloomy estates single-handedly. Maybe such heat is worth holding out for. 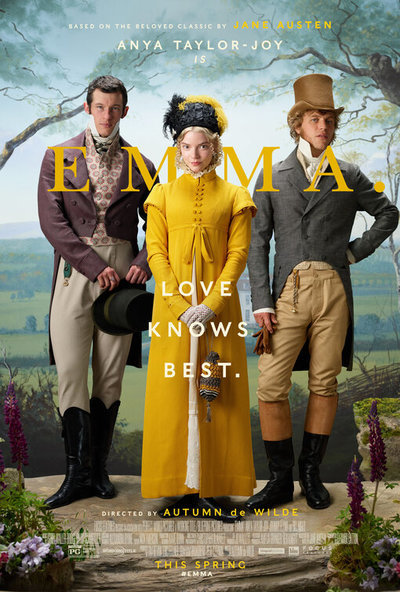