Two white photographers/abolitionists arrange Peter's posture as he sits in a chair. They ask him to turn his scourged back toward the lens, to move his face to the side. The lens pushes in on him, and a totem for the ravages of virulent racism engraved across his body comes into view. Peter asks, "Why are you doing this?" The photographer reverently responds: "So the world might know what slavery truly looks like." In a film that doesn't care much about the universally historic impact of the image known as "Whipped Peter," the conversation is ironic. Because over 150 years later, we're still distributing depictions of the horrors of slavery, albeit, in the last half-century, through the power of the movies.

Granted, director Antoine Fuqua's "Emancipation" isn't wholly about enslavement. Instead, it sustains itself in the tension of biography and thriller, brutality and heroism, prestige drama, and suspenseful action film. If that tension between disparate styles and unlikely tones was intended, one might say that "Emancipation" is a keen attempt to recapture the subversive slave narratives in Blaxploitation. The character of Peter and the propulsive mood of Fuqua's film have more in common with "The Legend of Nigger Charley" than "12 Years a Slave." It's not altogether clear, however, that Fuqua's choices are all that intentional to believe he purposely wants this sort of uncomfortable genre-bending.

Who is Peter? A symbol, a resilient rebel, a family man, an action star this side of Rambo wandering the swamp and fighting with slave catchers and alligators? Fuqua believes Peter is all of the above. Unfortunately, in wearing these many hats, "Emancipation" becomes an exhaustive, vicious, and stylistically overcooked recounting of a man whose very visage led the abolitionist charge. "Emancipation" is a hollow piece of genre filmmaking that rarely answers, "Why this story and why now?"

Set in 1863, in the wake of Abraham Lincoln signing the Emancipation Proclamation, the true story begins with a series of drone tracking shots that make their way through the wooded swamp, stretching over a cotton plantation whereby enslaved African Americans, who appear placed in by garish VFX, toil in the soil. In a shack, a doting Peter (Will Smith) caresses the slender foot of his wife Dodienne (Charmaine Bingwa) with water as their children surround them. They are God-fearing people who believe the lord will grant them strength and salvation against white folks who see them merely as chattel. Their faith, unfortunately, cannot hide them from the realities of this system: Two white men drag Peter from his family, causing him to pull the frame of the door from the walls in an attempt to stay with his loved ones. He has been sold to the Confederate Army as manual labor for building a railroad.

In a previous world, before slapping Chris Rock at last year's Oscar ceremony, Smith must have imagined this as his Oscar moment. And the diligence to reach such acclaim is apparent, and sometimes too evident. For Smith, Peter is slightly different from the prototypical roles he plays. Smith tosses away his clean-cut look for a messy, unkempt, and scarred appearance. Never a master of accents (his infamous performance in "Concussion" says as much), Smith opts to go the route taken by British actors who alter their voice to an American tone; he lowers his voice an octave and adds a few necessary inflections. The result is a controlled sonic turn that flattens the emotional range of his speech. Still, Smith's physical transformation can't be wholly ignored. Peter is unafraid of looking white men in the eyes or standing up for his enslaved friends, even if it means death. The slightly hunched posture Smith walks with says that Peter is bent but never broken (an appearance that could carry additional weight if William N. Collage's on-the-nose screenplay didn't have Peter use that exact description to describe himself).

Peter's resilient spirit soon catches the eye of notorious slave catcher Fassel (Ben Foster). Not content with allowing the menacing Fassel to portray his God complex, Collage's script again makes the characterization obvious when Fassel tells Peter that he is his "God." At every turn, you get the sense that "Emancipation" could easily be an intelligent interrogation of the role of religion in slavery. But Collage and Fuqua aren't capable of moving past a surface-level examination of such fervent faith in relation to a system that makes one feel spiritually gripped with the notion of salvation. Instead, Fuqua speeds toward what he knows: action. Peter and a couple of other enslaved men break from the camp in a bid for freedom by traveling for five days through the treacherous swamps toward Lincoln's army.

Peter's escape takes up much of the film's bloated run time as he traverses over hellish landscapes devoid of color, recalling the war-torn landscape of Andrei Tarkovsky's "Ivan's Childhood" and the apocalyptic flare of Barry Jenkins' "The Underground Railroad." Unlike those works, frustratingly, "Emancipation" doesn't use the trek to flesh out these characters fully. Despite Foster's best efforts, Fassel remains a brooding, ferocious bigot who's a pale imitation of Joel Edgerton's humanist, multidimensional work in a similar role in Jenkins' miniseries. Peter veers closely to how Kasi Lemmons rendered Harriet Tubman in "Harriet," he sees visions from God and experiences divine assistance in his pursuit of freedom. We also witness his resourcefulness as he evades his hunters through his intelligent tactics. But we do not get any sense of personality. Apart from his unflinching devotion to God and his family, what makes Peter, Peter? Does he have a sense of humor? A fond memory with his wife or a personal foible? He speaks Creole. But other than that, he can only be described as nobly sweaty.

And the same might be said of the staid, unimaginative crafts: Too often, Fuqua and cinematographer Robert Richardson ("Once Upon a Time ... In Hollywood") mistake sweeping images for big emotions, as though a drone shot gliding over a desolate color-zapped field will break the cynical veil of a viewer already turned off by such bleak narratives. It's especially grating because the pair hits that well more than a few times, causing the film to sag with visually unoriginal repetitiveness. The drudging score doesn't add any further life to the proceedings either. Is the chase from enslavement toward freedom supposed to be inarticulately rendered, so unlived in, so clearly gruesome without the land ever becoming a real environment?

Peter eventually joins the army, discovering triumphs as a soldier akin to Edward Zwick's "Glory." Fuqua composes epic battle sequences that lack the verve of a tightly choreographed tug-of-war between warring sides and chooses ostentatious explosions. "Emancipation" hurries toward a happy conclusion that somehow feels unearned in a film that requires the viewer to sit through two-plus hours of degradation to arrive at this moment of solace. The journey to get here doesn't carry the necessary subversiveness or humanization. Fuqua's film needs to either fully embrace the action components for a full Blaxploitation tilt or lean closer toward its prestige aims to work. "Emancipation" is too constrained to be freeing.

In theaters today. On Apple TV+ on December 9th. 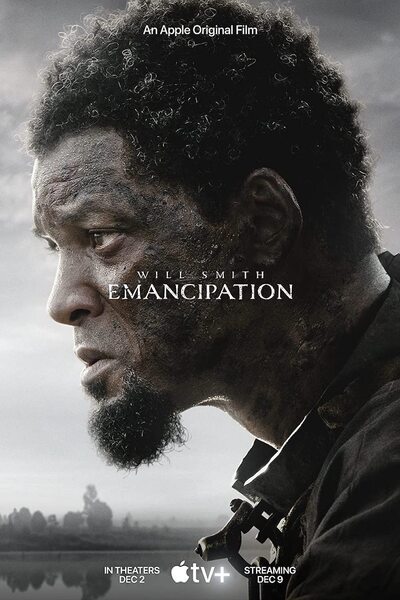 Will Smith as Peter