Harriet Tubman’s incredible life story instantly screams cinematic. Yet somehow, the renowned icon, among the most celebrated freedom fighters of American history, has never been given a major movie to her name before; a fact that is all the more frustrating considering Hollywood’s insatiable appetite for biopics that feature important male figures. Through her assured feature “Harriet,” director Kasi Lemmons (“Eve’s Bayou”) thankfully rights this long-standing wrong with passion, putting forth an appealing retelling of Tubman’s rousing tale, while we still wait for the delayed issuing of the new $20 bill slated to honor her legacy. It’s one that involves peerless contributions to abolitionism with hundreds of lives saved, after Tubman, played by a stirring Cynthia Erivo here, escaped from the hands of her slaveholders in the Maryland of 1849 at great risk and steadily became a fearless, storied conductor on the Underground Railroad.

Before she fled her ill fate, Tubman was known as Araminta “Minty” Ross, working at the Brodess plantation alongside her family members that included her husband John (Zackary Momoh); a free man on paper but not quite in practice in the racist South. Embellishing it with brief and well-parsed flashbacks, the joint screenplay by Lemmons and Gregory Allen Howard diligently portrays the tail-end of Minty’s days down in the Dorchester County, swiftly introducing us to the plantation’s soon-to-be-departed patriarch, his ruthless son Gideon (a chilling Joe Alwyn) and the countless horrors of life in bondage.

And Minty manages to escape from it all through a series of acts that often feels like divine mysteries guided by faith and the bright light of North Star. At first, she runs away on a whim after facing permanent separation from her loved ones and being told by the merciless Brodesses that her children, should she have any, can’t be born free regardless of a law (and a letter from a lawyer) that states otherwise. But despite eventually making it to the Pennsylvania border with the prospect of a new life and fresh start, Harriet—her self-chosen free name—can’t rest easy, knowing that her people continue to endure doomed lives as slaves. Ignoring the protests of William Still (Leslie Odom Jr. of “Hamilton”), who leads an organization that helps escaped slaves, and Marie Buchanon (a dazzling Janelle Monáe), an entrepreneur who owns and runs the Philadelphia boarding house she moves into, Harriet embarks on an endless string of round-trip journeys down to the South, assuming a disguise and the nickname “Moses,” rescuing more and more slaves with each miraculous expedition.

For the most part, Lemmons keeps things straightforward and engaging as Harriet faces the perils of her nighttime, on-foot trips head-on, always under the threat of Gideon and the initially villainous yet later-on protective watchful eye of Walter (Henry Hunter Hall, memorable and chameleon-esque), a slave hunter taken by Tubman’s determination and unique connection to God. Meanwhile zippy and truly moving montage sequences of various escape scenes mixed with occasional scares when Harriet gets stopped and searched by white officials elevate the pull of a package that is admittedly more standard issue than innovative. But given this is the first major film tackling such a vital figure of American civil rights history, that simplicity is not necessarily a bad thing. Neither is Lemmons’ choice to keep the bloody brutality in check on screen, prioritizing an inspirational and womanly character study. While the heartbreaking truths in “Harriet” feel somewhat glossed over in that sense (especially compared to that of Steve McQueen’s unforgiving “12 Years A Slave”), the reach of Lemmons’ film might be demographically broader, speaking to even younger audiences thanks to this visual palliating.

But beyond these strategic storytelling decisions, Lemmons’ greatest asset here is undoubtedly the tough-as-nails performance at the heart of her film. Erivo captures Tubman’s shining spirit and courage with compassion, beautifully reflecting her bravery on a toughened face she wears with pride. It’s thanks to her reflective commitment that the occasional wooden dialogue of “Harriet” flows with grace and the sporadic visual misfortunes don’t linger in one’s mind for too long. This might not be the optimal film to tribute an American hero who’s long been neglected on our screens, but Erivo’s performance might very well become a definitive one, synonymous with Tubman. And that’s not a bad place to start by any measure. 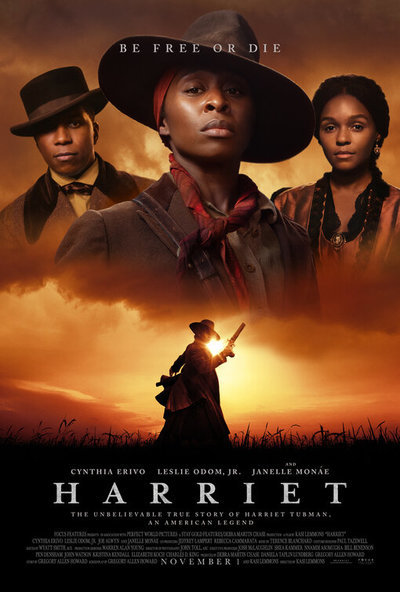