A truly momentous achievement that will be analyzed and discussed for years to come, Barry Jenkins’ “The Underground Railroad” is much more than a history lesson. It avoids the traps of period dramas in unexpected ways, alternating lyrical passages of magical realism with brutal reminders of the wounds inflicted by the history of slavery. It is harrowing, beautiful, moving, terrifying, and somehow both deeply genuine and poetic at the same time. That’s one of Jenkins’ most remarkable gifts, an ability to find the grace and the poetry in the realistic, blending the two in his art. After “Moonlight” and “If Beale Street Could Talk,” he has taken on his most challenging production yet and delivered a major event in the history of television, something that won’t be an easy watch for Amazon Prime subscribers this summer but demands to be admired and studied.

Based on the 2016 Pulitzer Prize-winning novel by Colson Whitehead, “The Underground Railroad” is a story divided into ten chapters, but not in a traditional episodic manner. Some of the chapters are nearly feature-length, and could be analyzed and appreciated on their own, not unlike something like “The Dekalog” or “Small Axe.” Jenkins has been given complete freedom in terms of structure with episodes running as long as 77 minutes and the shortest coming in just under 20 minutes, more than half of which has no dialogue. The very structure of “The Underground Railroad” speaks to Jenkins’ ambition, one that somehow feels both episodic in that any of the ten chapters could be deconstructed on their own and often have standalone stories but the project gains its strength when seen as a comprehensive whole. Having said that, I would not advise viewers to binge watch this series in a weekend and think Amazon would have been wiser to release episodes weekly, allowing each of them to be absorbed in a way that binging doesn’t do. This is an experience that shouldn't be rushed.

“The Underground Railroad” is the story of Cora (Thuso Mbedu), a slave on a Georgia plantation in the mid-1800s who escapes with another slave named Caesar (Aaron Pierre) and finds her way to the Underground Railroad, reimagined here as an actual rail system complete with conductors, engineers, and trains. In the premiere, Cora is told that she will see America as she looks out the window of the train, and the arc of the series fulfills that in a sense as she's taken across the country, first to a community that seems safer but harbors dark secrets and through the heartland of the nation in a way that makes her confront her past and future. A vicious slave catcher named Ridgeway (Joel Edgerton) tracks her, but “The Underground Railroad” is more than a mere chase story. The overall arc of Cora’s narrative ebbs and flows through viciously realistic violence and into more dreamlike fantasies and back again.

Every performance resonates in “The Underground Railroad” but it’s Mbedu who's asked to carry most of the production, and she delivers. It’s a very subtle performance that grows in strength, and it was smart to cast newcomers as Cora and Caesar. (Pierre is excellent too.) Jenkins has such an eye for young Black talent, as evidenced by his ensembles in “Moonlight” and “Beale Street.” That hasn’t changed. He also directs more familiar faces like Peter Mullan, Damon Herriman, and William Jackson Harper to fantastic supporting performances, and gets the best work yet in the underrated career of Joel Edgerton, who deftly avoids humanizing a monster too much and yet makes him feel three-dimensional at the same time.

In terms of craft, Jenkins collaborates again with his regular composer Nicholas Britell and cinematographer James Laxton, and both are essential to the success of this project, along with one of the best sound designs in the history of television. The crackling fire of a forest in episode five, the deafening crickets at night, the churn of a train engine, the sounds of footsteps and whip cracks—I’ve rarely felt more immersed by a production's sound design, and yet those realistic sounds are offset against a beauty of a score by Britell that adds emotional texture to the veracity of the production. The composer plays with repeating themes as Cora repeatedly questions her freedom or what that word even means at this time in American history (or what it means now, for that matter). And Jenkins sparingly but effectively uses music as different as Outkast and "Clair De Lune," both of which made me gasp when they filtered in.

Visually, Jenkins and Laxton often use natural light like candles or lanterns (and seemed to find the “magic hour” just about every day of the shoot), and his camera brings these unforgettable faces to life as it gently moves back and forth—the production is sparsely edited in a way that adds to its mesmerizing power. Jenkins has always loved the human face, allowing his camera to capture its complexity and grace in ways that few filmmakers can match. It reveals his incredible empathy for the human condition that elevates his work so completely, never losing Cora or Caesar or even Ridgeway as people even against a backdrop that could have allowed them to merely become devices in a larger picture or symbols for the hateful past of this country.

There’s a quote early in “The Underground Railroad” that I jotted down because it felt like it sums up so many productions about the horrors of this era: “We can escape slavery and yet its scars will never fade.” What’s different here is that Jenkins isn’t just interrogating the violence that created the scars but asking us how we go on with the knowledge that their mark can never leave this country. It transforms a history of repression into a project that’s ultimately about expression. In episode eight, Cora is told that “The train is always leaving and you have not found your words.” Jenkins wants all the Coras of the world to find their words, to be heard equally in their expressions of their pain and their hope. Now it's up to you to listen.

Note: This week, Barry Jenkins released a companion piece called “The Gaze,” which can be watched below. It is a non-narrative companion that can be watched before or after—I would recommend after, but it works either as an overture or an epilogue. Jenkins words: “What flows here is non-narrative. There is no story told. Throughout production, we halted our filming many times for moments like these. Moments where … standing in the spaces our ancestors stood, we had the feeling of seeing them, truly seeing them and thus, we sought to capture and share that seeing with you.” 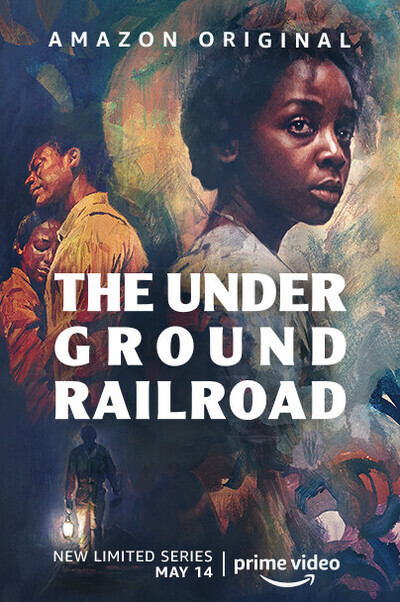