Pretty much everyone knows the old joke about Pagliacci, although I suppose these days more people know it via its recycling in “Watchmen” than any other source. Anyway, the joke, if you don’t know it, has a fellow going to see a doctor about his seemingly intractable sadness and melancholy. The doctor tells the patient he has good news: a great clown or comedian is in town. The patient should go see Pagliacci and, as the doctor advises in one version of the joke, “laugh yourself well.” At this advice the patient grows even more despondent. “But doctor,” he confesses, “I AM Pagliacci.”

“Dying Laughing,” a British-produced documentary directed by Lloyd Stanton and Paul Toogood, is a 90-minute variation of that old joke. It begins with Chris Rock declaiming that the only group of people in the world who say exactly what they want to say are stand-up comedians. And the rest of the movie is about the misery they have to endure in order to do that. An early appearance by Jerry Seinfeld will take the inside-baseball-inclined back to “Comedian,” the 2002 documentary in which the spectacularly successful performer goes back to his comedy-basement roots and experiences the exact same anxieties as he did when he was a nobody honing his craft. At this point, one fears a reprise of that film. Then Jerry Lewis appears, and one worries that the old fellow may lash out at his interviewers. The footage of the comics, shot in black-and-white, alternates with color footage of empty nightclubs and backstage areas of theaters; one has the notion that an alternate narrative is developing in parallel with the comedians’ observations. Yes and no.

Once the movie hits its true stride it’s really fascinating. At least it is if you have an interest in its subject, which I think maybe you should, since the compulsion to stand on a stage and seek approval by telling jokes is one of the most potentially masochistic in the entire human condition. What keeps the movie percolating is the fact that for as many horror and war stories as the comedians tell, there aren’t any lapses into tedious self-pity. These are comedians, after all. They want to milk laughs from skeevy motel rooms and the loneliness therein. They’ve learned that honesty is the best policy and get off on nothing more than telling on themselves. Even when they’re bitching about an injustice of the profession they can’t resist a good line. “You never see a heckler at a TED Talk,” one comic grouses, and I thought, “yeah that’s true—GOOD OBSERVATIONAL HUMOR,” and also, “Damn, somebody SHOULD heckle a TED Talk.”

Another thing the movie has going for it is a huge number of comics. It’s almost unbelievable how many are in here. I was counting at the end credits, in which the comics are thanked in alphabetical order, and there were more than two dozen before the list got to the “E”s. Seinfeld, Amy Schumer, Sarah Silverman, and the late Garry Shandling are among the Esses. And there are comedians acknowledged who don’t even make it into the movie—this is likely to be a good DVD in the extras department. And unlike a lot of other prior pictures about comedy and comedians, this is not a movie about a white boys club. Royale Watkins, Tiffany Haddish, Omid Djalili, and many more female comics and comics of color contribute. Watkins has one of the most overtly emotional stories to tell, of bombing while a group of his idols looked on from the sidelines of the stage. (Bombing, the comic George Wallace declares later, “hurts more than going to your mother’s funeral.”) It might not be accurate to say this movie features every significant living comedian with the exceptions of Louis C.K. and Eddie Murphy, but it sure feels that way.

Near the end of the movie, Shandling reappears to say that his advice to young comics is to “make sure it’s a calling. It’s too painful and too difficult if it’s not a calling.” British comedian Sean Lock observes, “This is the danger of talking about it, you sound like a wanker.” Early into the movie some skeptics might consider hauling out the world’s tiniest violin for these characters, some of whom have become very successful (Jamie Foxx admits that he can shrug off, to a certain extent, the rejections of the past because “I got money”). By the end, nobody has come off like a wanker. 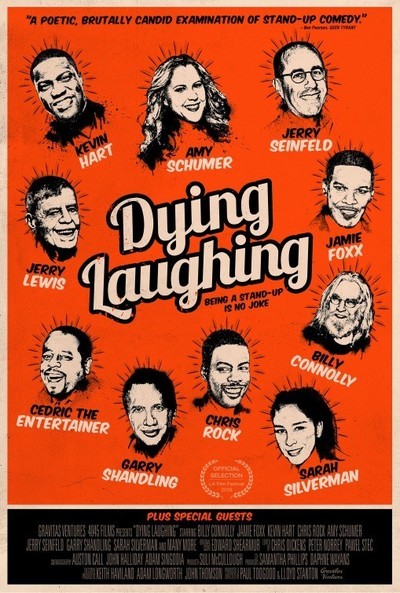 Amy Schumer as Herself

Sarah Silverman as Herself

Jamie Foxx as Himself

Chris Rock as Himself

Faizon Love as Himself

Billy Connolly as Himself

Jerry Seinfeld as Himself

Steve Coogan as Himself

Jerry Lewis as Himself

Eddie Izzard as Himself

Mike Epps as Himself

Sandra Bernhard as Herself

Keenen Ivory Wayans as Himself

Cedric The Entertainer as Himself

Rick Overton as Himself

Garry Shandling as Himself

Jim Jefferies as Himself

Bobby Lee as Himself

Tommy Davidson as Himself

Dave Attell as Himself

Allan Havey as Himself

Omid Djalili as Himself

Russell Peters as Himself

Tiffany Haddish as Herself

D. L. Hughley as Himself

Kevin Christy as Himself

Kirk Fox as Himself

Cocoa Brown as Herself

Paul Provenza as Himself

Neal Brennan as Himself

Stephen Kramer Glickman as Himself

Lee Mack as Himself

Stephen K. Amos as Himself

Frankie Boyle as Himself