Every movie, even a remake, deserves to be viewed on its own merits. But that’s easier stated than done when you have a film like “Downhill,” a largely inferior American knockoff that's far less dynamic than the 2014 dark comedy it's based on.

Not that this project didn’t come together with some inspiration, starting with the first time that Will Ferrell and Julia Louis-Dreyfus have worked together. And then there’s the writing/directing duo—Jim Rash and Nat Faxon, who previously made a family summer comedy to remember with “The Way Way Back,” working with “Succession” writer Jesse Armstrong. With all of this talent on hand, it’s a let down to see them soften the edges in this depiction of a marriage dealing with disaster, and then try to make it familiar with some cheap comedy.

The premise for “Downhill” takes after Ruben Östlund’s “Force Majeure,” which was about a family on a ski vacation that turned into a make-or-break point between a checked-out husband and worn-down wife. After scenes of getting acclimated to their adult Austrian resort and some time on the slopes, Billie (Julia-Louis Dreyfus), her husband Pete (Will Ferrell) and their two sons decide to grab lunch on an elevated patio. But their mountainous, picturesque background turns dangerous when controlled explosions set off an avalanche that careens right toward everyone on the patio. As the snow crashes down toward them, Pete chooses his cell phone and himself, darting away from the table as Billie holds onto her sons for dear life.

When Pete returns, he orders soup as if nothing happened, as if he didn’t just leave them behind. In one of the film’s few glimmers from Louis-Dreyfus’ performance, she tries to swallow the shock from such a betrayal, her trembling hand over her mouth before resuming lunch herself.

The avalanche incident hangs over Billie and Pete for the rest of the trip, and tension mounts as Pete shows more of his cowardly, selfish true self. When Pete invites visiting work friend Zach (Zach Woods) and his wife Rosie (Zoe Chao) to come over for drinks (without giving Billie proper notice), Pete continues to deny the event, and tries to use ski boots as proof that he didn’t run away. And when Billie and Pete go to an icy hotel figurehead (Kristofer Hivju) to complain about the dangerous explosion, Pete fails to support her—especially when it’s revealed that he initially saw signs warning about the explosion, and just didn’t think to say anything about it.

A major void in the comedy and the drama of the story is in how “Downhill” uses its cast. For Ferrell, this is where a movie that took more advantage of his talents could have excelled, and instead it casts him so that you always see his man-child characters of the past. We don’t get the sense that we’re watching one man’s maturity set-back—even with a detail about his father passing away eight months ago—so much as that he’s always been like this, and needs to learn one way or another that you can’t coast through the family roles you’ve signed up for. And the comedy goes even further in highlighting his goofy quality, as his few overtly funny scenes prefer to have him acting like the most immature of the three males of the family, or falling over at a bar drunk like it’s Frank the Tank from “Old School” acting out against domestication. It’s not even good Ferrell-style hijinks.

Thankfully, Louis-Dreyfus is given richer material, as she goes from visibly disturbed to quietly disgusted. She experiences her own understanding that she deserves better than Pete’s inaction, and has some cutting bits of dialogue whenever Pete tries to deflect or deny what happened. And in one of the story’s mildly amusing scenes, she asserts her autonomy during her time with tempting ski instructor Gugliemo. Her actions are surprising, and also make her character more interesting than her sourpuss husband. The scene leaves you wishing that if the story was going more for dysfunctional vacation comedy, that Louis-Dreyfus could have gotten the chance for similar laughs.

“Downhill” watches Billie and Pete grow farther and farther apart, with Pete failing to admit a shame that Ferrell sometimes hints at with a boyish frown. Rash, Faxon, and Armstrong eventually bring their couple to a grand finale of sorts, and it’s not only stunningly abrupt but an undermining of its all-star talent's emotional potential. It’s yet another instance in which it’s hard to not think about what could have been, especially since the original did it so much better.

This review was filed from the 2020 Sundance Film Festival on January 30th. 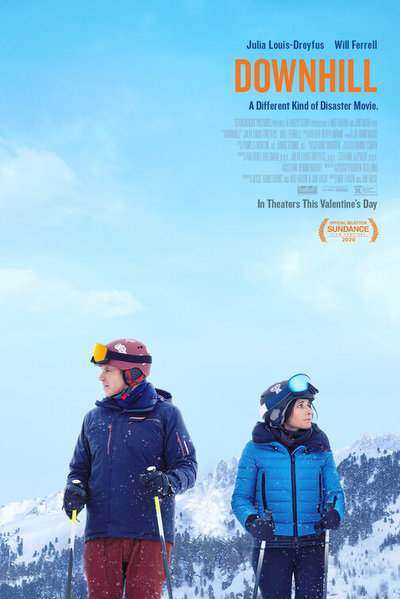 Will Ferrell as Pete