Every lamp and ladylike cocktail dress, every convertible and clink of a martini glass is a perfect reflection of retro chic in Olivia Wilde’s “Don’t Worry Darling.”

Who wouldn’t want to live in the suburban Shangri-la of Victory, with its minimalist, mid-century modern homes and bawdy, booze-soaked dinner parties? Young, attractive families find their every want and need fulfilled under the idyllic shimmer of the Southern California sun.

But something’s not quite right here. That much is clear to us early on, and that nagging suspicion increasingly gnaws at Florence Pugh’s perky party girl, Alice. Sure, shopping all afternoon with her fellow housewives is fun, as is having her handsome husband, Jack, come home from a long day at work and service her on the dining room table before he’s even taken a bite of the roast and mashed potatoes. (We’ll come back to Harry Styles, and his many talents and challenges, in a bit.)

The revelation of what that something is, though, results in such a shrug of annoyance and disappointment that it very nearly ruins the entire experience in retrospect. I may have groaned audibly, “Ugh, really? That’s it?” at a recent press screening. Discovering what’s actually going on raises more questions than it answers, and it shines a harsh light on the half-baked notions in the script from Katie Silberman. She also wrote Wilde’s directorial debut, the delightfully raunchy comedy “Booksmart,” which had a focus and an emotional authenticity that are lacking in this thriller.

“Don’t Worry Darling” aims to explore the tyranny of the patriarchy, disguised as domestic bliss. This is not a new idea, but then again, there aren’t many new ideas here. You can see the various pieces being pulled together from better source material—a bit of “The Stepford Wives,” a whole lot of “Mad Men,” and a bunch of movies that would serve as spoilers to list them. Watching Pugh once again function as the clear-eyed voice of reason—and watching her get gaslit when she tries to warn everyone about the sinister undercurrents within a joyful setting—also brings to mind her visceral work in “Midsommar,” one of the key performances that signaled to the world she’s one of the finest young actresses of her generation. When will people finally learn to listen to Florence Pugh???

She is indeed a powerhouse, which makes it that much more glaringly obvious that Styles was not yet ready for this assignment. As an actor, he’s a terrific pop star. Granted, his character is meant to be empty and pretty, and he definitely looks the part with his slim suits and sleek, angular features. The camera loves him. But when it comes time for him to summon the emotional depth he needs for his more intense scenes opposite Pugh, he’s distractingly outmatched. (Interestingly, Shia LaBeouf was first cast in the role, but it’s hard to imagine him here as the earnest, young company man on the rise. His presence is too forceful, too unsettling.)

Styles’ appeal at least fits the premise of “Don’t Worry Darling,” in which a select group of forward-thinking families has moved to a planned Palm Springs community to create their own society in the mid-1950s. “It’s a different way. A better way,” Gemma Chan’s glamorous Shelley assures her guests at one of the movie’s many soirees. Her husband is the town’s founder, Frank, and he’s played with the devious purr of a self-satisfied cult leader by Chris Pine.

Every day is the same, and that’s meant to be the allure. The men leave for work in the morning, lunchboxes in hand, on the way to top-secret jobs at the Victory Project, which they can’t discuss with their wives. The wives, meanwhile, send them off with a kiss before embarking on a day of vacuuming and bathtub scrubbing, then perhaps a dance class, and definitely some day drinking. Wilde herself plays Alice’s next-door neighbor and best friend, Bunny, with cat-eye makeup and a conspiratorial grin. She brings some enjoyable swagger and humor to this increasingly creepy world.

But little by little, Alice begins to question her reality. Her anxiety evolves from jittery paranoia to legitimate terror the more she discovers about this place, and Pugh makes it all palpable. Images come to her in impressionistic wisps and nightmares that startle her awake in the dark. In time, Wilde relies too heavily on these visuals: black-and-white clips of Busby Berkeley-style dancers, or close-ups of eyeballs. They grow repetitive and wearying rather than disturbing. The heavy-handed score from John Powell becomes more insistent and plodding, telling us how to feel at every turn. Whatever you’re thinking might be at play here, it’s probably more imaginative than what it turns out to be.

Once Alice finds the courage to confront Frank about her suspicions, though, it results in the film’s most powerful scene. Pugh and Pine verbally circle and jab at each other. Their chemistry crackles. Each is the other’s equal in terms of precision and technique. Finally, there’s real tension. More of this, please.

What’s ironic is that Frank and Shelley’s mantra for their worshipful citizens is one of control: the importance of keeping chaos at bay, of maintaining symmetry and unity, of living and working as one. But as “Don’t Worry Darling” reaches its climactic and unintentionally hilarious conclusion, Wilde loses her grasp on the material. The pacing is a little erratic throughout, but she rushes to uncover the ultimate mystery with a massive exposition dump that’s both dizzying and perplexing.

The craft on display is impeccable, though, from the gleaming cinematography from Matthew Libatique (Darren Aronofsky’s usual collaborator) to the flawless production design from Katie Byron to the to-die-for costumes from Arianne Phillips. The excellent work of all those behind-the-scenes folks and others at least makes “Don’t Worry Darling” consistently watchable, all the way up to its non-ending of an ending. Let’s just say you’ll have questions afterward, and those post-movie conversations will probably be more thoughtful and stimulating than the movie itself. 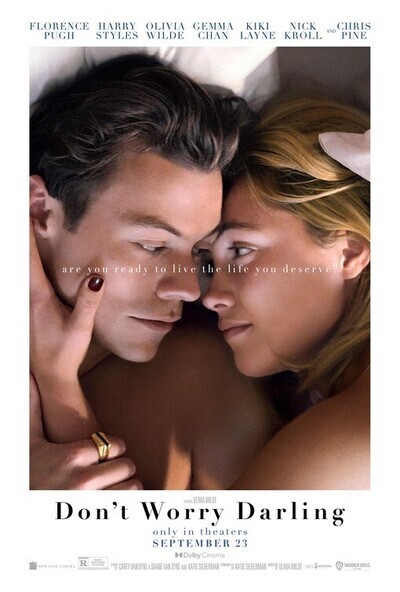