“Domino,” the latest thriller from Brian De Palma, arrives in theaters and on VOD this week under the kind of cloud that would cause even the director’s most passionate devotees to look upon it with suspicion. Shot in Denmark a couple of years ago, the film reportedly ran into financing problems during its production, and there have been rumors that the 89-minute film was heavily edited in post-production. And yet, while the end result is certainly no masterpiece, it is still better than the average action potboiler and contains a couple of exhilarating set pieces that offer further proof—not that any is needed at this point—that De Palma remains one of the unquestioned masters of creating and executing moments of pure cinema.

Nikolaj Coster-Waldau stars as Christian, a Danish cop who, as the story opens, goes with his older partner, Lars (Soren Malling), to respond to an alleged domestic disturbance. They quickly catch the apparent perpetrator (Eriq Ebouaney) as he is trying to leave, but when Christian heads upstairs to investigate further, he realizes that he left his gun at home and is force to borrow Lars'. He quickly discovers evidence of much more than a domestic dispute but by the time he gets back to Lars, the man they caught has slipped his bonds, slit Lars’ throat and jumped out the window to escape via the rooftops. Christian gives chase but both plummet to the ground, and he thinks he sees a couple of strange men dragging the suspect away.

It turns out that the suspect is actually Ezra Tarzi, a Libyan who is in pursuit of ISIS leader Salah Al Din (Mohammed Azaay) in order to avenge the murder of his father. The people who nabbed Ezra at the scene turn out to be CIA and the agent in charge (Guy Pearce) forces Ezra to continue his pursuit of Al Din and do the dirty work that the US government is prevented from doing, going so far as to imprison his family to force him to comply. While Al Din and his comrades set off to wreak havoc via a brutal suicide attack that they plan to broadcast on the Internet, Ezra goes off in pursuit while he, in turn, is being followed by Christian, who has already been suspended from the force because of the misplaced gun. Meanwhile, another Danish cop named Alex (Carice van Houten) also has deeply personal reasons for wanting to bring down Lars’ killer.

The key problem with “Domino” is that the screenplay by Petter Skavlan never quite clicks together. Granted, one does not normally go to a Brian De Palma film for the airtight narratives, but this one, either by nature or by the result of unfortunate last-minute edits, just doesn’t work. The notion of the multiple pursuits is reasonably clever but not much is done with it—there are too many scenes that just start and stop so abruptly that they leave you wondering if you somehow missed something. The characters are also given only the most perfunctory bits of development and the ones that do stand out do so mostly because of the personalities of the actors: Ebouaney (who was a menacing presence in De Palma’s “Femme Fatale”) is fairly electrifying and Pearce is clearly having fun chewing the scenery as the CIA sleaze. On the other hand, van Houten can be a striking screen presence (as she showed in Paul Verhoeven’s “Black Book”) but is hampered here by a character who seems to have been the possible victim of the editing, while Coster-Waldau is bland as the largely ineffectual hero.

These are flaws, to be sure, and they might have indeed sunk many an ordinary movie. However, “Domino” is still a Brian De Palma film, and those who still thrill at the very sound of that phrase will find a lot to enjoy here. Many of the obsessions he has explored throughout his career are on display in "Domino," both dramatic (voyeurism, mistrust of authority, a fascination with technology and the various ways in which it can be manipulated) and cinematic (including split-diopter shots and gorgeous deployment of slow motion at key moments). Although the script is largely straight-faced throughout, there are a couple of moments of De Palma’s trademark dark humor, including a bit in which a character analyzes a brutal torture video to note all the cinematic techniques being deployed with the fervor of someone taking note of every frame of a new trailer for some upcoming blockbuster. And, of course, there are the big set pieces—including an early rooftop chase that provides thrills and a tip of the hat to “Vertigo,” a terrorist attack that Al Din directs from afar as if he was a filmmaker himself and a climactic confrontation at a bullfight in Spain that takes up much of the final third. In that last scene especially, cinematographer Jose Luis Alcaine (who has shot most of Pedro Almodovar’s films as well as De Palma’s “Passion”), editor Bill Pankow, and composer Pino Donaggio combine their considerable talents to create a thrilling display of sound and vision that distinguishes them from the largely forgettable CGI melanges that currently dominate the multiplex scene.

“Domino” is not a De Palma classic on the level of “Dressed to Kill” or “Blow Out,” and it doesn’t reach the heights of such recent masterworks as “Femme Fatale” or the absurdly overlooked “Passion.” However, though it may ultimately go down as second-tier De Palma, his second tier beats the hell out of the top-level efforts of most filmmakers. The great Howard Hawks once famously stated that “A good movie is three good scenes and no bad ones.” “Domino” certainly contains the requisite three good scenes and they are so good that I found it easy to forget, or at least forgive, the ones that do not quite work. This is not a great Brian De Palma film in the end, but its best moments will remind you of just how great he can be. 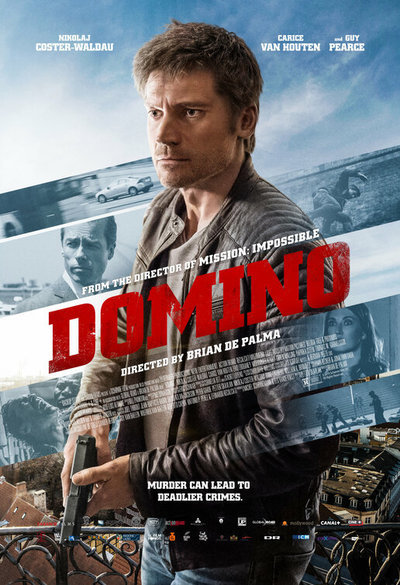 Rated R for strong violence, some language and brief nudity.