Die in a Gunfight

Not even sardonic narration from the usually delightful Billy Crudup can save the noisy mess that is “Die in a Gunfight.” And man, is there a lot of it.

Crudup’s voiceover smothers everything, early and often, explaining multiple details about the movie’s star-crossed lovers in ways that are overbearing and yet, ultimately, reveal nothing. That’s because there’s not a lot to these characters, which is clear after spending 90 minutes with them, which is something you won’t want to do.

Director Collin Schiffli’s film, from a script by Andrew Barrer and Gabriel Ferrari (who are credited among the many writers of “Ant-Man and the Wasp”), strains to be an edgy and profane take on “Romeo and Juliet,” albeit with the possibility of a happier—and bloodier—ending. Diego Boneta and Alexandra Daddario star as Ben and Mary, who are beautiful and rebellious but deadly dull. Both are the black sheep of wealthy families whose uptight patriarchs are longtime rivals in the film’s obviously Toronto-as-New-York-City setting. But as we learn from Crudup’s narration over a bright and brash opening animated sequence, these two have been on a collision course with each other from an early age.

Ben likes to pick fights—723 of them since he was 5 years old, all of which he’s lost: “Winning was never the point,” we’re told. Meanwhile, Mary’s been kicked out of every posh prep school in the city, prompting her parents to ship her off to boarding school in Paris, where they thought she’d get into ... less trouble? Seems unlikely, but whatever, the story needed an obstacle to keep these two apart. They fell in love as teenagers, and that was a problem.

So Mary’s dad (John Ralston) hired the creepy and intense Terrence (Justin Chatwin) to befriend and spy on her while she was abroad. (His name, along with those of all the major characters, appears on screen in giant block letters when they’re introduced, one of Schiffli’s many annoying, in-your-face stylistic touches. He’s also fond of random split screens.) Now that Mary has returned to Manhattan in her mid-20s, she finds herself stuck between her longings for the estranged Ben and her yearning to get as far away as she can from the clingy Terrence, whom her dad wants her to marry. Ben also wants to reconnect with Mary, despite—or perhaps because of—how disruptive this would be to their respective families. This is pretty much all “Die in a Gunfight” is about: It’s a love triangle in which you couldn’t possibly care less whether anyone gets together.

Schiffli’s snarky and snide self-aware tone quickly grows wearisome, and his action sequences have a cheapness about them that’s distancing; they’re almost laughable but never so-bad-they’re-good. His film is loaded with frenetic, incessant style in search of substance; it is a huge departure from the stark naturalism of his 2019 drama “All Creatures Here Below.” Meanwhile, the romance at its center—which in theory is meant to provide some sort of emotional core amid the shouting and the gunfire—has no spark. Boneta and Daddario share woefully little chemistry with each other, whether they’re getting reacquainted at a late-night diner or making out in the bedroom of Ben’s grungy-chic apartment. Their exchanges are strangely languid and devoid of any real passion. For a supposedly lifelong, forbidden love, they seem bored with each other.

A half-baked subplot involving an Australian assassin (Travis Fimmel) and his amorous girlfriend (Emmanuelle Chriqui) is a bit livelier—they’re swingers, so naughty!—but they feel more like a collection of quirks meant to shock us than real people. By the time Ben starts spouting banal platitudes about how he’s sick of waiting for his life to start, we’re more than ready for the movie to end. 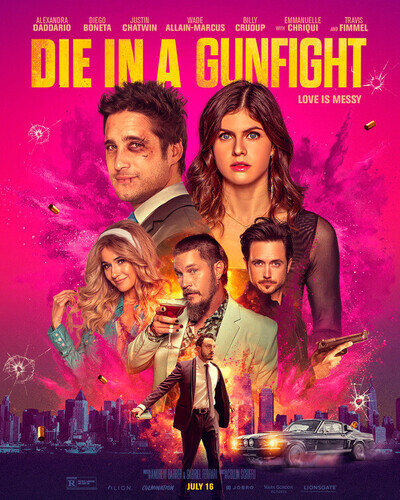 Rated R for violence, language and drug use.