All Creatures Here Below

"All Creatures Here Below," about a poor couple that goes on the run from the law after making a series of terrible mistakes, is a film where things go from bad to worse to even worse, then to so dire that you can't imagine how the characters will get out alive. The tone starts out bleak and steadily darkens. The movie is sometimes fascinating, though—particularly in the early stretches, before the dominos of catastrophe start to fall, and the little details of the characters' relationship and their world are replaced by a constant fear of getting arrested or killed.

The main couple, Ruby (Karen Gillan) and her boyfriend Gensan (David Dastmalchian, who also wrote the screenplay), have a convincing chemistry, even though they're playing characters so simpleminded that it takes a while to come to terms with the fact that there's no subtext in their conversations. Both the lovers and the audience are rarely asked to discern what either is "really" saying. They tend to say exactly what they're feeling, or what they want or need. And they often act on pure impulse, without contemplating consequences first. Like kids. (Their flight from authority is an elaborate, adult version of a child hiding under mom's bed after accidentally breaking something.)

Ruby works as a cleaning woman at a church, Gensan as a cook at a pizza restaurant that's part of a chain. Both quickly lose their jobs. Gensan gets laid off due to corporate restructuring. His boss (a gem of a supporting turn by David Koechner) tells him that the company is eliminating restaurant space and concentrating on pickup and delivery, because families can't afford to eat out in restaurants anymore. Ruby appears to be working as a church janitor in some kind of publicly funded workfare program (there's talk of vouchers), but she's told she can't do it anymore because she "keeps going where she's not supposed to," into the school portion of the facility where little kids are kept.

This is our first intimation that Ruby is obsessed with motherhood, thanks to a traumatic incident in her past that will ultimately be revealed to us. It's this trauma that leads Ruby to kidnap the infant child of a neighbor in their apartment complex. Gensan, meanwhile, is on his own track towards personal disintegration after betting his last paycheck on a cockfight (the script had previously established his affinity for gambling, via lottery tickets). He loses his winnings when the cockfighting ring's money-handler flees a police raid with Gensan's money and meets a bad end.

This all turns out to be a compressed prelude to the bulk of the film, a lean, slow road picture that follows Gensan and Ruby as they go on the run with the abducted baby girl in tow, heading towards Kansas City, Missouri. If the script and the direction (by Collin Schiffli) had a more finely tuned sense of irony, "All Creatures Here Below” might have been a towering addition to the sub genre of couple-on-the-run films, represented by the likes of "Bonnie and Clyde," "Badlands" and "True Romance," which put childlike adults front-and-center, had a streak of absurd or pitch-black comedy, and weren't afraid to dive headfirst into crime movie situations.

This one seems hesitant to do that, perhaps thinking that there's nothing funny about these characters or their world. There are times when it feels a bit too much like "Raising Arizona" reimagined as a depressed kitchen sink drama. These moments are leavened by a number of unnerving interactions between the lead characters, including a scene where Gensan catches Ruby trying to breastfeed the baby and realizes she knows less about this aspect of female biology than he does. But overall, this is exceptionally grim stuff. And I'm not convinced that it earns its Old Testament finale, which to me felt like a case of storytellers straining to land an emotional knockout punch.

The most original part of the movie is the opening 20 minutes, when we watch Gensan and Ruby struggle to survive on the seedy fringes of Los Angeles. This section feels like an American version of certain films by British directors like Mike Leigh and Ken Loach that are sincerely interested in the struggles of people who live from paycheck to paycheck. Ruby and Gensan exist adjacent to, but apart from, a Southern California dream factory, overseen by a handful of multibillion-dollar multinational entertainment corporations headquartered in glass towers, office parks and soundstages. (One of these is Disney, which employed both lead actors as part of the Marvel Cinematic Universe.) The gleaming skyscrapers of downtown Los Angeles loom out-of-focus in the backgrounds of shots, a reminder of a world of privileged people who rarely think about the workers who serve them.

If the movie had a bit more depth and a larger vision, it might've been wrenchingly powerful, but as is, it plays like a sincere and finely acted wallow in despair. Both lead actors spend large portions of the story trading anxious or aghast expressions. Bongani Mlambo's widescreen cinematography provides many Terrence Malick-like moments, including rack-focuses of waving fields of grass and flowers and shots of sunlight streaming through the canopies of forests, intimating that larger forces are at work here, however indifferent they may be to human suffering. There are hints of Flannery O'Connor's fiction as well, particularly in the character of Gensan, a combination holy fool and brute who knows just enough about the world to realize that he wishes he knew more.

But the overriding tone is dark-and-gritty indie drama, mixing numbed agony with incomprehension. The couple's inability to fathom the ramifications of the slow motion disaster they're involved in grows wearying because, after that first 20 minutes, the movie doesn't place it within any kind of larger social, political, or philosophical context. By the end, you're left with the scripted dramatic feature equivalent of a local TV news story that fills you with despair for the human race. 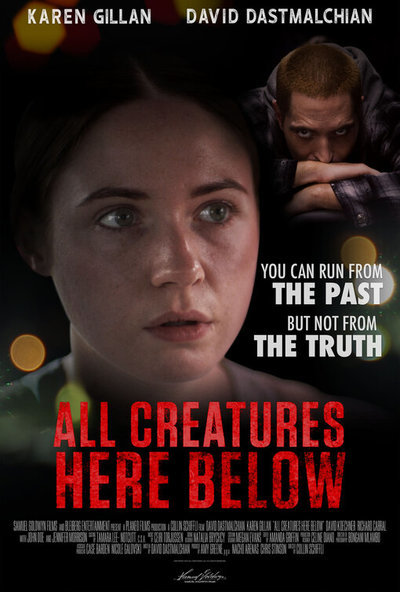