With its combination of vaguely European stylings, a storyline that effectively combines slapstick and sentiment and the scene-stealing antics of the gibberish-spouting sentient Twinkies known as the Minions, “Despicable Me” (2010) was a breath of reasonably fresh air in the crowded feature animation marketplace that went on to be a massive success throughout the world. The inevitable “Despicable Me 2” (2013) was an equally big hit from a financial standpoint but lacked the freshness of the original and the storyline was largely forgettable. And even though the Minions once again more or less stole the show, even they began to wear out their welcome a bit. That became especially obvious in the spin-off vehicle “Minions” (2015), a film that did little other than illustrate to youngsters the notion of there being too much of a good thing. Now comes “Despicable Me 3,” a depressingly rote piece of corporate product that has so little on its mind other than presumably making hundreds of millions of dollars that you half expect the ticket sellers to hand out copies of Comcast’s latest earnings report along with the 3-D glasses.

Having been inspired by his three adorable adopted daughters—Margo (Miranda Cosgrove), Edith (Dana Grier) and Agnes (Nev Scharrel)—to give up a life of super-villainy, Gru (Steve Carrell) is working as an agent for the Anti-Villainy League alongside new wife Lucy (Kristen Wiig). As the film opens, the two try to stop the fiendish Balthazar Bratt (Trey Parker), a former kid star from the 80’s seeking revenge on the world for cancelling his TV show (“Evil Bratt”), from stealing the world’s largest diamond with the aid of a robot sidekick, scientifically enhanced bubble gum and a keytar capable of playing the most familiar musical riffs of his favorite era. Although he saves the diamond, Gru lets Balthazar get away and as a result, the new head of the AVL (Jenny Slate in a strangely brief role) fires both him and Lucy. No sooner has Gru suffered this professional setback than his personal world is rocked as well when he is contacted by his heretofore-unknown twin brother Dru (also Carrell) and invited to meet him at his home on the faraway land of Freedonia. (If the name “Freedonia” rings any bells with you, consider that a potential signal that you might be just a little too old for this film.)

Gru and the family fly off to Freedonia and discover that Dru is fabulously wealthy and handsome. But just as the even-more-depressed Gru is about to leave, Dru confesses the real reason for summoning his brother—he wants his sibling to teach him the tricks of the super-villain trade so that he can also carry on in the family tradition. Gru refuses at first but since Balthazar has managed to steal that diamond in the interim, he figures that if he can break into Bratt’s lair—an isolated compound topped by a giant Rubik’s Cube—and steal it back, he and Lucy will be reinstated in the AVL. While the two brothers bond and plan their heist—complicated slightly by Dru’s incompetency at even the rudiments of being a villain—the others have their own mini-adventures as well—Lucy struggles to find her way into her new role as the mother to Gru’s daughters, little Agnes becomes obsessed with the notion of finding and adopting her very own unicorn and 12-year-old Margo, in an especially weird turn, takes pity on a boy during a weird cheese-related dance ritual and apparently finds herself engaged to him as a result. As for the Minions, they all abandon Gru early on when he refuses to return to being a villain after getting fired and go on a series of misadventures that land them in prison and on a televised talent show, where they perform what is easily the strangest version of the Gilbert & Sullivan show-stopper “I Am the Very Model of a Modern Major-General” to turn up in a movie since the release of “The Pirate Movie.”

Although the “Despicable Me” movies have tried to appeal to viewers of all ages, they are aimed primarily at the younger set—how else to explain the presence of two fart jokes in the opening title card? The problem here is that the filmmakers seem to have gone out of their way to concoct a story out of elements that will hold little appeal to that target audience. It is highly doubtful they will care about Gru’s worries about the loss of his job, his attempts to bond with his long-lost brother, Lucy’s attempts to be a good mom or Margo’s accidental engagement. Moreover, the whole Balthazar character is liable to baffle and confuse them more than anything else since he is a joke inspired by popular culture trends of an era long before they were even born. Meanwhile, their beloved Minions are so disconnected from the main proceedings that they could have been eliminated entirely from the film without affecting things in the slightest. Perhaps the producers were trying to skew a little older on the basis that the kids who embraced the original film are themselves older and more sophisticated. My guess is that if those particular viewers are going to the movies this weekend, they would be more inclined to try to slip into “Baby Driver” and leave this for their younger siblings.

For most of the people involved with the film, “Despicable Me 3” is a payday pure and simple and have responded accordingly. Carrell’s Gru, who seems to consist of equal parts Bela Lugosi and Tommy Wiseau, is still an amusing character but he doesn’t do anything new or interesting in his secondary turn as Dru. The other regulars show up and do their thing while regular supporting players like Julie Andrews and Steve Coogan appear just long enough to ensure future residual checks before disappearing entirely. (Apparently they couldn’t get Russell Brand back into the fold, though the way out that has been devised is kind of funny.) As for Trey Parker’s work as Balthazar, it is more disconcerting than anything else because whenever you hear his voice, you half expect him to go into full “South Park” mode, a move that would have left the PG rating in the dust but which certainly might have perked things up a bit.

Of course, all of these criticisms are fairly academic since “Despicable Me 3” is basically the closest thing to a sure thing at the box office, even in a season when most of the would-be sure things have been crapping out to one degree or another. Despite the problematic storytelling, little kids will probably still like it because it is colorful and noisy and filled with silly slapstick, though my bet is that they won’t embrace it to the degree that they did the original. As for parents and guardians charged with accompanying the tykes, it will keep the kids occupied for 90 minutes and they can at least enjoy the 80s-era hits on the soundtrack (with the Madonna classic “Into the Groove” getting the best play of the bunch) while waiting out the clock. Besides, it isn’t as if it will linger in their minds for too long since the whole enterprise is even more instantly forgettable than “Despicable Me 2,” which may be its only real accomplishment. 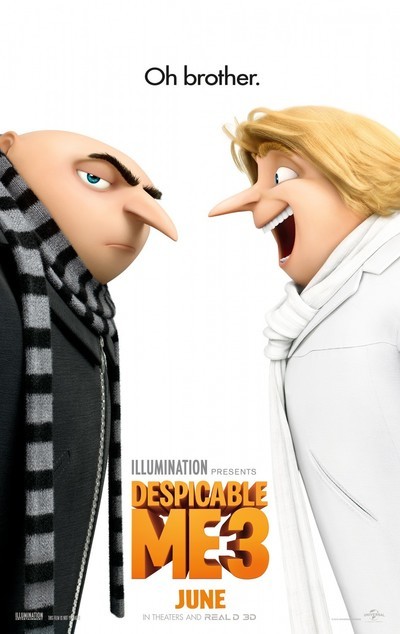