Look at that cast. How could that possibly go wrong? John Malkovich, Billy Bob Thornton, Michael Stuhlbarg, Bruce Dern and Oliver Platt are starring in a Coen-esque thriller about murder in a small town? Where do I get in line to buy a ticket? Sadly, “Cut Bank” is another piece of evidence that proves the case that filmmaking is not the sum of its parts. And while there’s some undeniably inherent joy in just seeing some of these great actors play off each other, the sum here is a shockingly dull affair, almost made more disappointing by the talent it wastes. It is also evidence in another film criticism case—the one that proves that the balance of crime and comedy that the Coens defined for so many copycats in films like “Fargo” and “No Country For Old Men” is significantly harder to pull off than some people think it looks.

Not a lot happens in Cut Bank, Montana, a small town with the claim to fame of being the coldest in the United States. In fact, experienced Sheriff Vogel (Malkovich) has never seen a murder. Of course, that’s about to change. Town hunk Dwayne McLaren (Liam Hemsworth) is filming his girlfriend Cassandra (Teresa Palmer) in their favorite spot in town when a car pulls up in the background and he captures a murder on tape. Town mailman Georgie Wits (Dern) has been killed. Or has he? And nothing matters more to town recluse Derby Milton (Stuhlbarg) other than the fact that a parcel he has been waiting on has gone missing with the mailman’s murder. He’ll do anything to get it back.

From the beginning, “Cut Bank” isn’t just tonally inconsistent, it doesn’t really have one. It’s flat. There’s no sense of rhythm, tension, or atmosphere. Thornton, in particular, sounds like he’s reciting lines he just learned, and Hemsworth is as flat as they come as the protagonist. He doesn’t respond to acts of violence like a normal human being would. There’s nothing organic here. And that makes for a giant vacuum in the middle of the piece since, technically, Dwayne is supposed to be the leading man, although it’s crystal clear that even director Matt Shakman and writer Roberto Patino are more interested in the rest of the colorful characters than dull Dwayne. To that end, there are scenes that work, such as Malkovich and Platt at the “best steakhouse in town” and an encounter between Stuhlbarg and an imposing Native-American that he thinks has his p-p-p-parcel.

What keeps sinking “Cut Bank” is that these moments of personality stand out against a field of gray. This film is lifeless, as if Shakman and Patino are going for deadpan comedy and only getting the dead part of it. Malkovich escapes the best, finding a bit of truth in the Tommy Lee Jones from “No Country” part as a small-town lawman depressed by the fact that he couldn’t keep violence from his life until its natural end. There’s an honest sadness in Malkovich’s performance that one doesn’t often see in thrillers, and it’s a moving, relatable human emotion on which to hold while watching “Cut Bank”. The problem is that it’s the only one. 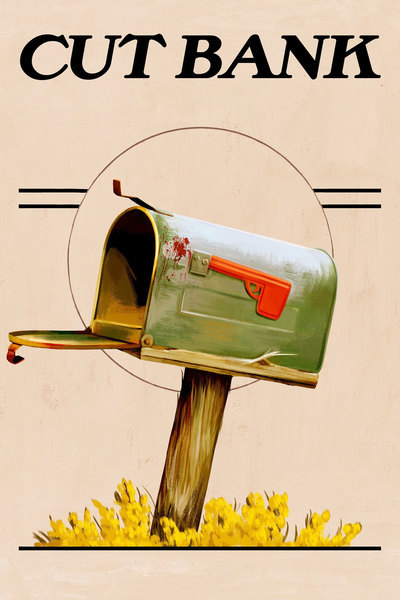