“Champs” is a documentary that wants to say something sociological about the sweet science of boxing. In this regard, it has an undeniable power; few non-fiction films on this subject filter boxing’s easily obtainable barbarity through the prism of class in America. Interview subjects point out that “nobody rich ever took up boxing,” and that “boxing is the American dream in its purest essence—you can go from bum to superstar overnight.” These are potentially fascinating and provable notions, yet “Champs” never fully coheres around either of them despite having details that would facilitate a more tightly executed treatise. It’s like a thesis whose next draft would be destined for greatness.

“Champs” divides most of its runtime between three boxers, two retired and one active. Mike Tyson and Evander Holyfield represent the retirees, two men who are inextricably linked not only by the heavyweight title but also by minor bouts of attempted cannibalism. Bernard Hopkins, whom viewers may know the least about, rounds out this trio of men who rose to fame from impoverished beginnings. This is a well-chosen group of subjects, men whose lives traverse roads so similar they evoke a great, tragic novel. Listening to their stories, one notes that while truth can be stranger than fiction, they are both slavishly devoted to the paths their creators have constructed from thin air.

The boxers’ stories are used as examples to highlight the sociological elements “Champs” seeks to discuss. So many past and present practitioners of pugilism stumbled upon their craft as a means of avoiding or escaping the seductive troubles their environments provided. As successful boxers get name-checked, the same life patterns emerge: poverty, the search for a father figure, joining a substitute family like a gang, the specter of constant violence and the curse of being a member of a race or group that was, as one talking head puts it, “the low man on the totem pole.” No matter which of these (or all of them) contributed to the boxer’s life, they somehow wound up at the neighborhood gym (or in Hopkins’ case, the prison gym). There, they discovered some grizzled old cuss who beat them into shape, sometimes literally, and gave them an outlet for their aggression.

In fleshing out the concept of boxing as the “purest example of the American dream,” it is noted how quickly one can go from rags to riches—and back to rags. All it takes is one good punch to turn somebody into an overnight sensation or dethrone an existing one. Just ask Buster Douglas, whose knockout of Tyson stunned boxing aficionados and gamblers alike. Or Holyfield, whose 1984 Olympic trial disqualification-slash-robbery did little to counter the stigma that boxing is the most corrupt sport of all the majors.

Corrupt or not, it is certainly the least regulated. An on-screen statistic shows how baseball, football and basketball have governing bodies that provide an all-encompassing set of rules. “Champs” brings out the head of the Nevada Boxing Association, and even he agrees on the lack of consistency across state boxing authorities. One of the great quotes spoken in the film refers to the “laissez-faire method of capitalism” that boxing represents: Hands off to everything but the money, and nobody cares if these poor boxers get hurt. Don King makes more than one appearance in footage, and someone points out that King walked the same harsh path to success many boxers did, often running over those boxers as they retraced their footsteps toward obscurity.

This film has a wide array of talking heads from different arenas. Spike Lee, 50 Cent and Mary J. Blige represent boxing enthusiasts. Denzel Washington and Mark Wahlberg chime in as actors who have played boxers. Ron Howard shows up presumably because he directed “Cinderella Man.” While Lee contributes by stating how every ethnic group had a moment to dominate boxing (usually at a time when that group was most hated or discriminated against), many of the celebrity talking heads feel out of place, underused or simply take up time better served by a deeper exploration of the film’s themes. For example, I wish Wahlberg and Washington had talked about the fighters they played, men whose circumstances line up with the film’s viewpoint.

Additionally, Marcus has this penchant for supplementing the already-compelling narrative by his three leads with recreated footage that comes off as cheesy, cable TV “Behind the Music”-style docudrama. Many times it competes with the riveting verbal storytelling, becoming an unwelcome intrusion by a filmmaker who had already held my interest.

“Champs” is at its best when Hopkins, Holyfield and Tyson speak their truths to us. Tyson, by virtue of being the most well-known (and a producer), gets the most screen time, though it is Hopkins’ story that provides the most compelling example of how “Champs” sees boxing. Hopkins’ trainer, Naazim Richardson, nearly upstages the stars—he’s Marcus’ secret weapon for dispensing profound statements and no-nonsense wisdom. Richardson’s summation on ‘hood survival is also the best explanation one could give for taking up boxing. It’s a great line, a dark comic beauty that is damn near poetry:

“You can turn the other cheek if you want to, but all they gonna do is just hit you in the head and take that earring too." 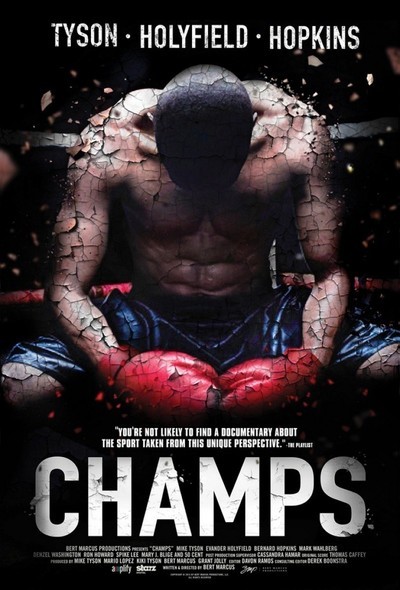 Mike Tyson as Himself

Evander Holyfield as Himself

Bernard Hopkins as Himself