Television has become an increasingly populated home for auteurs. Likely inspired by the success of "Twin Peaks: The Return" and stymied by the death of the mid-budget feature film, auteurs keep coming to mini-series TV, including Lars von Trier resuscitating his "The Kingdom Exodus" or Olivier Assayas delivering the masterful "Irma Vep." The incredibly divisive Nicolas Winding Refn has been here before, giving fans his indulgent and ridiculous "Too Old to Die Young" on Prime Video in 2019. The director of "Drive" and "Only God Forgives" jumps streaming giants over to Netflix this week with the six-episode "Copenhagen Cowboy," Refn's first Danish-language project since "Pusher 3" in 2005. It's a distinctly NWR project filled with fetishistic shots of violent men, an imposing score by Cliff Martinez, and an unusual hero in a tracksuit. While I've often been drawn to Refn's blinding confidence ("The Neon Demon" feels more underrated every year), he is spinning his wheels a great deal here. Just because an auteur can make a six-hour movie doesn't mean they should.

Angela Bundalovic gives a largely one-note (intentionally) performance as Miu, the stone-faced hero of this journey into the criminal underworld. She doesn't talk much, smile much, or do much. In fact, Refn is content for large chunks of "Copenhagen Cowboy" to merely linger on her unexpressive face as things happen around her. Her character expands as required later in the series by the story, but she's such a blank slate for so long that it drains any potential momentum. Refn and writers Sara Isabella Johnson, Johanne Algren, and Mona Masri even give the blue tracksuit-wearing heroine a bit of a supernatural tinge as she's introduced as a literal good luck charm purchased by a woman who wants to get pregnant and believes she has the power to make that happen. Other than a few fight scenes, Miu exists on a different plane from what's happening around her, a daring narrative choice but one that doesn't fit with Refn's style, which can already feel detached and is now even one step further removed from reality. It wouldn't be surprising if Miu just disappeared in a scene or shot lasers from her dead eyes because there's no internal monologue or reason to the character, which becomes a bit exhausting.

"Copenhagen Cowboy" opens with Miu being sold to the aforementioned woman who wants a child. She runs an underground brothel dominated by violence. Throughout Miu's adventures in the Copenhagen underworld, Refn comments on man's base instincts, often comparing them to animals. When an underling is beaten, the audio mix switches to pig sounds for his pained squeals. The father of a vicious killer can't stop talking about his prick, even asking Miu if he wants to see the "cultural asset" between his legs. There's a sense that "Copenhagen Cowboy" is Refn taking his macho male archetype hero and seeing what happens with a gender swap, but he doesn't dig far enough into that idea. Most of the ideas in "Copenhagen Cowboy" are underdeveloped, and Refn is repeating more than he is reinventing.

He's also repeating stylistically, washing "Copenhagen Cowboy" in bright neon blues and reds. Working with cinematographer Magnus Nordenhof Jonck, Refn takes a languid approach to visual storytelling, allowing his camera to slowly circle a largely empty room until it almost stumbles on a composition. Refn has reportedly revealed that the title has nothing to do with this weird, hollow show and that he just liked the sound of the two words he chose before he even started writing. That process seems to capture the depth of this entire project, one that plays with a lot of interesting elements but has so little fun doing so. 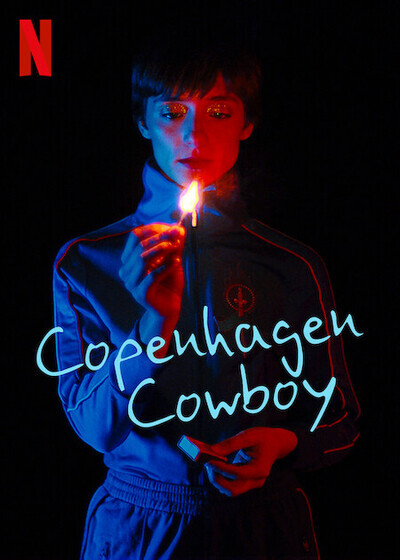