"You're My Dream" is the name of the song that concludes Danish writer/director Nicolas Winding Refn's dream-like midnight movie "Only God Forgives." That song title could just as easily be a question posed by Jesse (Elle Fanning), a neophyte fashion model and the lead protagonist of "The Neon Demon," Refn's latest provocation. Like "Only God Forgives," "The Neon Demon" follows a protagonist on the verge of being consumed by their dream. Jesse is the latest victim of her own hype, a vain but shy young woman who becomes convinced that she is alternatively as dangerous and as timid as others make her feel. Jesse never stops being a blank slate since she imagines she's more in control of her dark, un-romantic fairy tale narrative than she thinks. Unfortunately, while Refn ("Drive," "Bronson") is concerned with loss of control, and does accordingly present secondary characters as Jesse's funhouse mirror reflections, he loses his grip on viewers the farther he moves away from Jesse and her capricious desires.

Jesse has been told that she is a natural talent. She receives this praise cautiously, but earnestly. She wants to believe that she's good enough to be signed by a top fashion agency at the ripe age of 16. So she forges her parents' signature on a consent form, and allows herself to be pulled into a world ruled by haughty models, elusive designers, and mercurial photographers. Jesse never stops relying on other people, but her relationship with amateur photographer Dean (Karl Glusman) becomes rocky once she realizes that she is what everybody else dreams of being. "The Neon Demon" is, in that sense, about Jesse's struggle to transform from a timid beauty who dreams of the open night sky to a self-fashioned predator, one who recklessly burns bridges because she knows she is wanted.

Jesse's narrative is always half-realistic and half-dream-like in that it follows a character who is caught between two mindsets: accept the power and attention she receives as a sign of her own value or live in a seedy world where everybody tries to exploit each other. Even Dean, the most sympathetic character in the film, is a few career moves away from becoming as conceited as the acclaimed fashion designer (Alessandro Nivola) who callously puts down Jesse's peers for being just "fine," not amazing. Everybody wants something from Jesse, making it impossible for her to have a relationship that doesn't end tragically.

As "The Neon Demon" goes on, Jesse struggles to assert herself, making it a necessity for Dean, and concerned make-up artist Ruby (Jena Malone) to become more than just foils. Everybody in the film ultimately reflects Jesse's inner struggle, including Nivola's cartoonishly conceited artist, and Keanu Reeves's seedy motel owner. But the more control these characters take from Jesse, the less interesting they become. We see many variations on the same qualities—voracious desperation and insatiable hunger—expressed in Jesse's friends. But they're expressed through such overheated set pieces that it eventually becomes too easy to emotionally disengage from each successive, bloody dream-like sequence.

Having said that, "The Neon Demon" features several moments of startling beauty. Some memorable dialogue scenes and several dream sequences are the moments in which Refn most obviously wears his influences on his sleeves (Stanley Kubrick and David Lynch came to mind most often), but it's probably not coincidental that Jesse seems most lost in those scenes. Refn's captivation with the contours and expressions on Fanning's face comes to fruition in two runway sequences that are set in a futuristic night club that looks vaguely like a cross between "Tron" and "Under the Skin." Streaks of white light, mysterious pyramids, red strobes and a terrifying inky black background rule in these scenes. Several exchanges between Jesse and her fellow models are also potent despite Refn's pulpy, strained dialogue. Fanning makes Refn's otherwise passive victim/monster chimera look like a real person who happens to be an unreal projection. The scenes in which Jesse is the most submissive work best because they feel more direct, and perhaps more lived-in.

"The Neon Demon" only works when Refn finds the right middle ground between obliquely hinting at and explicitly spelling out what his movie's about. He constantly plumbs his id, and sometimes the results simply aren't interesting. As a result, "The Neon Demon" is often productively brash, even if it is ultimately more preposterous than it is satisfying. 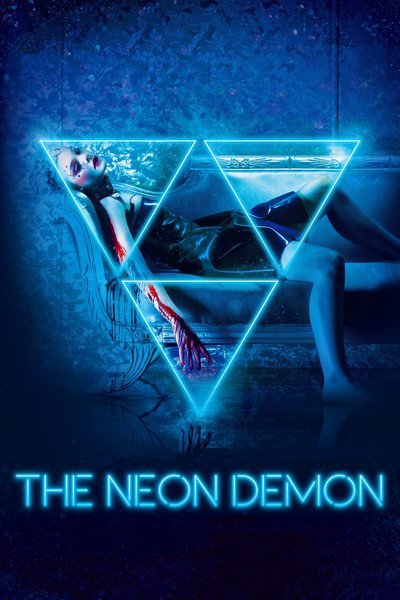