Danish director Nicolas Winding Refn's new film "Only God Forgives" comes across as that annoying friend we all had at college, who kept droning on about the beauty, grace, and honor of martial arts, all the while tending to his bloodied knuckles.  In a recent interview with our own Simon Abrams, Refn said, "Emotionally, our artistic expression consists of sex or violence. It all boils down to those two pure emotions that we have." Not only is this take on human relations unoriginal, it's also sophomoric and blatantly untrue. In "Only God Forgives," the director goes even further to suggest there is elegance to brutality. Tell that to the guy who just had his hands lopped off.

The film was shot in Bangkok, which the cinematographer Larry Smith has lit up like the inside of a Dutch whorehouse. The Thai capital's look is meant to evoke sleaze and corruption, yet it comes across, like the film itself, as affected and artificial. The film resembles Joel Schumacher's "8mm," which is not really a good thing. Refn and Smith might have been going for authentic urban disquiet, but the result is middle-of-the-road trash-can of manufactured, polished, execration.

Ryan Gosling plays Julian, whose dispassionate countenance and reticent demeanour make the actor's character from "Drive" seem positively loquacious. With his older brother Billy (Tom Burke), Julian runs a Muay Thai boxing club, actually a front for their drug smuggling operation, a definite case of putting the cart before the horse, as what we see of their narcotics venture is pedestrian at best. If Julian is the introspective kind, Billy is the opposite. His quest to find an underage prostitute comes to a savage end when he murders her. When the local police arrive at the scene, they are led by Chang (Vithaya Pansringarm), a Thai-Chinese detective whose literal-minded dedication to "an eye for an eye" leads to Billy's execution at the hands of his victim's father, as well as the subsequent amputation of the father's arm.

Enter Kristin Scott-Thomas as Crystal, Julian and Billy's ferocious and manipulative mother, who comes to town mourning the death of her first-born, and coaxes Julian to exact vengeance. Julian and Chang, who is known on the streets as the Angel of Death (wink wink), embark on their separate quests, each seeking the other, as bodies and body parts pile up in their wake. All of this is supposed to say something profound about the cyclical nature of violence and retribution. Instead, it's just strident and obvious.

Nicolas Winding Refn has stated that he wanted "Only God Forgives" to be a Western set in Bangkok, which is as good a pronouncement as any of the film's precious pomposity. Oedipal motifs are thrown around like confetti: Gasp as Crystal laments Billy's sizable phallus! Shiver as she calls Juian's date a phrase that rhymes with "mum dumpster"! Cringe when a character literalizes the Freudian desire to go back into the womb! The violence is complacent and less than cathartic. You've seen one "dismemberment as emasculation" metaphor, you've seen them all. These scenes are punctuated by incongruent moments of high camp, as Chang sings love ballads to his ever-decreasing platoon of subordinates at a karaoke bar. It's meant to be ironic. But it's just doggerel.

The acting is equally choppy (pardon the pun). Ryan Gosling is required to show emotion in exactly two scenes, surprise in one and anger in the other, but his performance is otherwise so monotonous that his outbursts work as clunky, unwelcome, and hilarious intrusions in the dream-like atmosphere of the film. As the ultimate anti-homemaker, hell-bent on obliterating anything in her degraded path, Kristin Scott Thomas resembles Tyler Perry's Madea more than Euripides' Medea. Vithaya Pansringarm moves like a drugged tortoise, his "Eastern" stoicism in contrast with the nimble use of his sword. Some might find him threatening; I found his natural expression to be rather avuncular.

Whereas Refn weaved a fairly straightforward narrative about a taciturn getaway driver in his previous film, "Drive," here he goes back to the more abstruse approach of his former European fare such as the "Pusher" trilogy or "Valhalla Rising." Reality, dreams, and visions are intertwined, leaving the audience confused as to what exactly is going on. The director has dedicated the film to the avant-garde filmmaker Alejandro Jodorowsky ("El Topo"), whose inspiration remains superficial at best. It's an overly directed film that strives for effect with each scene. You can almost feel Refn's elbow constantly nudging you as he whispers "Geddit?" into your ear.

If there is one small titbit of innovation and originality in the film, it is Cliff Martinez's ambient, mesmerizing, gorgeous score. One of the year's best, it belongs in a much more accomplished work. At one point during the film, a character says to the crowd: "Whatever happens, keep your eyes shut." When it comes to "Only God Forgives," that's good advice for us all. 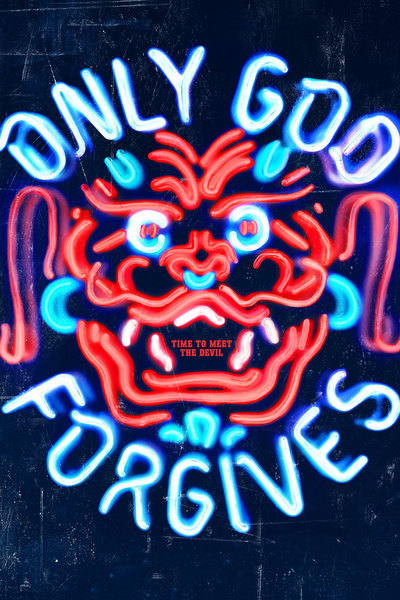