"Confetti" is a gentle story about a mother who will do anything to get help for her dyslexic daughter. The obstacles she faces are daunting. They live in China, where the schools make no accommodations for students who are "not normal." "The school only provides standardized education," an official explains. A visiting American teacher (George Christophe as Tommy) realizes that Mei Mei (the adorable Harmonie He) is dyslexic but exceptionally gifted. Determined to find a school that will make her daughter "normal," Lan (Zhu Zhu) who has been a janitor at the school that expelled Mei Mei, decides to bring her to America. "America is 36th in the world," the Chinese educator tells Lan dismissively. Mei Mei's classmates jeer as she leaves the school, reflecting the East/West cultural divide between prioritizing the group vs. the individual, and therefore making "normal" mean something very different, as explored by Gish Jen in her book, The Girl at the Baggage Claim.

Fans of 1980s films will enjoy seeing Amy Irving and Helen Slater as two of the people Lan and Mei Mei meet in New York. Irving plays Helen, a wheelchair-bound writer who agreed to take in Lan and Mei Mei but did not know that Lan spoke no English. She immediately tries to offload them onto someone else, but by the time another option is available, Helen has become caught up in their quest. Her increasing involvement in the effort to find a place for Mei Mei to get an education allows her to let go of the burden of grief that has lead to writer's block.

Slater plays Dr. Wurmer, the head of Horizon, an expensive private school that Lan and Helen believe is Mei Mei's last hope, after the public school, which bills itself as inclusive, is not able to find a way to help her. Horizon has an iron-clad two-year wait list. They will not consider an applicant without a $5000 neuro-psych evaluation to show that she can benefit from their program and, as impossible to get, a letter confirming Lan's off-the-books employment.

The story is told as a flashback, beginning with Helen's recorded plea to Dr. Wurmer. She says that "the world is one big web of stories," and the film comes to us in a series of titled chapters. We learn that the story is as much Lan's as it is Mei Mei's. Lan's insistence on finding a way to make Mei Mei "normal" has as much to do with her own life as it does her daughter's and with a secret she may not have kept as well as she thinks. Zhu's performance is a wonder throughout, her lovely face reflecting at the same time the crushing shame that holds her back and the fierce resolve that keeps her moving forward. Zhu's scenes with Yanan Li as her husband are tender and bittersweet, with a natural intimacy that feels like eavesdropping.

It is not just love for her daughter that propels Lan's efforts, but the possibility of getting herself a second chance. Tommy's explanation that dyslexia is like trying to use an American plug in an Asian outlet helps Lan understand her own struggles. Her realization that "normal" is not the goal is meaningful for herself and her daughter.

Writer/director Ann Hu, who based the film on her own experience, has a gift for subtle details that illuminate character and culture. The contrasting Chinese and American classrooms, the piles of books in Helen's New York apartment, the eye-glasses Lan does not need but wears to make her look more intellectual, help keep the film's world vibrant and engaging. If it all comes together too neatly, that is nothing less than Lan, Mei Mei, and Hu deserve. Beyond the story of Lin and Mei Mei or even of Hu, the film is a plea for every child to have the opportunity to learn. 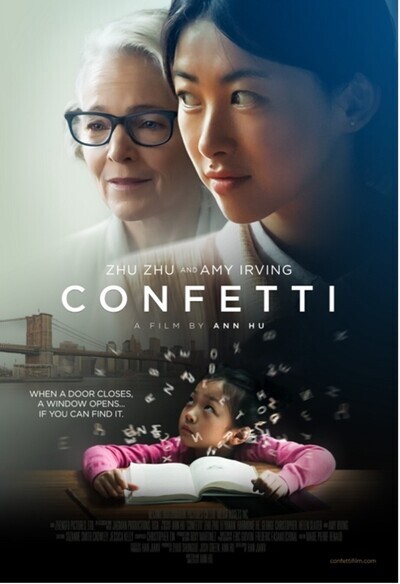 Harmonie He as MeiMei