"Cold Pursuit" is the 2019 version of a recently minted tradition, the late winter Liam Neeson revenge flick. It's one of the strangest, least predictable movies he's made in years, which isn't the same thing as saying it's consistently good. Based on the Norwegian movie "In Order of Disappearance," and directed by the same filmmaker, Hans Petter Moland, it's a fragmented, meandering tale in which Neeson's character, a Kehoe, Colorado snowplow driver named Nels Coxman, gets a taste of vengeance and becomes a glutton. At times it plays less like a self-contained movie than a couple of episodes of a TV series that don't quite add up the way you wanted them to. It's a shame that it isn't better. At its best, it plays like a wry critique of this unexpectedly lucrative period of Neeson's career, and a borderline-spoof of the genre as a whole.

"Cold Pursuit" kicks off with Nels accepting an award as Kehoe Citizen of the Year, then jumps ahead to the murder of his only son Kyle (Michael Richardson, Neeson's real-life son with the late Natasha Richardson), an airport baggage handler kidnapped and killed by members of a local drug cartel over a mishandled cocaine shipment. The killers made Kyle's death look like a heroin overdose even though the young man didn't do drugs, a touch that adds insult to injury. Nels swiftly dispatches the men directly responsible for his boy's murder, wraps their corpses in chicken wire, and dumps them off a waterfall so that they'll settle on the bottom of the Colorado River and be stripped clean by fish, an evidence-disposal technique that he later says that he learned by reading crime fiction. Unsatisfied by the deaths that he metes out early on, Nels resolves to work his way up the underworld's ladder until he slays the boss of bosses, Trevor "Viking" Calcote (Tom Bateman).

Complications ensue, and not necessarily the ones you'd expect from having watched other Liam Neeson revenge movies. Moland and his American screenwriter, Frank Baldwin, play around with Western movie motifs, photographing the snow-packed mountains, valleys and roads like panoramas in a John Ford cavalry picture, and envisioning a Cowboys-and-Indians-type rivalry between the white-run drug cartel that's responsible for Kyle's murder and a Southern Ute Indian gang that mistakenly gets blamed for Nels' retaliatory spree. There's also commentary on how outlaws lust after cliched signifiers of respectability. This is conveyed mostly through Viking, a divorced yuppie clotheshorse and preening psychopath who treats his own young son, Ryan (Nicholas Holmes), like a pet, or some kind of experiment in conditioning, micromanaging his diet and recommending "Lord of the Flies" as a self-help manual.

Like its source, this American remake is comparatively light on graphic violence (the beatings tend to be uglier than the shootings), and it has the confidence to handle quite a bit of that business offscreen, staging significant killings behind drawn curtains, or in the cut separating one scene from the next. The film also detours from the main story to spend quality time with Viking's drug gang, his henchmen (including Domenick Lombardozzi as the aforementioned fantasy football sentimentalist, who refers to Mozart as "Moe-zart"); Nels' ex-criminal brother Brock "Wingman" Coxman (William Forsyth), who got his nickname from "Top Gun"; a couple of Kehoe cops (Emily Rossum and John Doman) trying to make sense of the mayhem, and assorted mates and exes. Laura Dern has a few scenes as Nels' grieving wife Grace, who leaves Nels almost instantly, perhaps sensing that her presence would be wasted in a movie filled with sad, violent, self-involved men.

"Cold Pursuit" is at least four-fifths a dark comedy, filled with eccentric, often introverted and sad American archetypes. Most would be mesmerizing and/or hilarious if they had been fully fleshed out as characters, and if the film surrounding them were more elegantly structured and paced. The project suffers from a certain flatness in the characterizations, as well as from an inability to introduce new faces, or arrange meetings between established characters, when the plot needs them, as opposed to much later, when the audience is ready for the story to end and tends to view major new developments as narrative speed bumps.

But even at its most navel-gazing and disorganized, "Cold Pursuit" still showcases elements you haven't seen before, like the tight-lipped hero asking how many words he's required to speak at an awards dinner, the henchman who keeps losing at fantasy football because he's too loyal to his favorite childhood teams and players, and the Ute crime boss who's saddened by the appropriation of his people's clothes and jewelry by white designers—more so when he turns over a label and sees "Made in China."

The film might have been doomed to historical footnote status regardless, because it opened mere days after its star made one of the weirdest, most clueless unforced errors in the history of movie promotion. In an interview, Neeson tried to connect this film, and the futility of revenge in general, to an anecdote drawn from his twenties, when he responded to a white female friend's rape by a black assailant by wandering town around with a crowbar, hoping to get in a fight with another "black bastard" and kill him. Although Neeson didn't kill anyone back then, or even fight them, he flunked the present-day personal disclosure-as-advertising test by failing to realize that the racism part of his story—which he did not apologize for, or even note and explain—was as disturbing as the revenge part, which he condemned on the spot.

Ironically, it's precisely this kind of person who might've ended up as a supporting player in "Cold Pursuit," had the filmmakers been able to justify clearing space in an already-crowded ensemble. Throughout, revenge is treated not just as a disturbing and self-negating activity but sad and bleakly comical as well. The movie starts with a printed quote from Oscar Wilde ("Some cause happiness wherever they go, others whenever they go") that sounds like a condemnation of people you haven't met yet. Several of the main characters are obsessed with vengeance. Others are casually, even murderously racist. It's clear not only that revenge can never satisfy them, but that they are incapable of seeing their own flaws, and that their tribal myopia and obsessions with honor and vengeance are ways of distracting themselves from the bone-deep knowledge that they failed the same people whose bodies, or memories, they're hell-bent on defending. 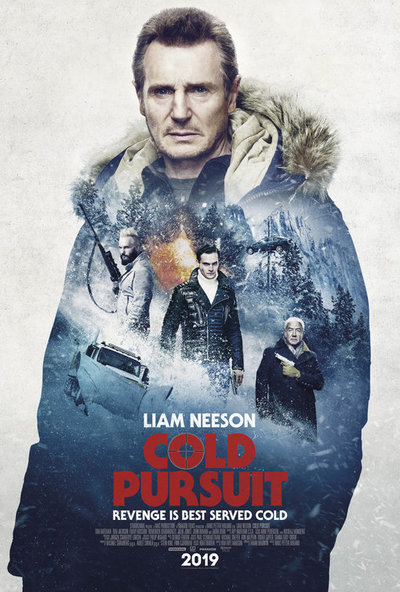 Writer (based on the movie 'Kraftidioten' wtitten by)