Noomi Rapace is the stoic center of "Close," a down-and-dirty thriller about bodyguards trying to prevent kidnappers from abducting an heiress. From the opening set piece showing Rapace's character, a private security expert named Sam, protecting journalists against rifle-wielding soldiers, to its many scenes of the character thwarting would-be killers with guns, fists, feet, and the knife strapped to her boot, it's clear that cowriter-director Vicky Jewson has conceived this project in the spirit of a no-nonsense, female-led bone-cruncher like "Haywire" or "Atomic Blonde"—movies whose heroines would drive cross-country alongside an crusty old Clint Eastwood character without a word passing between them, then tell friends it was the best vacation they ever had.

And then the movie decides to "humanize" her in the most obvious way possible, and suddenly it becomes less special. You'll know the moment when you see it. It doesn't merely answer a question you never would have asked in a film about a similarly strong-silent male character; it lifts the veil of mystery that made Sam so fascinating. There's nothing fresh about the story, which is essentially "Man on Fire" remade as "Woman on Fire." But there almost never is in action pictures. The genre is mainly about the director's visual style, the fights and stunts, and the performers' attitudes. "Close" is strong on all counts, until it seems to lose its nerve and decides to explain a character who—as written by Jewson and Rupert Whitaker, and as performed by Rapace—was more compelling when the film let her be a lethal question mark.

Despite that strategic misstep, this is a tight, tough film that gets right into the thriller part of the story and somehow manages to feel plausible even when Sam is mowing down foe after foe. The filmmaking splits the difference between Jason Bourne-style Cuisinart editing and the kind of lean stillness that you'll find in a fat-free Yakuza thriller like "Sonatine"—the kind where violence seems to erupt out of nowhere, and the hero survives by keeping his cool even as he's maiming and killing and setting things on fire. The director and her cinematographer, Malte Rosenfeld, see the geographical beauty in the landscapes that Sam and Zoe pass through, but they never linger on it. This choice feels right for a movie about a woman who enters each new space wondering where the exits are, and noting which ordinary household objects could be used as weapons.

From the minute the opening sequence ends and the film whisks us back to the first meeting between Sam and her client Zoe (Sophie Nelisse), Rapace holds the screen simply by appearing on it. This actress is no stranger to intensely physical roles; this is clearly one of the most demanding, but neither Rapace nor the movie make the character's prowess seem like anything other than the byproduct of good training and discipline. Sam is loosely based on bodyguard Jacquie Davis, whose high-profile clients include Nicole Kidman, J.K. Rowling, and the British royal family. Davis is an expert in surveillance and rescue operations, skills that come into play here, along with the ability to stab a man with your right hand while using your left to blind a second man with wasp spray.

When Sam starts guarding Zoe, she still has multiple, freshly-healed cuts on her face from the opening firefight, a touch that speaks to both the movie's (and the actress') disinterest in glamour. The script deftly defines her relationship with the teenager, a spoiled and depressed Paris Hilton-esque rich girl. She's still mourning the sudden death of her father, the CEO of the Hassine Mining Company, and hating her stepmother (Indira Varma), whose family started the company. Nobody around Zoe seems happy that she's suddenly become the majority stockholder in the company at a time when a Chinese rival was looking to merge with them. Situations like that tend to get resolved in stories like this via kidnapping, perhaps murder.

"You're not my mom," Zoe exclaims early in the movie, after Sam physically intervenes to prevent her from going home with a handsome young man grinding with her on a dance floor. Of course, by the end Sam kind of is her mom—that's how films like this work, and it's how we usually want them to work—but it's all about how you get there. "Close" is aces when it's watching its star move through the world, silently checking everyone and everything out, hiding her mental math until it's time to kill some dudes. The action is frenzied but comprehensible, brutal but not wantonly sadistic. It loses a little something when it decides to explain her, but the character and the performance remain fascinating, and the bones never stop snapping. 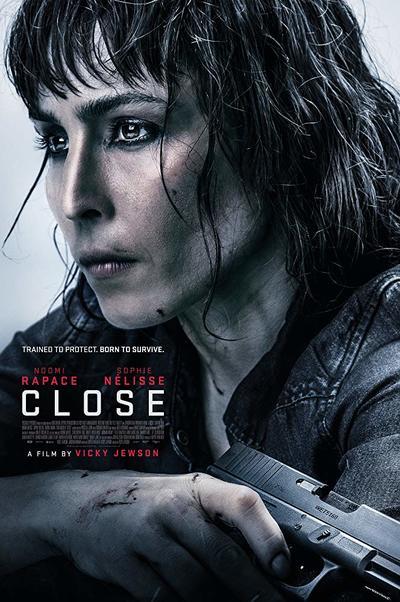 Christopher Sciueref as The Suit