“Chappaquiddick” can be summed up by one of the first sentences uttered by Edward “Ted” Kennedy (Aussie actor Jason Clarke) after escaping from a sunken car that he drove off a bridge into shallow water on July 18, 1969: “I’m not going to be president.” Never mind that he was right. At that point, there’s a more pressing issue at hand: A young female passenger named Mary Jo Kopechne is gasping for air and slowly expiring in the back seat of his vehicle. But in his privileged world, saving his own behind and preserving what’s left of the legacy of his family dynasty is his primary duty. He wouldn’t officially report the accident for another 10 hours or so, more than enough time for Kopechne to have been rescued according to authorities who arrived the next day.

The film, directed in unfussy workmanlike fashion by John Curran, acts as a reminder that cover-ups of misdeeds committed by those who are entrusted to govern our nation are nothing new. Money, power, lies and cronyism have regularly provided a safety net against taking accountability for one’s morally askew acts while in office that often leave behind an ugly wake of human collateral damage.

The script by first-timers Taylor Allen and Andrew Logan is satisfied to simply present the events and their aftermath as they occurred, with a flashback or two. But viewers will likely provide their own insights into the material, given the constant bombardment of ethical issues faced by those currently in charge. What with Playboy Playmates and adult film stars taking top billing in ongoing political scandals, such tabloid-ish reports of bad behavior are starting to sound more like the plot of one of Russ Meyer’s X-rated sex-capades. But for those who are drawn to re-creations of historical controversies that pack more gravitas and outright tragedy, “Chappaquiddick” could prove satisfying enough, especially with the in-vogue-again Kennedy clan at the center.

If you think the title of this fact-based drama looks like how a hunter’s duck call might sound, you are likely too young to recall when the last surviving son of Joe and Rose found himself in a whole heap of self-inflicted trouble. Given that he out-lived his three older brothers—Joe Jr. died in World War II while John and Robert became the targets of assassinations that rocked our country—one might expect this 37-year-old U.S. Senator from Massachusetts, who was prepared to make a bid for the Oval Office himself, would be more cautious about how he conducted himself in public. That Ted can’t even avoid hitting a buoy during a sailboat race, almost sending his two passengers into the ocean in his eagerness to win, suggests otherwise.

There has been salacious speculation for nearly a half-century about exactly what happened that summer night on a small island near Martha’s Vineyard when Ted, whose pregnant wife Joan was then on bedrest and would later miscarry, and five other married men held a reunion with six so-called “Boiler Room Girls.” The single young women, all in their 20s, worked on Bobby’s presidential campaign in a sweaty D.C. office space before he was killed in 1968. But Curran doesn’t share such specific details about the attendees. Drinking and dancing take place in a small cottage, but it’s no bacchanal. There are slight intimations that Ted and Mary Jo (a solid Kate Mara, with precious few scenes out of the water) might have had a personal tie before she takes her fateful steps into his Oldsmobile, but little else.

If cellphones had existed back then, one expects the outcome would have been much different. Instead, Ted “borrows” a rowboat and hightails it to the hotel where he is staying, relying on a phone booth to call his wily father with his bad news. Joe (capably captured by Bruce Dern), who requires a wheelchair, can barely breathe let alone speak after being partly paralyzed by a stroke. But he is able to croak out one important Rosebud-like word of advice: “Alibi.”

Luckily for Ted, this incident happened just two days before Apollo 11 would land on the moon and grab the lion’s share of headlines, pushing the titillating details of the accident off to the side. He at first tested out the lie that Mary Jo was driving, but eventually went the “I can’t remember” route with a doctor willing to claim he had suffered a concussion and shock. He ends up wearing a neck brace to Mary Jo’s funeral, basically fooling no one. Through it all, Ted shows little remorse or concern over the dead woman, preferring to strategize with his team to preserve his reputation. He ultimately pleaded guilty to leaving the scene of a crash that caused personal injury and received a two-year suspended sentence.

The role of Ted Kennedy is far from an easy one, especially for an actor from Down Under, given the necessary New England accent. As a character, he doesn’t possess the confident air and natural charisma of brothers John and Robert nor should he, especially given how he conducts himself in a time of grave crisis. But Clarke, who has skillfully brought other complex and compromised males to life in “Zero Dark Thirty” and “Mudbound,” is wholly convincing both physically and vocally as the surviving Kennedy brother. One wishes that the movie itself allowed him more performing room than it does.

Given all the films and docs dedicated to portraying the Kennedy mystique and misdeeds over the years, I did wonder why no one has done a film about “the girl in the car.” Sam Taylor-Johnson of “50 Shades of Grey” fame was originally slated to direct “Chappaquiddick.” Perhaps someday, she or another female filmmaker could pay long-overdue respects to Mary Jo, who gets short shrift here, by fully fleshing out her life story as well. 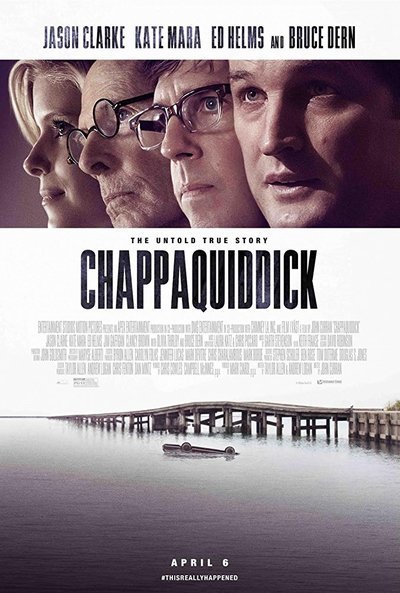