You know that "Chagall-Malevich" isn't going to be a typical biopic, or a typical feature film, or a typical anything, about ten minutes in, when its hero, Russian Jewish painter Marc Chagall (Leonid Bichevin), returns to his hometown of Vitebsk after years in Paris, and reunites with his sweetheart, Bella (Kristina Schneidermann). He showers his family in souvenirs, including photos of the City of Lights and some splendid women's hats, one of which he dons. Bella shows up on the front steps of his home and peers through the window; he returns her gaze, and there's a lovely closeup of his face and her reflected face almost overlapping. Then they go outside for a walk—Chagall still wearing that woman's hat, which is bedecked with an aquamarine feather—and kiss as the fall wind whips yellow and brown leaves around them. The camera follows the leaves into the sky, and suddenly we're floating over Vitebsk. Chagall and his love drift into the frame entwined, as in Chagall's 1918 painting "Over the Town."

It's not a hallucination or a dream sequence. The movie just suddenly turned into a Chagall painting.

Writer-director Alexander Mitta does this sort of thing all through "Chagall-Malevich." Sometimes he's paying tribute to specific paintings by Chagall or his academic and artistic rival, Kazimir Malevich (Anatoly Beliy), chief advocate of the abstract painting style known as Suprematism. Other times he's letting particular characteristics of the painters infiltrate his compositions, not in a way that necessarily foreshadows specific works—although there are times when you see a particular landscape, think it looks vaguely familiar, then see it re-created on a canvas—but for what feels like private, playful reasons.

The movie isn't striving to look as though it were painted by either man, an approach that, while pleasurable, would've been the most predictable way to express a painter's sensibility in a film about his life. I wouldn't presume to guess precisely what Mitta is up to here, because it's so confidently odd, but at times it seems to have more to do with expressing the ideas behind the men's work—their convictions that line, color, perspective or balance could be, or ought to be, used to produce specific effects and feelings. When Malevich shows up to offer an alternative to Chagall's warm, faintly Cubist brand of abstraction, and spouts inflexible theories about Suprematism—one of which holds that pure abstraction is the only truly new way to paint, because representational art is about finding different ways to render the same subjects—the screen behind Malevich fills up with geometric ribbons of color, like you'd see in a Malevich painting.

The film's tone is just as original. How to describe it? it owes a bit to the biographical films of Ken Russell, which teetered on the edge of camp and used facts as a springboard for wild fancy; but it's much sweeter. Although it takes history and artistic theory seriously, and there are moments of sadness and violence, it's not entirely a drama. Most of it is fun, if meandering. Some of the jokes are so off-kilter that the movie feels like a spoof of a biography of a great artist. The sillier bits could be spliced right into Woody Allen's "Love and Death."  At one point, art school students who are loyal to Chagall or Malevich argue their merits in a steam bath, and the scene turns into a nude brawl. "You understand nothing about Suprematism!" Punch. "Shut up, traitor!" Punch.

Mitta's screenplay draws on Chagall's memoir "My Life," framing his relationship to Russia, Judaism and his hometown, his eventual marriage to Bella, and his rivalry with Malevich as a first-person, "hero's progress" sort of story. But it never settles into the dour, ponderous mode that embalms most biopics. The movie begins with Chagall describing his own birth in 1897 on a night when Vitebsk was "ablaze with arson fires," a sequence that makes Chagall seem like the hero of a folktale. But just when you brace yourself for an onslaught of Importance, Mitta brings the whimsy, and it never goes away.

The first time we see Chagall as an adult, he's painting "Paris in a Window" in a Paris flat while stark naked. His buddies show up, put a crown on his head to to celebrate his first show, carry him aloft, and present him a prostitute, who unveils herself to him. Chagall earnestly protests that he's got a fiancee waiting for him at home, and suddenly we're soaring over a CGI-recreated Vitebsk circa 1913, rendered in eye-popping colors that are Chagall-esque. The next few scenes feel like something out of a romantic comedy. In the most delightfully silly of these, Bella's suitor Naum (Semyon Shkalikov) tries to woo her by reciting lines of Walt Whitman's poetry, then dives into a lake to retrieve her hat; Bella hears that Chagall is back in town and runs off to meet him before Naum can haul himself out of the water. Later, we see Chagall take some art students out to a meadow for a lesson in how to see with the heart. He falls back in the grass and the grass becomes a star field as he rhapsodizes about the "dearest, precious stars of my childhood." The rest of the scene alternates close-ups of Chagall's blue-tinted face and point-of-view shots of Chagall whooshing through space as if strapped to the nose cone of a rocket.

Things take a turn for the grim long before then—as if World War I weren't grueling enough, Russia is plunged into the Bolshevik Revolution—but the director's whimsical sense still predominates, and never entirely goes away. We realize we're into the terrifying post-revolutionary years when Chagall and Bella's romantic stroll through Petrograd is interrupted by a grand piano falling out of a window and landing a couple of meters away: Blong! A group of vandals attack the remains of the instrument like hooligans rolling a drunk, and we hear that awful piano-death noise again and again as they smash it. Then they chase and beat a stranger they've identified as "bourgeois" and toss him off a bridge into a river, and when his body hits the water, we hear another piano-death noise.

The film doesn't delve into its titular rivalry until the midpoint, when Malevich shows up to teach at a  government-run art school founded by Chagall and overseen by Naum, who is now a military commissar. There's a mounting sense of terror as Chagall's peace-love-kindness attitude is endangered by cold talk of Suprematism and the mob violence that seems intertwined with it. Enemies of the new order are interrogated and executed. Art, even beauty itself, are endangered by lust for greed and power, and the urge to dominate and bring enemies to heel. (Naum becomes a commissar after losing Bella to Chagall and persecutes him after that; the film is filled with characters like him, who use state power to settle private scores.)

If "Chagall-Malevich" had found a way to channel and sustain its unique energy, and make its characters into more than mouthpieces for particular ideas about art and politics, this film might have been a masterpiece. As is, it's an amusing, thought-provoking and surprising film that runs aground during slow spots, and that feels more like a patched-together collection of setpieces than a coherent story (or statement).

It is carried along by its originality and conviction, as well as by Bichevin's performance as Chagall. From some angles, the actor looks like a young Daniel Day-Lewis, and from others like the "SNL" star turned sitcom lead Andy Samberg, and that seems like perfect physical casting for a character who's been conceived as equal parts artistic genius, crusading idealist, romantic goofball and holy fool. Bichevin is the anchor for all of the director's flights of invention. When his Chagall says that life can be wondrous no matter how dire things get, you believe him. 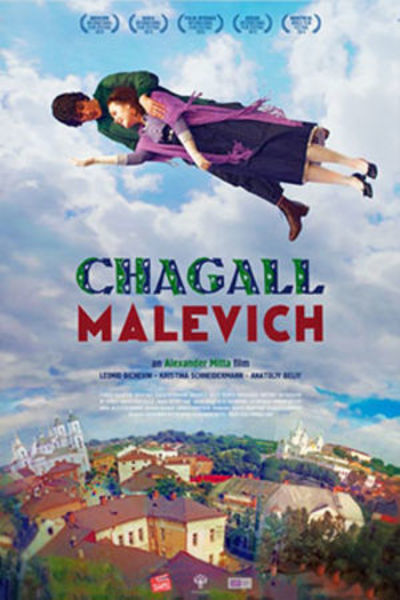