Sometimes nagging questions pop into my head at night just as I am on the verge of falling asleep. Did I lock the door? Did I put the leftovers in the fridge? Why doesn't Jennifer Aniston have a better movie career?

I can easily answer the first two just by getting out of bed and checking. Or, preferably, asking my husband to get out of bed and check. But that last query—which again consumes me, now that Aniston's latest effort, "We're the Millers," has arrived in theaters—is a doozy. I mean, Meryl Streep might have three shiny doorstoppers all named Oscar, but did she inspire a hairdo? Or single-handedly keep the gossip-rag industry in business with the ongoing soap opera that is her love life? Or so memorably take up the cause against oppressive workplace flair in the underappreciated classic known as "Office Space"?

After much tossing and turning on her behalf, I have concluded Aniston's problem boils down to this:  Despite being girl-next-door gorgeous, appealing to both males and females alike and just plain funny, she is her own worst enemy when it comes to choosing projects. The path to big-screen glory is rarely paved with mediocre romantic comedies and the sorts of girlfriend roles that have become her specialty. (At least Aniston tried to mix it up by going all Sundance dowdy and serious—otherwise known as Cher-ing it—as an unhappy Texas store clerk in 2002's "The Good Girl," but her "Friends" fans didn't buy it.) Even when the actress formerly known as Rachel Green has a hit like "Bruce Almighty" or "Horrible Bosses," she is rarely the primary focus. In other words, don't do "Marley & Me" if you don't play either Marley or me.

So when something as chuckle-worthy, mildly clever and surprisingly borderline genius at times as "We're the Millers" comes along, even those who are Aniston averse will heave a sigh of relief. For one, it is not a romantic comedy but something more ambitiously high concept—emphasis on high. Now that the legal demonization of marijuana use is slowly eroding, why not a middle-class answer to a stoner comedy that pays homage to "National Lampoon's Vacation" and extolls the virtues of family life?

It also is a pleasant step back from the crassness and cruelty that has tipped the raunchy R-rated comedy into the realm of pure torturous overkill (exhibit A: "The Hangover Part 3") that draws more groans than giggles. Instead, director Rawson Marshall Thurber ("Dodgeball: A True Underdog Story") and his writers have re-installed the sort of sweetness that nicely balanced the less savory aspects of "There's Something About Mary" and "The 40-Year-Old Virgin," leaving the audience bathed in warmth rather than feeling as though it needs a shower.

The tidy premise of "We're the Millers" could be easily tucked into one sheet of rolling paper: A small-time pot dealer (Jason Sudeikis, at his sardonic best) with a big debt to a drug lord (Ed Helms as a pinstripe-suited raging narcissist who collects marine mammals instead of sports cars) is forced to drive a monster RV over the Mexican border and smuggle two metric tons of grass into the U.S.

Knowing that a single white 30-ish male driver in grubby attire will immediately cause suspicion, Sudeikis recruits a fake family, including an overly pierced runaway girl (a forthrightly street-smart Emma Roberts) and a virginal 18-year-old latchkey kid (baby-faced Brit actor Will Poulter, a true find). As for a wife, he ropes in his contentious neighbor, a down-on-her-luck stripper, and that is where Aniston comes in. Once you get over the fact that few world-weary exotic dancers would ever possess—or afford—such a healthy Malibu Barbie glow, the actress settles in quite nicely into a role that fits her like a custom G-string. As a comedy couple, she and Sudeikis aren't exactly Cheech and Chong, but their well-matched timing and clashing attitudes often create comic sparks that erupt into laughter.

The audience will figure out pretty quickly where this road trip is heading: That the F-word-slinging fake clan will eventually bond while forming a loving and loyal family unit. Thankfully, the filmmakers keep finding unexpected detours to get there without resorting to such obvious stunts as having everyone light up joints together. Instead, most of the humor stems from this supposedly straitlaced foursome suddenly forgetting themselves and engaging in shockingly inappropriate behavior, abetted by an actual square motorhome-owning couple—the top-notch Nick Offerman and Kathryn Hahn (whose TMI dissertation on tampons is a welcome if squirm-inducing female spin on movie dirty talk)—and their sweetly innocent teen daughter.

That the most discomforting scene involves mere kissing shows admirable restraint, although one outlandish sight gag is straight out of the Farrelly Brothers' Genitalia-R-Us handbook. And the last time a Pictionary game proved this uproarious on the big screen was back when "Harry met Sally."

"Flashdance" also comes into the picture, and not just because no one appears to actually strip in the club where Aniston works. In one scene she manages to rescue her partners in crime by distracting a gang of thugs with a steamy bump-and-grind act, including a drenching shower. Needless to say, the shapely Aniston pulls it off without a hitch—even if she never actually appears without a stitch. If this gutsy performance leads to better opportunities—a remake of Demi Moore's ill-conceived "Striptease," perhaps—I might sleep better at night. 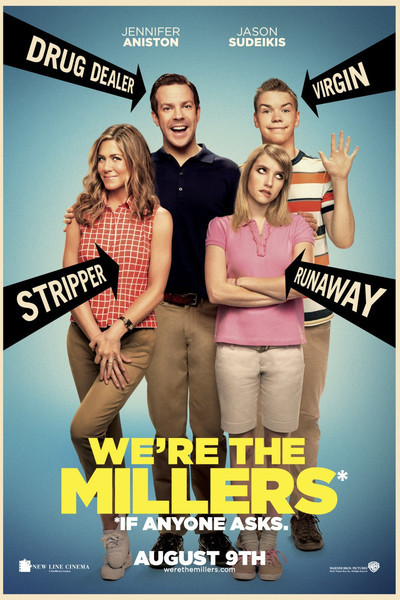 Will Poulter as Kenny