"Carnage Park" is the kind of movie where bullets only fly in slo-mo. It's the kind of movie where a head is blown into bits and the gore has become so rote you check your watch. Even considering a couple of good performances, effectively creepy monochromatic cinematography (Mac Fisken) and a nerve-jangling score by Giona Ostinelli, "Carnage Park" is an extremely empty experience.

The narrative does not proceed in a linear fashion, one of its many nods to Quentin Tarantino: it leaps forward and back in time, following one character before moving onto another. First, there's a slightly incomprehensible monologue-voiceover, delivered by actor Pat Healy in the role of psycho Vietnam veteran Wyatt Moss who has created a "carnage park" in his massive piece of property out in the desert, where people get trapped so he can then pick them off one by one. (Pat Healy, so wonderful as the father in the recent "Henry Gamble's Birthday Party," is barely recognizable here, down to the lunatic mix of blankness, enjoyment and intractability in his eyes.) Wyatt stalks around on his property, sometimes wearing a gas mask, and he is omniscient and omnipresent, assault weapon pointed at his targets from nearby hills or gullies. "God doesn't play favorites," he drones.

Then there's a leap back, and the story really gets started as a gas-guzzling beat-up Chevrolet careens through the desert, a screaming man bleeding to death in the back seat, as the driver tells him to hang on. The panicked driver is Scorpion Joe (James Landry Hébert) and the shot guy on the back is Scorpion Joe's sidekick, Lenny (Michael Villar). Turns out they have a hostage in the trunk, a traumatized girl named Vivian (played by Ashley Bell, from "The Last Exorcism" films) Scorpion Joe and Lenny just robbed the tiny bank in the tiny nearby town, dragging Vivian, who was at the bank begging for a loan to save the family farm, along with them for collateral. Little does Scorpion Joe know that he's driven onto the land owned by a raging serial killer, the periphery lined with electric fences. Alan Ruck, the local sheriff, pays Wyatt a tense visit to ask about the recent disappearances of a couple of people. Wyatt, who patrols his land as though he lives at Area 51, won't allow the sheriff to take a look around.

The brave Vivian eventually finds herself alone, staggering through an impressively vast and bleak landscape, trying to understand what she has stumbled into. There is a "graveyard" of beat-up rusting trucks, there's a record player in an empty dirt space playing a record warped in the sun, there are loudspeakers everywhere, blasting the sounds of Wyatt cackling with glee. No matter where she hides or what she finds, Wyatt is waiting, unseen. Ashley Bell conducts Vivian's growing realization of the hopelessness of her position like a maestro. It's not a one-note Scream-Queen performance. She starts off panicked and upset, begging for her life. She then erupts in screaming horror as she realizes her predicament, before then down-shifting into calculated and panicked planning to get herself out of there. It's a hell of a performance. Her small frame quivers with adrenaline, her arms stick out stiff at her sides, ready to defend whatever it is that might come at her.

The look of the film, which takes place in 1978, is dusty, rusty and dry. The sky spreads above the carnage in a blast of white. When it gets dark, the darkness is total. There are one too many shots that pan down (or up) from the sky to the land and back, but the look is so unremittingly inhospitable that when Vivian finds a canteen of water, the whole film sighs with relief. Beloved character actor Larry Fessenden has a cameo, but overall the cast is small, and the majority of the film features Bell racing from one gory aftermath to another.

Wyatt Moss lives and breathes an End-times survivalist atmosphere, borne out of his experiences at the hands of the U.S government in the Vietnam war, as well as his anger at how veterans were treated once they returned. The dots don't quite connect, and his opening monologue—something about how mental hospitals have released unstable veterans into the wild—provides no illumination.

The all-seeing serial killer has been so done to death that Wyatt Moss just seems "same ol' same ol' psycho" as opposed to a frightening anomaly of evil. The television show "Criminal Minds" is going on 12 seasons now, and the series' message is twofold: 1.) There is a serial killer under every rock in America. 2.) A woman who dares leave her house will probably find herself chained up in a sex dungeon. The 1932 film "The Most Dangerous Game," based on the short story of the same name, features shipwrecked Joel McCrea having to hide from a lunatic Russian count who lives on the island and hunts the human beings who drift up on his shore. 2006's "The Hills Have Eyes" also features a desert, a psycho and people stranded there who are hunted for sport. There's nothing wrong with a director paying tributes to those influences he loves. But when you can practically see all of the items on the checklist being ticked off (Peckinpah, Tarantino, grindhouse, etc., check!), when you sense that that's all there is ... well, that's all there is. 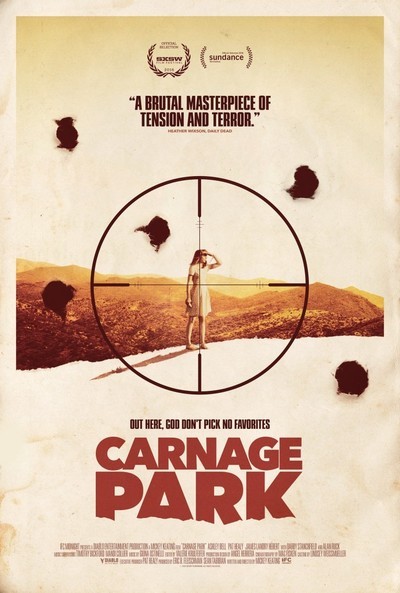