Movie biopics are often derided for compressing a historical figure’s life into something resembling a greatest-hits package. This is true only of bad biopics. Biopics usually come in two flavors. There are those that dig beneath the highlights in order to get at the life force that made a single life stand out from all the rest. "Malcolm X" and "Nixon" are gold standards of this type. Then, there are biopics where filmmakers take a specific moment in time and use it to illuminate both its historical ramifications and the lives of those who made history. "Hitchcock," "Frost/Nixon," and "Good Night, and Good Luck" are prime examples.

Sebastian del Amo’s "Cantinflas" is an ambitious biopic that attempts to combine the two by telling the life story of the pioneering Mexican comic actor while dramatizing a crucial week in the career of producer Michael Todd in his attempt to wrangle an international cast for his big Hollywood production, "Around the World in 80 Days." The result, I’m afraid, is a big disappointment, a disjointed mess that tries to create a point-counterpoint narrative with these two savvy showmen, which inevitably tips the scales in favoring one of them. The problem is, it’s not the one you think.

For most American moviegoers, Cantinflas is the answer to a trivia question: Who was the biggest movie star in the world, only to rival Chaplin’s Little Tramp in popularity, who never conquered Hollywood? Born Mario Moreno, Cantinflas was a boxer and bullfighter before discovering he had a gift for improvised comic riffing. The Cantinflas character became an almost folkloric hero as he used the guise of an earnest peasant to satirize and mock those who needed to be taken down a peg or two. His popularity was such that he was able to demand complete creative control over his movies. (He made over thirty pictures.) As leader of the actors’ union, he stood up against the encroaching corruption in Mexico. He was married to the same woman for his entire life. When he died at age 81, his funeral turned into a three-day celebration that was attended by thousands.

Michael Todd led an equally rich life. After having huge successes on Broadway as a producer, he first broke into movies by creating the Todd-AO widescreen process, a process that is considered by some to be even better than Cinerama. "Around the World in 80 Days" was conceived as a star-studded spectacle that would be peppered with cameos from stars around the world that would guarantee it to be a worldwide success. As dramatized in "Cantinflas," the only problem with Todd’s grand vision was getting superstars to appear in the movie without having to pay their price. Of course, Todd eventually triumphed and "Around the World" would go on to win five Oscars, including Best Picture.

Separately, these two stories offer the potential for good drama, but the screenplay by Edui Tijerina and del Amo uses a back-and-forth structure that’s supposed to create tension but instead keeps breaking it. The result is an imbalance in the storytelling. The movie is called "Cantinflas," but it turns out the Todd storyline is the one with the dramatic weight. There’s a light, almost finger-snapping quality to the Hollywood sequences that leads to impatience every time we’re forced to go back to Mexico, especially when we realize the Cantinflas arc lacks any real dramatic conflict. (As the movie plays, Todd struggles more than Cantinflas.) The scenes set in 1955 Los Angeles are given a sunbaked look that for once doesn’t rely on bright yellow filters. The Mexico sequences have a muted color palette that doesn’t rely on dust and grime for its effects. The two storylines are so visually detailed that we really don’t need title cards informing us of the passing of time.

The movie tries to find a correlation between the two mens’ lives, but there really isn’t one. It’s all surface. Cantinflas’ life is reduced to highlights minus much dramatic force. (We’re almost halfway through the movie before we see him on a movie set.) His comic talent and rapport with the public is mostly told to us, not shown. The staging of the scenes involving moviemaking have no juice. A subplot involving union corruption is sketchy at best. (We see the exchanging of an envelope and that’s about it.) This is too bad because Oscar Jaenada looks like he’s capable of handling the role. He has a loose-arm way about him in the early scenes that’s quite winning, but as written, Cantinflas is more of an icon than a character. Jaenada is real good in scenes where Cantinflas shows flashes of cruelty, as in when he fires a director who doesn’t understand his brand of improvised comedy. The script has Mario Moreno buying into his Cantinflas persona and thus taking the joy out of him. Problem is, we never get to know the character before he becomes Cantinflas. He’s rather bland in the opening scenes. By the time Cantinflas hits the stage we’re forced to accept his greatness as a performer.

At least the Michael Todd section has a little bit of suspense. There’s a ticking-clock component to these scenes as Todd races around town to get contracts signed before a major press conference. Michael Imperioli is a lot of fun as he lets us see Todd’s desperation while never breaking a sweat. I also liked the performance by Ilsa Salas as Cantinflas’ wife Valentina. It’s through her performance that we sense the change in his personality. The best scene in the movie is when Cantinflas comes home and finds Valentina upset because he forgot about an important doctor’s appointment. She was all alone when she found out she’s unable to have children. The scene climaxes with Valentina weeping and Cantinflas walking away as a thunderstorm rages and a Mexican ballad is heard on the soundtrack. Some might laugh at the over-the-top nature of the scene, but it’s in keeping with a long and proud tradition of Mexican melodrama.

The movie could’ve used more of that. It shouldn’t matter that the movie inflates "Around the World in 80 Days" with a level of importance that I’m guessing isn’t called for. It’s a movie known by reputation more than anything else these days. (It beat out "Friendly Persuasion," "Giant," "The King and I" and "The Ten Commandments.") The movie backs itself into a corner by ending with Cantinflas winning the award for Best Actor. The bad joke of this triumphant climax is it takes place at the Golden Globes. (The filmmakers are shrewd enough not to mention this fact. It’s like an implicit acknowledgement that even the filmmakers don’t think "Around the World" is all that great.) None of this would matter, but the shoehorning in of one of these story arcs into the other is constantly pulling us out of the movie. Imagine the movie "Hitchcock" except half the running time was given over to a biopic of Anthony Perkins. While a biopic of Perkins’ life would be a fascinating study in duality, it unfortunately has no real connection to the story of the making of "Psycho."

There’s one more important note that needs to be made about this movie. "Cantinflas" is being distributed by Lionsgate as part of their ongoing distribution strategy of releasing Spanish-language movies in the U.S. aimed primarily at Spanish-speaking moviegoers. Good for them. Clearly, their success with Tyler Perry showed them there are untapped markets craving product. It seems the crucial difference between the movies aimed at African-American audiences and Latino moviegoers is a willingness to court mainstream acceptance. The Spanish-language releases have shown an audience is there, but a sense of isolation hangs over these movies. There is great irony that "Cantinflas" the movie shows Cantinflas the man telling Michael Todd that he’s going back to Mexico and isn’t really interested in Hollywood. (Whether he was unwilling to deal with the inevitable racial barriers he would have to overcome or just liked being the one at the top in Mexico is never fully articulated.) "Cantinflas" is a movie that isolates itself from its own audience. 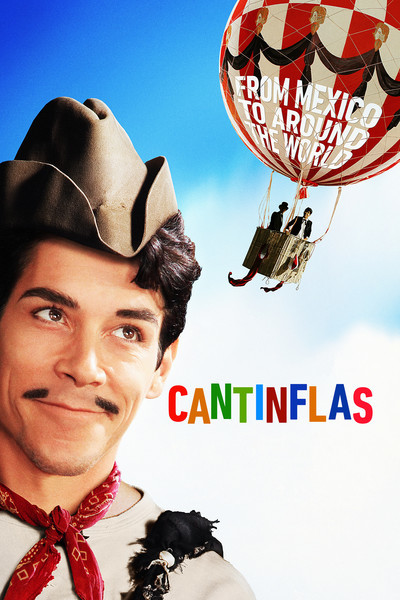