All I knew going into "Byzantium" was that it marks director Neil Jordan's return to the genre he and novelist Anne Rice helped make viable for Hollywood studios almost twenty years ago, with "Interview with the Vampire." This was not an enticement. I find the entertainment industry's ongoing vampire gold rush, and pop culture's fascination with sexualized gore in general, to be insipid, boring and ghoulish in a trivial way that's unique to folks who haven't experienced much real violence or loss: goth slumber party. What a pleasure it was, then, to be won over by this exquisite, lovely film, in which contemporary characters struggle to suspend their disbelief in vampire lore while Jordan's eye for formal beauty and truthful performances suspends ours. There is a very true moment in David O. Russell's film "The Fighter" where Amy Adams is trying to stay angry and distrustful of her pathetic junkie brother-in-law Christian Bale but her heart can't help but reach out to him when he pleads sincerely for understanding. Noticing some cake icing smeared on his forearm, she says, "What's that blue shit on your arm?" with irritation melting into concern. That's how this bluesy vampire melodrama "Byzantium" worked on me.

The plot is almost irrelevant, but the way screenwriter Moira Buffini (adapting her own stage play "A Vampire Story") weaves threads of history, folklore, feminist spirit and universal themes is striking. The vamps we're obliged to care about here are a pair of traveling female hustlers who've spent centuries navigating a man's world using their wits and wiles with cruel precision. The elder of the duo, Clara (Gemma Arterton), pays the rent working a profession even older than vampirism. She's built for it: Clara is a luscious Amazonian stunner who doesn't need the powers of hell to put men into a trance.

In the era of superheroes tossing around CGI skyscrapers, we forget the visceral power of human beauty, ardently photographed. Here Jordan, costume designer Consolota Boyle, production designer Simon Elliot, and genius director of photography Sean Bobbit ("Hunger") conspire to hold us in thrall every time Arterton appears. Whether in a bodice and shawl or a skintight number and stilettos, she doesn't move through the frame so much as slip into it and lead it gently along, the same way she coaxes men to give up their money and their lives. Arterton's sarcastic sauciness is a wonder.

So is Saoirse Ronan's angelic brooding as the younger vampire, Eleanor. Closeups of Ronan stricken with grief, longing or deep reflection are simply startling. In one shot in which she's seized by a vision, her azure eyes, chestnut hair and red riding hood seem to linger after the shot is gone.

Jordan's casting choices, down to the smallest role, are inspired in their realism, particularly Caleb Landry Jones as Frank, the shy, ailing neighborhood boy Eleanor falls in love with against her centuries-honed judgment. Frank is pale and fragile, with an endearingly homely/handsome face that comes alive whenever Eleanor is around. I looked at this kid and I heard Otis Redding singing to his woman.

Ronan and Jones take us through the tender rites and crossed signals and yearnings of young love. It's an exquisitely sweet, sad portrait of two outcasts desperate for a connection. Unlike Eleanor, Frank may not have spent hundreds of years forced to keep his distance from people, but for all his angst, it may as well have been a thousand. Jordan lets these moments breathe, and his actors don't reach for the notes, simply finding them in each other's eyes.

After the masterful Swedish and American adaptations of John Adjvide Lindquist's novel "Let the Right One In," it's a surprise how well "Byzantium" treads on their turf and extends it even further into the world of grownups. The teen romance plays out against a backdrop of adults constantly faced with excruciating choices and sacrifices. Buffini's story deepens as it unfolds, putting Clara's apparent recklessness and psychopathic self-interest in a different light. An old boy's network of ghouls is tracking her, waiting for her to commit the slightest infraction as an excuse to terminate her membership and thus her and Eleanor's immortality. (If Hillary Clinton already has a favorite vampire movie, "Byzantium" is about to replace it.)

"Byzantium" rejects a popular method of establishing realism in recent escapist films: recording the action with multiple handheld cameras, like a street fight captured by various iPhones. While exploiting the textures of weathered real-world locations as flavorfully as the kitchen sink realist Ken Loach, Jordan and Bobbit stick to elegant, balanced movements and classical editing that make even a bumpy foot chase feel like a waltz. The color palette of rust, teal and chalk white put everything in grand, haunting relief. Javier Navarette's mournful score is the blue icing on the cake.

So, given all the enthusiasm expressed above, why do I begrudge this movie a half a star instead of giving it an even four? Well, the violence. Jim Carrey recently renounced his participation in the upcoming violence fest "Kick-Ass 2," citing a "change of heart" in the wake of the Sandy Hook killings. I feel the same sick lament at "Byzantium"'s graphic beheadings and throat-slashings. It's a crude way to goose the audience, given Jordan's fine touch.

It's not just that people who get off on such gotchas could more directly whet their appetites by watching real slaughters on YouTube. Pornographic violence has been mainstream in movies since the late 1960's, and it's one of those tiresome relics that could easily go the way of Stepin Fetchit and married characters in separate beds. Filmmakers with no craft or imagination and generous budgets use it out of desperation. Sure, Jordan uses it here with a lot more artistry, often in response to operatic emotions, as when he positions a severed head on a stair step during a heartwarming moment (for a bit of Paul Verhoeven-like poetic irony). Viewers who will inevitably pick apart this film's plot inconsistencies while failing to note its graceful curves will consider the killings the film's bright spots, so perhaps it made commercial sense to include them. But it's still far too cheap in effect for what it costs in encouraging an already coarsened multiplex crowd to view human carnage with a butcher's yawn.

Sorry to go off on a tangent, but "Byzantium" is the kind of film that provokes such weird sensitivity. It's a reminder that even escapist fantasies reach into real life, whether it's to give or to steal. 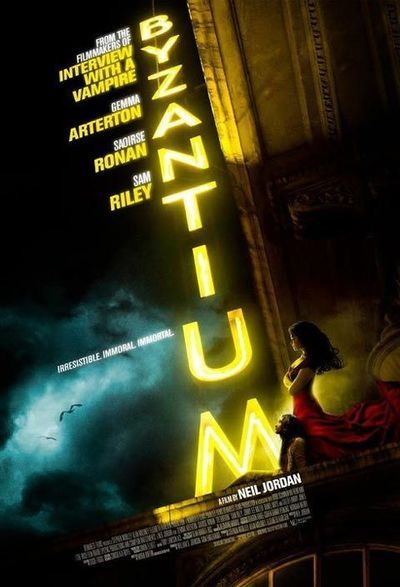