Testicle jokes open and close “Buddy Games,” the sort of shock-jock comedy whose genital fixation reveals the character of co-writer/director/producer/star Josh Duhamel’s cretinous celebration of guys being guys. It’s just one guy’s testes, by the way, though they’re the topic of frequent discussion: King Frat Shelly (Dan Bakkedahl) loses his equipment (both bits) after an unfortunate paintball incident involving his shrewish wife Nikki (Lucie Guest) and nebbish BFF Bender (Nick Swardson). Shelly has it coming though since, in the opening scene, he is shot in the scrotum after teabagging another friend, who’s passed out at the time.

The rest of “Buddy Games” is a tortured, dim, and unbearably neurotic comedy about five self-styled alpha males who think that their lives would be so much better if they could just comfortably waste their own money on the titular competition—a “Jackass”-style gauntlet of gross-out competitive stunts—and never have to worry about whether or not they’re nice guys. They’re not, by the way, though that’s probably obvious from the establishing scene where Shelly slaps Mark (Randy Rafuse) in the face with his low-hanging fruit while boasting about not having showered for three days. If this guy doesn’t deserve his comeuppance, I don’t know who does.

Still, Duhamel and his two co-writers pay a lot of lip service to the proud heterosexual tradition of rich men negging each other, and then applauding themselves for their “tough love,” as Zane (James Roday) boasts later on. Rich guy Bob (Duhamel) treats his friends to a lavish obstacle course that looks like a wealthy mook’s version of “American Ninja Warrior,” complete with electric eels, mud pit, and a “big-ass waterslide.” Bob waits five years before reinstating the Buddy Games because it takes him half a decade to learn of Shelly’s predicament (and only because his mom tells Bob). Shelly’s buddies tried to reach out to him between now and then, but he didn’t respond to them (“I just had a lot on my mind”). That little narrative ellipsis is more telling than the rest of the movie’s convoluted plot: Shelly didn’t want to talk to his friends, so they shouldn’t have to feel bad for him.

But they do feel bad, especially Bender, who raises $10,000 in cash to enter the Buddy Games, though the competition doesn’t have an entry fee, by prostituting himself and selling vodka in his mini-van (don’t ask, it doesn’t get funnier). Bender also tries to appease his guilt by offering Shelly a refrigerated humidor full of his own semen. That gift is predictably the set-up to a dumb third act punchline later on, as one might expect based on the comedic law of Chekhov’s Swimmers. But that doesn’t stop Bob and the gang from wringing their hands while also boasting about how accomplished and vain, but also self-conscious and ultimately generous they all are. They kid because they love, but really, they only love themselves. Or parts of themselves.

“Buddy Games” has several unfunny, drawn-out gags about Hollywood, effective laxatives, and horny women. Jokes about Hollywood or “La La Land,” as a couple of characters call it, are the most convincing since they’re seemingly the most personal: insecure extra Durfy (Dax Shepard) makes himself a target of cynicism, I mean criticism, just by being enthusiastic and hopeful about his meagre roles. Durfy’s friends advise him that he should work with Mark Wahlberg—“Entourage” star Kevin Dillon is also in the movie—or maybe channel some of his pent-up frustration into his auditions (“I self-tape,” he whines in a later scene). Durfy is also repeatedly made fun of for being a big-talking small fry, like when he forces co-star Neal McDonough (playing a version of himself) to take a selfie with him, or when Durfy shows his friends his latest work, a military commercial where he plays a stay-at-home dad. “Don't look so down, Durf,” Dillon’s character says: “Maybe there's a tampon commercial in your future.” Durfy also enjoys avocado toast, which is the sort of joke that will probably go over bigly with Andrew Dice Clay’s remaining fans.

Duhamel and his buddies pander aggressively to a certain aggrieved macho type, the kind of person who probably thinks that “tough love” excuses de rigeur insensitivity and damp jock strap humor. That’s the funniest thing about “Buddy Games”: its creators pelt viewers with rancid, uninspired jokes about sharts and icky women (of all ages) in order to defend their inalienable right to be big, stwong men who sometimes like to ride dune buggies, shoot arrows at each other, and seduce horny but homely (ie: not Instagram-influencer-quality) barflies as a bit whenever they’re not otherwise re-affirming their heterosexuality. Because “I could suck way harder than you” and “you know how sensitive he is” are the same note in different emotional registers, and neither one is especially entertaining. That kind of chest-puffy dialogue is revealing though, as is Duhamel and his co-writers’ total lack of interest in Mark. He was drunk on absinthe, by the way, which sounds like a variation on the avocado toast gag. I guess he had it coming, too? 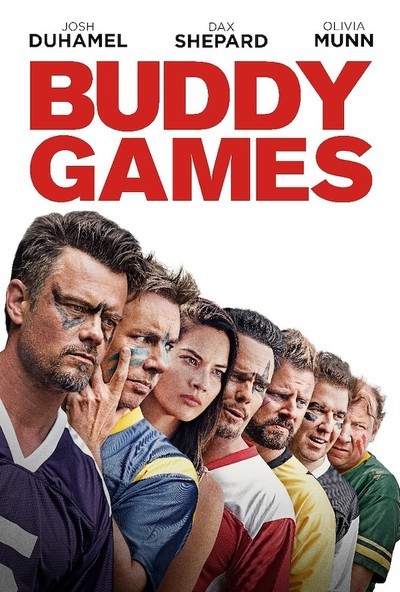