Netflix had an incredible 2017, anchored by three critically-acclaimed films out of Sundance (“Mudbound”) and Cannes (“The Meyerowitz Stories [New and Selected]” and “Okja”), along with a seemingly endless supply of new shows, including fantastic programs like “Mindhunter,” “Dear White People” and “Master of None.” And yet the irony of all of this is that what will likely be their biggest film of the year—certainly their most expensive at a reported $90 million—is David Ayer’s “Bright,” a gaudy, overstuffed piece of blockbuster trash. However, if you think about it, the arrival of “Bright” makes perfect sense. Netflix has always wanted to compete with the big dogs at the studio, and you can’t name a major studio that doesn’t have an overdone, stupid blockbuster or two on their resume every year. Now Netflix has one too!

It’s tempting to say that “Bright” is a reboot of "Alien Nation," or a modern hybrid of “District 9,” “The Lord of the Rings,” and “End of Watch” (a much-better film also helmed by this film’s David Ayer), but that might give the impression it contains a fraction of the quality of those films. No, what “Bright” reminded me of most of all was the glut of bad buddy cop movies that came out in the wake of the success of “Lethal Weapon,” star projects designed to make a quick buck on marquee names but with almost no artistic quality whatsoever. And many of them had similarly out-there concepts. I’m thinking of films like "Red Heat" or “Stop! Or My Mom Will Shoot”. Yes, this movie reminded me of Estelle Getty.

Written by Max Landis, “Bright” imagines a world in which fantasy creatures like elves and orcs live alongside human beings. If you’re thinking, “oh, no, this means we’re going to get a lot of really basic lessons about understanding other races through a genre lens,” you’re not wrong! It’s mere minutes before Will Smith’s Officer Ward says “Fairy lives don’t matter,” and we’re treated repeatedly to paper-thin parallels between this world and our own. You see, Officer Ward has a partner that nobody likes named Jacoby (Joel Edgerton, easily the best thing about this movie). Why don’t they like him? He’s an orc, and they don’t trust that he won’t side with his people over his profession. In fact, everyone is convinced he recently did so after an orc shot Ward and escaped while Jacoby was chasing him. Over and over again, Landis treats us to a truly vague commentary on racism through the lens of “orc-ism.” And to give you an idea of how muddied and unclear this allegory is, Ward asks Jacoby “Are you a cop first or an orc first,” as we’re watching cops beat orcs in the street. Huh? Does he have to be a bad cop first? I don’t get it. And I don’t think that the movie does either, other than to show that there's something that looks like a centaur cop involved in the beating. Neat.

On one long night in this magical land (Ayer loves his one-night movies), Ward and Jacoby stumble upon a magic wand because, well, why not? As you might imagine, wands are powerful currency in this world as they can make the impossible possible. They’re kind of the “one ring” of “Bright.” But only a “bright”—yes, the name actually refers to something in the film, not just how clever the filmmakers think their concept is—can hold a wand without exploding. Still, everyone wants the wand, and so Jacoby, Ward, and a new friend named Tikka (Lucy Fry), who is basically the result of Landis saying “How can we get a character like Milla Jovovich’s from “The Fifth Element” into this movie,” have to fend off corrupt cops, the feds (including a wasted Edgar Ramirez), and a powerful group of elves who lost the wand in the first place, led by an evil Noomi Rapace.

Smith, Edgerton, Rapace—it’s a decent crew, and the concept could have been developed into something intriguing if Landis wasn’t so in love with it that he forgot to write decent dialogue. The banter here is insanely sophomoric, caught between Ayer’s “realistic cop movie” aesthetic and the comic book movie that Landis wanted to make. Nonsense lines like “If you act like my enemy … you become my enemy,” will merely have you scratching your head and wondering if anyone read the script before they approved the budget or if they just so adored the concept that they didn’t care. Clearly, this is the kind of exaggerated nonsense—“this is a nuclear weapon that grants wishes” and "that's when the triple stupid shit is gonna start" being two more primo bits of stuff that only work if you're high—that could have been effective with a director like Robert Rodriguez to inject it with enough style to make it tolerable. The fatal flaw really is that Ayer and Landis don’t seem to be making the same movie, although I’m not sure too many people could make the fantasy world of this flick and the action/buddy-cop movie blend. It’s an absolute mess.

It all culminates in an extended scene that’s basically the interrogation/torture scene out of those ‘80s and ‘90s buddy action movies only this time people are screaming “Where is the wand” over and over again for what honestly feels like eternity. It’s a scene that stands with the worst of the year in terms of structure and screenwriting, and it’s where any hope that “Bright” might bring its bizarre elements together faded completely for me. I started to think of the worst summer blockbusters of 2017 like “Transformers: The Last Knight,” “King Arthur: Legend of the Sword,” and “The Mummy,” and I realized how easily this ridiculous waste of money fit in with those crowd-displeasers. They may have been doing so in terms of quality filmmaking before, but “Bright” proves how much Netflix truly is running with the big dogs now. 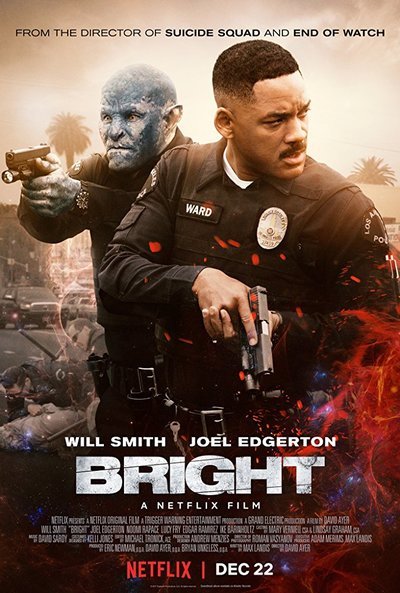 Will Smith as Scott Ward