Who, exactly, has been looking forward to “Bridget Jones’s Baby”?

Hard to say, considering the odds of it being a worthy continuation seem stacked against it. Take Father Time, for one. It has been 20 years since the original bestseller was released that spawned not just a raft of chick-lit imitators but also two films, the 2001 romantic comedy hit “Bridget Jones’s Diary” and its inferior 2004 sequel, “Bridget Jones: The Edge of Reason.”

The passage of time is also reflected in the characters. The central 30-something working gal, still a singleton, is now at the brink of middle age. Not that there is anything wrong with that. But when a certain male critic viewed the trailer, he took offense that the adorably effervescent star of the franchise, Renée Zellweger, had the temerity to look like someone who is in her 40s. But it does suggest the target audience, the Bridget brigade as it were, might be shifting to a more mature, less hip demo.

Then there is the physical absence of Hugh Grant, who declined to return as Daniel Cleaver, Bridget’s former boss and caddish ex-paramour.

As for this avid fan of both the first book and film, I can’t have been alone in wavering back and forth between cautious optimism and abject fear that the latest big-screen chapter with its soap-opera-ish “who-done-it?” paternity plot involving two possible baby daddies—returnee Colin Firth and Yank newcomer Patrick “McDreamy” Dempsey—would fail to reprise the relatable yet distinctly screwball essence that so delightfully informed “Bridget Jones’s Diary.”

Therefore, I take pleasure in announcing that this update on Bridget’s always-complicated affairs of the heart is more often than not a bundle of joy to watch and a far cry from being a pail of poopy nappies.

It appears that Emma Thompson, who remains the only person to ever win Oscars for both acting (1992’s “Howards End”) and screenwriting (1995’s “Sense and Sensibility”), assumed the guise of a fairy godmother while doing a total rewrite of an already-existing script. Some very witty pixie dust has been sprinkled over this enterprise, even if the climatic birth sequence hits the usual big-moment notes—water breaking, a mad dash to the hospital, labor-pain agony, etc.

Thompson also proves a perfect foil to Zellweger onscreen as a no-nonsense obstetrician who takes wicked delight in describing her patient’s pregnancy as “geriatric” on a regular basis. She also gets points for having her doctor shoo the potential fathers out of the room when matters get down to the nitty gritty, noting that her own husband always left at those times because, as he said, “It was like watching his favorite pub burn down.” As for how she handles Grant’s no-show, it is quite ingenious.

Back from a six-year acting hiatus, Zellweger herself is still perfectly attuned—lilting Brit accent, messy pratfalls, lusty dalliances and all—to the role that led to her first lead Academy Award nomination, a rarity for a comic performance. Besides being older, she is also slimmer, something that Bridget happily declares at least initially before pregnancy enters the picture. She even does a sort of SoulCycle class and proudly notes at one point that she stopped smoking “1,891 days ago.”

But Miss Jones hasn’t changed completely, as the opening scene cutely parrots the one from “Bridget Jones's Diary.” She celebrates her 43rd birthday alone in her cozy London abode. She dons PJs, guzzles wine, blows out a single candle on a cupcake and lip-syncs to the same pity-party ode, “All By Myself”—until she switches musical gears and giddily hops about to House of Pain’s rap ditty “Jump Around.”

There is a welcome sense of familiarity in “Bridget Jones's Baby”—but also of the fresh and au courant. It helps that “Bridget Jones's Diary” director Sharon Maguire is back along with several key cast members, including priceless comic input from Jim Broadbent and Gemma Jones as Bridget’s dad and mom (who, inconveniently, is a local political candidate running on a family values platform).

But no returnee is more essential than the only man in the world worthy of playing barrister Mark Darcy. Who else besides Firth could make being a mirthless uptight conservative so sexy? Every time you might wonder, “What does Bridget see in him,” he goes and says the absolute right thing in the most sincere way. Alas, how the two, who never did get married despite what “Bridget Jones: Edge of Reason” suggested, initially reconnect before hopping into bed is best kept a “wait-and-see” secret.

As for what is new, Bridget is still prone to blunders but as a respected TV news producer, she no longer seems quite so insecure. Not even when she gets a younger boss complete with blood-red lipstick and a severe hairdo who is tasked with “rebranding”—ie. dumbing down—the show. These segments play like a slapstick version of “Broadcast News” for a social-media-obsessed era, bright, funny and on the nose.

Bridget’s friends still fret over her husband-less status and the ever-nearing expiration date on her ovaries—even if she is in constant demand as a godmother. And her love life is currently non-existent to the point that her box of emergency eco-friendly condoms are barely useable. But then a millennial co-worker tricks her into going to a boho outdoor music festival, complete with glamping yurts and a cameo by Ed Sheeran. That is when she drunkenly stumbles into Dempsey’s luxury outdoor digs after previously being rescued by him, Prince Charming-style, and decides to stay the night.

Yes, a pregnancy test soon follows and the script goes to great lengths to keep us in the dark about the identity of the baby’s father along with Bridget, Mark and Dempsey’s Jack Qwant, who just happens to be a bachelor billionaire founder of a popular match-making website. That I was invested in the not-hard-to-guess outcome is primarily because I did indeed want to be in the company of this tangled trio.

There is a certain sloppiness to the continuity and editing at times, such as when an undressed baby is suddenly shown clothed seconds later. But I was mostly enjoying the fact of how this is a rare female adult character in a mainstream movie who continues to be allowed to enjoy casual sex—in addition to having a baby out of wedlock—without suffering from guilt pangs. Bridget Jones was and is the original “Sex and the City” girl. And it is good to see her again. 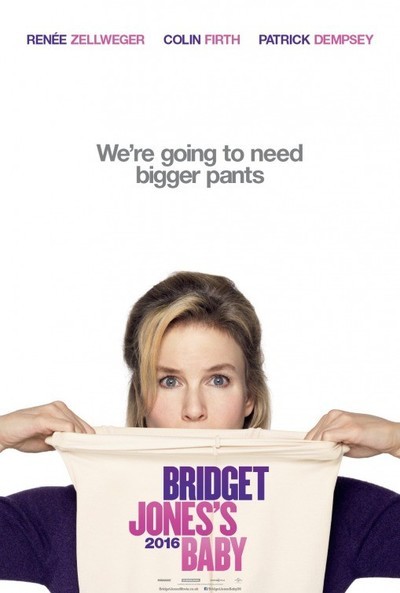 Rated R for language, sex references and some nudity.

Writer (based on the characters and story created by)