Blame “Nebraska.” Blame “Little Miss Sunshine.” Blame “Rain Man.” Heck, let’s blame “National Lampoon’s Vacation,” too. Yes, the scenic family road trip that starts at dysfunction junction, hits a bunch of emotional speed bumps yet somehow reaches a place of mutual peace, love and understanding is one of the triter tropes in cinema. However, the best way to elevate such typical travel yarns is to gather an engaging cast of capable actors to distract the audience into thinking they are having a good time. Sort of the way a game of “I Spy” can keep the kiddies pre-occupied for an hour or so in the car.

I was definitely glad that my little eye spied Christopher Plummer in “Boundaries” as Jack, a ne’er-do-well barb-tongued weed dealer who reaches out to his estranged Seattle-based adult daughter, Laura (Vera Farmiga, fabulously flustered in pique angst-ridden mode), after his outlaw ways get him kicked out of his senior living accommodations. When I first saw the actor in “The Sound of Music” as a young lass, I found his Capt. von Trapp to be quite the catch once he put down that shrill whistle and pitched woo with Julie Andrews. Lo and behold, he is even more dashingly handsome deep into his eighties as he relishes his bad-boy role, cagey-old-coot class. While Farmiga’s Laura has her charms, even if she is in a constant state of agitation over her deceptive daddy, director and writer Shana Feste (“Country Strong,” “Endless Love”) wisely gives most of the best lines and flattering camera angles to her leading man.

Not that his female co-star doesn’t get a fairly fleshed-out character as well. It’s just that early on, Laura notices that the cute jean jacket that she regularly wears smells like pee—and we quickly surmise why. She is addicted to rescuing stray dogs and the occasional cat or two. The animals are fun to watch (and act as an obvious fill-in for a real family), but I kept hoping she might give her coat a good wash at some point. As Jack tells her, “You are like the Pied Piper of mange.” However, there is little time to spare once her bullied 12-year-old son, Henry (Lewis MacDougall from “A Monster Calls”)—who has a penchant for sketching adults in imagined explicit naked poses that seemingly expose their less-than-savory souls—gets expelled. Laura lacks the funds to send him to the private art school that he desperately wants to attend, so she makes a deal with the devil—namely, Jack. She will drive him to L.A. in his ancient gold Rolls Royce to live with her kooky younger sister, JoJo (Kristen Schaal), who has a weird fondness for “The Karate Kid.”

Unbeknownst to Laura, Jack has stashed $200,000 worth of marijuana in a duffel bag that is hidden in the trunk. He insists on making stops along their West Coast route to visit friends from his hippie past—who just so happen to be customers, too. Little surprise that they turn out to be a group of Buddhist monks, a typically spacey Christopher Lloyd, a typically smooth Peter Fonda and a typically shady Bobby Canavale as Laura’s ex-husband. Jack declares himself an a-hole—and it is hard to disagree—but it is clear that when he recruits his grandson as his partner in crime, he also wants to make amends for his footloose past. When Henry makes a joke about not wanting to be molested, Jack snarks at the wan baby-faced pubescent, “You wouldn’t get molested with a bow in your hair.” Such snide commentary is apparently his way of showing love.

I sort of like the way that Jack, who further ensures that his daughter will do his bidding by telling her that he hasn’t got much longer to live, uses adult diapers to wrap up his contraband goods. But there is little else that is original about the situations that the trio and their four-legged friends run into along the way: Car trouble, police stops, heated arguments, a rather awkward Jacuzzi invitation, a foiled house break-in, a dance routine to “Gloria” and the too-late realization that JoJo’s apartment isn’t big enough for two. Basically, “Boundaries” ends the way most road trips do—by running out of gas. But being in the presence of Plummer these days is always time well spent. 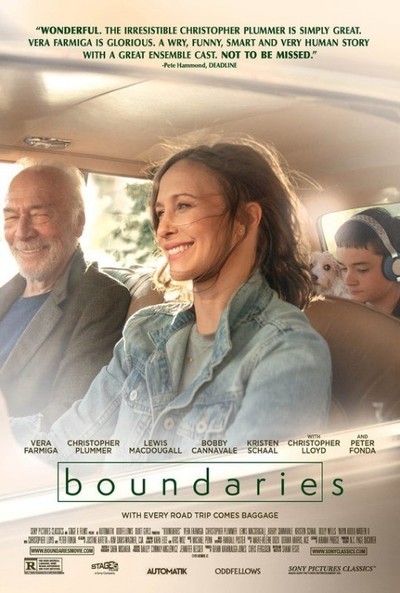